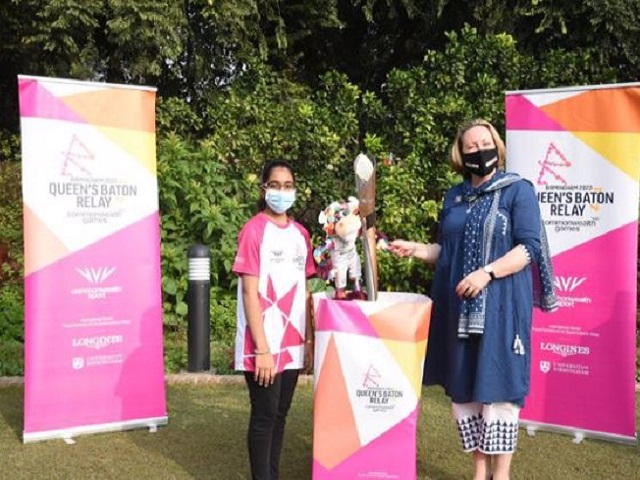 Vinisha  Umashankar, a student innovator, was selected as India’s baton bearer at the 16th official Queen’s Baton relay (held from January 12 to 15). The 15-year-old is a student innovator turned environmentalist from Tiruvannamalai district in Tamil Nadu.

Vinisha had inspired the world with her solar ironing cart, which uses solar panels to power a steam iron box. She won the Dr APJ Abdul Kalam IGNITE Award instituted by the National Innovation Foundation (NIF) India for her invention. NIF is an autonomous body of the Department of Science and Technology under the central government.

She has been selected as a change maker. The baton relay is scheduled to conclude on July 28, 2022 at the Opening Ceremony of the 2022 Birmingham Commonwealth Games. It will travel across 72 Commonwealth nations and territories for 294 days. India is the 27th nation en route to Birmingham in the United Kingdom.

Maharaj was an icon of Indian classical dance. He was a recipient of the Padma Vibhushan, India’s second-highest civilian award.

Oil  Kathak legend Pandit Birju Maharaj passed away at his home in Delhi late on January 23 after suffering a heart attack. He was 83. Maharaj was an icon of Indian classical dance. He was a recipient of the Padma Vibhushan, India’s second-highest civilian award.

Maharaj was suffering from a kidney ailment and was undergoing dialysis and likely died of cardiac arrest. Ragini Maharaj, her granddaughter, said: “He was under treatment for the past month. He had sudden breathlessness at around 12:15-12:30 am last night; we brought him to the hospital within 10 minutes, but he passed away.”

Reports say that Birju Maharaj was playing with his grandsons late on Sunday night when his health deteriorated and he became unconscious. He was taken to hospital where he was declared dead.

He was born into a family of renowned Kathak dancers and trained under his uncles and father, Acchan Maharaj, before giving his first performance at age 7.

Poet and activist Maya Angelou, who died in 2014, has become the first Black woman to be featured on a United States quarter coin. The 25-cent coin, which shows Angelou with outstretched arms, went into circulation recently. Mint Deputy Director Ventris Gibson said: “It is my honour to present our nation’s first circulating coins dedicated to celebrating American women and their contributions to American history.”

In 2010, she was awarded the Presidential Medal  of  Freedom by former President Barack Obama

Angelou was born in Missouri in 1928 and became an essayist and poet who worked with Martin Luther King Jr and Malcolm X during the Civil Rights Movement. In 1969, she published her autobiography, I Know Why the Caged Bird Sings, and later read her poem On the Pulse of Morning at Bill Clinton’s inauguration in 1993.

In 2010, she was awarded the Presidential Medal of Freedom by former President Barack Obama.

Alia Bhatt is PETA India’s 2021 Person Of The Year

Reciprocating   Alia Bhatt’s work in support of an animal-friendly fashion industry and her advocacy for dogs and cats in need, People for the Ethical Treatment of Animals (PETA) India has named the actress it’s 2021 Person of the Year.

PETA India Director of Celebrity and Public Relations Sachin Bangera said: “Alia Bhatt is not only helping to advance vegan fashion but also encouraging the next generation to be kind to animals. Alia doesn’t hesitate to speak up, whether she’s rallying her fans to adopt a dog or cat or calling for action on crimes against animals.”

Tennis star Serena Williams and her 4-year-old daughter Olympia have proved stylish both on and off the court. Serena, former World No. 1 player, has always dabbled in style, and her line of clothing has a huge following.

Recently, Serena, 40, posted a picture on Instagram, with her daughter, both dressed in attire that Serena has designed. The picture of the mommy-daughter duo in sports her and her mini-me’s matching athletic gear, simply captioning the photo, “Next?”

Recently, Serena, 40, posted a picture on Instagram, with her daughter, both dressed in attire that Serena has designed

In the picture, both Williams and Olympia are sporting matching black and pink colour blocked Nike workout gear the same one the 23-time Grand Slam champion wore at the Australian Open in 2021 while sitting back to back on the tennis court, with their hands criss-crossed.