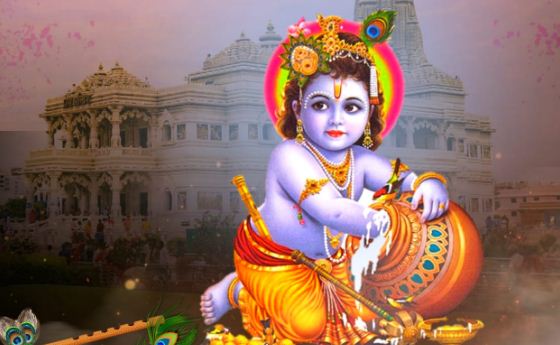 Krishna Janmashtami is a festival which is dedicated to Lord Krishna, the eighth incarnation or avatar of Lord Vishnu. Among all his previous avatars, Lord Krishna was the avatar where he showed various ‘Leela’ or miraculous deeds. Born as the eighth son of Devaki and Vasudev in Mathura, he spent his first few years in the home of Nand Baba and Yashoda in Gokul.

In Gokul, he, along with Radha, tried to spread the message about true love and affection. Lord Krishna established a complete city named as ‘Dwarka’ on the coasts of Gujarat and also helped the Pandavas to become victorious in Mahabharata against the Kauravas.

Krishna was born in an era of chaos, persecution was rampant, freedoms were denied, evil was everywhere, and when there was a threat to his life by his uncle King Kansa.

Immediately following the birth, his father Vasudeva took Krishna across Yamuna, to foster parents in Gokul, named Nanda and Yashoda. This legend is celebrated on Janmashtami by people keeping fast, singing devotional songs of love for Krishna, and keeping a vigil into the night. After Krishna’s midnight hour birth, statues of baby Krishna are washed and clothed, then placed in a cradle.