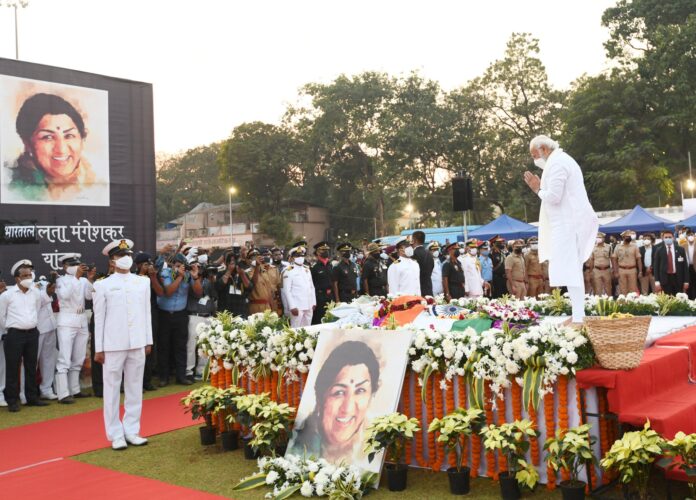 Legendary singer Lata Mangeshkar, who passed away on sunday at age 92, was on Sunday evening laid to rest with state honours. She passed away at Mumbai’s Breach Candy Hospital. The last rites were attended by several dignitaries including Prime Minister Narendra Modi and almost the entire film fraternity which remains indebted to her.

Lata, known as the ‘Nightingale of India,’ had sung in Hindi, Marathi, Bengali and other regional languages, a total of 25,000 recorded songs. She has been honoured with the Bharat Ratna, Padma Vibhushan, Padma Bhushan and Dadasaheb Phalke Award as well as several National and Filmfare Awards. Lata Mangeshkar’s last complete album was for 2004 Bollywood release Veer-Zaara.

The mortal remains of Lata Mangeshkar were taken from her Pedder Road residence Prabhu Kunj to Shivaji Park, where her last rites were performed. Prime Minister Narendra Modi also reached Mumbai on Sunday evening to pay his last respects to Lata Mangeshkar. He paid floral tribute and performed a parikrama of her mortal remains. The PM expressed his condolences to Lata Mangeshkar’s sister and singer Asha Bhosle, and the rest of her family.

Prominent among film personalities at the last rites ceremony were Shah Rukh Khan and others.