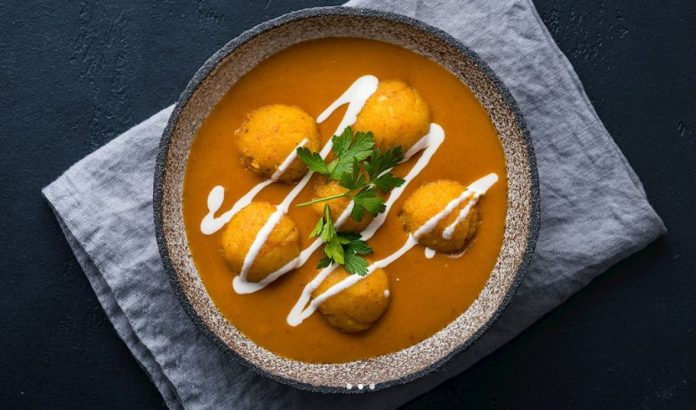 Malai Kofta is a highly rich, delicious, creamy savoury dish best served at parties and special occasions. Malai kofta is a north Indian specialty originated from the Mughlai cuisine. It is an authentic dish from the Mughlai recipes and popular in many restaurants around the world.

Malai kofta is the best vegetarian dish alternative to meatballs. It goes extremely well with naan or Jeera rice. Malai refers to the cream and the Kofta are deep fried mixed veggie dumplings mixed in a spicy onion, tomato and cream gravy that delights each and every bit of your taste buds.

There are two popular variations of Malai Kofta: The Mughlai version and the Punjabi version.

The Punjabi version:
Kofta are a favourite with Punjabis and kofta are made with nearly any vegetable. Potatoes are usually used for binding the kofta, which may be flavoured with a variety of Punjabi spices. The gravy in which the kofta are doused also vary. The Punjabi Malai Kofta is a specialty and savored by all connoisseurs of Punjabi food. Spicy and soft vegetable dumplings are put into a rich tomato gravy cooked in butter and topped with cream.

Mughalai version
It has mild, slightly sweet, aromatic white gravy. This dish has an elaborative process of cooking in two stages. First stage is to prepare the rich creamy gravy and the second stage is to prepare the kofta itself. Kofta was prepared using meat during the Persian and Mughal period, later it was adopted and the same process was used to fuse different vegetables. Most popular combination is aloo and paneer, both have a very soft texture which melts in the mouth like butter.

It’s aptly an authentic Mughlai delicacy. Mughlai food is characterized by rich and creamy curry which have a distinct aroma and taste of ground and whole spices. There are many versions of Kofta but most of them mistake it for the paneer (cottage cheese) stuffing but it’s actually the mixed vegetable with grated paneer that are made into koftas.

The dish is often prepared in a unique wok called a kadai, hence the other name of the dish, kadai kofta. Some food historians believe that these deep-fried dumplings have incorporated the influences of Turkish and Persian food cultures within them.

For the tomato purée with onion

HISTORY
The first appearance of recipes for kofta is in the earliest Arab cookbooks. The earliest recipes are for large ground lamb meatballs triple-glazed in a mixture of saffron and egg yolk.This glazing method spread to the West, where it is referred to as “gilding” or “endorsing”. Koftas moved to India; according to Alan Davidson nargisi kofta were served at the Mughal court.

Koftas are found from the Indian subcontinent through Central Asia, the Middle East, the Balkans, and northern Africa.Koftas are found in the traditional cuisines of Iran, Afghanistan,Albania, Bulgaria, Georgia,Armenia, Azerbaijan,Greece,india, Morocco, Pakistan,Romania,and Turkey.

In Turkey it is “a preferred offering at communal gatherings of all kinds”, according to Engin Akin. In Armenia and Azerbaijan it is, along with dolma, lavash, harissa, kebabs, and pahlava, a dish of “clearly symbolic ethnic significance” often argued over by gastro nationalists attempting to claim it as one of their own country’s traditional dishes that has been co-opted by the other country Kofta is a popular dish among Assyrian people.