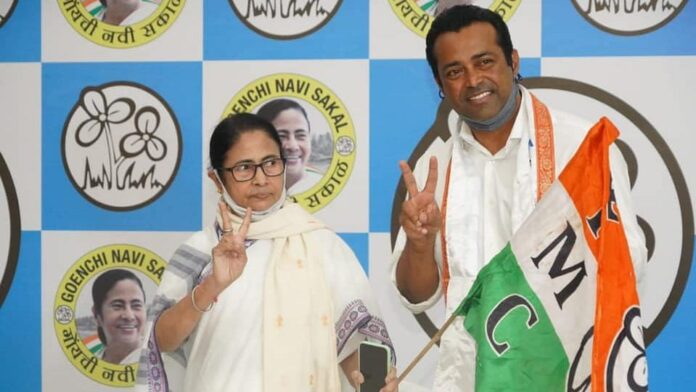 Is there any one-size-fits-all apparel that you can wear to be able to enter politics in any state? No, not in India. That was the problem with the BJP while campaigning in West Bengal during the recently concluded assembly polls in which the national party was soundly whipped by the local Trinamool Congress (TMC) of Mamata Banerjee. And this could have been lesson No. 1 for Mamata when she developed national ambitions. It is necessary to get local people involved, it is necessary to build a narrative that resonates with local desires, it is necessary to slowly build a consensus with known local faces.

Probably, in the incoherent haste of trying to transform All India Trinamool Congress (AITC) into a full-fledged national party, Mamata forgot this lesson. Goa, for starters, is not Bengal. It is probably not enough to have former CM and Congressman Luizinho Faleiro on her side. And the induction, in Goa, of former swimmer and actor Nafisa Ali and tennis star Leander Paes (neither born in that state) will definitely bear no fruit. Faleiro, it seems, has fallen out of people’s admiration ring, and the two stars never were. It is said that approaches made by Prashant Kishor’s I-PAC to singer Lucky Ali had met with a cold shoulder and when Remo Fernandes was targeted, it was found that he has Portuguese citizenship. These have created bad press.

On the other hand, West Bengal is reeling under a resurgence of Covid even as its economic landscape goes from bad to worse. If Mamata spends Bengal’s hard earned money on a land where she has little or no chance of forming a government – Congress, for all its lethargy, still has the best chance in Goa’s anti-incumbency atmosphere, and the Aam Admi Party is not far behind – she is bound to lose support back home. This will be a double disadvantage for Mamata, especially when she has been going around Goa, badmouthing the Congress. Maybe PK doesn’t like the Congress, but he should not make Mamata speak out against her own ‘parent’ party. That is not fair politics.

Goa isn’t like any other state – frankly, leaving out a few northern Indian states and Gujarat, no state in India is like any other and it certainly is not like Bengal. There is a great opportunity in Goa, as far as industry and tourism is concerned, but the basic question will be how and why would anybody in Goa vote for Mamata, when there has been no history associating the two? There has been a certain level of media hype, but the media doesn’t project or promote public opinion anymore.

Will Mamata’s profile help? Unlikely, because neither does she known the local dialect, nor is she aware of the small and large issues that plague the state today. Just because both (West Bengal and Goa) are coastal states, their opportunities and problems are unlikely to be the same. Moreover, while Mamata can surely showcase social development in Bengal, she has no clue vis-s-vis industrial and commercial development.

She has not been able to attract even one big ticket investment in Bengal in all these years, so how will her presence in Goa help? If the basic principle is of BJP bashing, well, then, it will be restricted to that. BJP might lose, but that is no guarantee of AITC gaining any substantial foothold in Goa. Moreover, this specialconcentration of focus on Goa might take much away from Mamata’s attempted foray into Tripura. With a large Bengali-speaking population and old links with Bengal, Mamata has a better chance there.

What are the similarities between Goa and Bengal? Both states had been primary political and geographical positions of two colonial powers, the British and the Portuguese. A lot of history had been created a lot of landmarks and similar, plus western practices. But that, today, is as ephemeral as a mirage. That might not be enough leverage for Mamata.

Goa isn’t like any other state – frankly, leaving out a few northern Indian states and Gujarat, no state in India is like any other and it certainly is not like Bengal.

What about the minority card? The total minority population in Goa is 32%. If that 25% are Christians and a little over 8% are Muslims. Does this make a difference? Numbers say that at the last elections, in almost 30% of the seats or in 11 assembly seats, the margin of victory was minimal, around 1,500 votes or even less. Also there have been 25% seats won by local parties or independents.

Does that give AITC a possible entry point, a toehold? These are critical questions, as are questions about what Mamata can deliver for Goa. A secular government is an attraction, but the Congress and the AAP have the same pitch. What about development? That is a question that begs details. Bengal does not have the financial muscle, or the business expertise at that level that it can export or share. Social development is something even Goans can deliver for themselves.

It will be a tough call. AITC will be spread too thin and since all decisions in the TMC are taken by one person – Mamata Banerjee – new thoughts may not be appreciated. For all practical purposes, ‘PK’ might lose his magic touch on the sands of Goa as well.