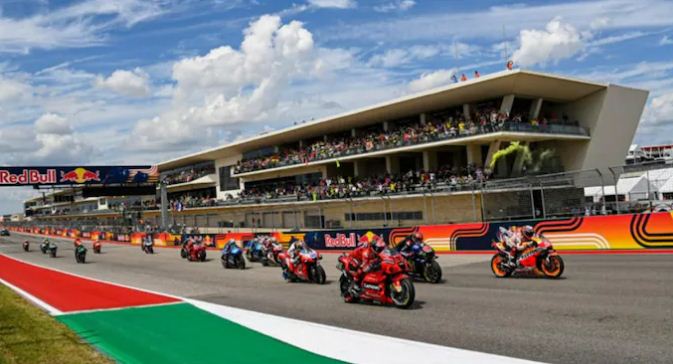 With the loss of Formula One, because of a strange no tax exemption order of the then Union ministry, the excellent Buddh International Circuit in Uttar Pradesh was finding it difficult to provide for maintenance and general upkeep. From 2023 a relief is sight, with the country poised to debut on the MotoGP calendar in 2023.

The races, to be known as the Grand Prix of Bharat, will not only bring back the spirit of motorsport to the country, but should also provide a great deal of financial impetus to the limping motorsport scenario of the country. This will also, as a bonus, help the huge motorcycle industry of the country to an extent.

There are more than 200 million motorcycles on its roads. Two-wheeled transportation counts for nearly 75% of the total number of vehicles used daily, making India one of the biggest motorcycle markets in the world. That, however, will not be a speaking point, because only a handful of motorcycles on Indian roads are race-worthy, and definitely not in the displacement class that will be visible at the MotoGP paddock and on the track.

What can be said, though, is that, while Indian roads discourage the use of powerful bikes, especially tourer (GT) and track racers, surfaces being of poor quality and traffic being what it is, there are millions of bike aficionados who dream of such bikes. Even lowly powered Royal Enfield 350s and The low category KTMs are seen to be big deals in India. Added to that is the low purchasing power of the client.

What could, therefore, drive this race is the unlimited enthusiasm of the bike lovers and the huge ambitions of Indian bike makers, such as Royal Enfield (not set to be in the race class), Bajaj-KTM and TVS-Norton. These are bikes way below  the Ducati, Yamaha, Suzuki ranges, but Austrian firm KTM is gaining ground somewhat. Who knows what the future will be.

The fan base is large. That is one reason MotoGP has decided to expand into this market. The Indian Grand Prix could be an important milestone in the sport’s mission to open the doors of motorcycle racing to all.

For India, the event is set to bring about an increase in GDP, with the government estimating employment generation for 30,000 to 50,000 people.

Yogi Adityanath, Chief Minister of Uttar Pradesh said: “It’s a matter of great pride for Uttar Pradesh to host such a global event. Our government will provide full support to MotoGP Bharat.”

Anurag Thakur, Union sports minister, said: “It’s a historical day for the sporting industry and a tribute to the 75th year of India’s celebration.”

Nand Gopal “Nandi”, cabinet minister, government of Uttar Pradesh said: “This event will provide a major impetus to the economy by generating an influx of foreign investment in the state.”

Pushkar Nath Srivastava, COO, Fairstreet Sports said: “We are thrilled to get MotoGP into India and host this prestigious race. It’s a matter of pride that we are bringing this event on Azadi ka Amrit Mahotsav.”

Dorna Sports CEO Carmelo Ezpeleta met with CM Yogi and industries minister Nand Gopal Gupta ‘Nandi’ before the news was announced to the world. The CM promised that all possible assistance would be provided and has directed officials to get an update on the status of the venue, which has previously hosted Formula 1, and inform his office as soon as possible.

Said Ezpeleta: “We’re very proud to announce that the Buddh International Circuit will be on the 2023 calendar. We have a lot of fans in India and we’re excited to be able to bring the sport to them. India is also a key market for the motorcycle industry and therefore, by extension, for MotoGP as the pinnacle of the two-wheeled world. We very much look forward to racing at Buddh International Circuit and can’t wait to welcome the fans through the gates to see this incredible sport in person.”

Nandi said MotoGP would give India new recognition in the world, remarking, “The law and order in the state has become an example for the world. Our government has managed to win the confidence of investors both in India and abroad. An event like MotoGP will give UP a chance to expand its economic and tourism potential.”

Sponsorship
Dorna Sports has signed an agreement with Fairstreet Sports to promote the event, one of two brand-new Grands Prix which will be added to the calendar next year. Also making its debut will be the Kazakhstan Grand Prix, in what will be a record-breaking season of racing with a focus on sustainability and spreading the exhilaration of MotoGP around the world.

The qualifiers
A new split qualifying procedure was introduced in 2013, with the fastest riders from practice going into a pole shoot-out. The existing three 45-minute practice sessions remained, but the first half hour of qualifying became additional practice and does not count for the grid. Qualifying itself becomes two 15-minute sessions known as ‘qualifying practice 1’ and ‘qualifying practice 2’. QP1 commences 10 minutes after the end of the new practice four, with a further 10-minute break before QP2.

The 10 fastest riders in the combined times from practices one, two and three go straight through to QP2. The rest of the field have to participate in QP1, from which the fastest two riders qualify for QP2, with the remainder forming the grid from 13th back. QP2 then decides the top 12 grid positions.

Italian riders, including Yamaha legends Valentino Rossi and Giacomo Agostini, have the best all-time records, winning a total of 20 titles in this premier class. Yamaha has a total of 16 titles, including ten in the GP500 and five in the MotoGP. Yamaha Factory Racing won the Triple Crown of Rider, Team and Manufacturer’s title three years consecutively, 2008 – 2010 and the Rider’s title again in 2012 and 2015.

What is MotoGP
The MotoGP Championship is the pinnacle class of world championship road racing. It developed primarily in Europe after the FIM (Federation Internationale de Motocyclisme) consolidated the regulations for motorcycle competition for the first time in 1949. In the past, the premier class was the 500cc class of the Road Race World Championships, but in 2002 the regulation was changed to create the MotoGP class in which 2-stroke machines of up to 500 cc and 4-stroke machines of up to 990 cc competed together.

The regulation was changed again in 2004 to limit the MotoGP class to four-stroke machines only, and the displacement limit was reduced to 800 cc in the regulation from the 2007 season. Since then, new regulations have also made a single maker the sole supplier of tyres for MotoGP, limited the number of tyres that can be used by a team during race week and reduced the number of test days.

In 2010, regulations changed to limit the number of engines a single rider can use during the season to six. 2011 was the last for the 800cc machines, with regulations changing for 2012 to allow 1000cc bikes onto the grid.

A major change for the 2014 season was that all teams were required to source and use a standard MotoGP ECU. In 2015 it was decided that all engine management systems including injectors, bypass systems, variable intake systems and ignition must be operated exclusively by the original and unmodified ECU signal.

Other 2015 regulation changes see the minimum weight of a 1,000 cc machine will be reduced by 2 kg from 160kg to 158kg and the carbon brake discs must be one of the permitted sizes for outside diameter, that is: 320mm and 340mm. At certain circuits, such as Motegi, the use of 340mm carbon brake discs is mandatory for the race for safety reasons.

MotoGP rules dictate four-cylinder engines with a maximum bore size of 81mm. Each rider is allocated seven engines for the season, with no development work permitted during the season.

With all these changes, MotoGP is firmly in a new era. The machines achieve a maximum output of over 240 hp and reach speeds of over 340km/hr. The latest electronic control technology is employed throughout. Races are contested on tarmac circuits that are typically between 4-5km long, with a total race distance of between 110-120km taking around 40 minutes to complete.