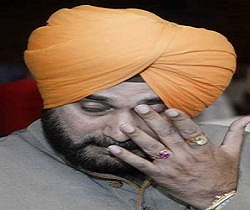 Finally, Navjot Singh Sidhu, the mercurial cricketer-turned politician, could not evade the long arm of the law. On Thursday (May 19) the Supreme Court, having heard a review petition (by the victim’s family) on its earlier order, enhanced the sentence of Sidhu to one-year rigorous imprisonment in the 1988 road rage case in which a man had died.

The order was delivered by a bench of Justice AM Khanwilkar and Justice Sanjay Kishan Kaul. Earlier, the court had reserved the order on an application seeking to enlarge scope of notice in a road rage case against Navjot Singh Sidhu.

The famous cricketer turned politician Navjot Sidhu had to surrender before a court.

Sidhu had opposed the plea and said that there was no evidence that the death of the victim was caused by a single blow in the road rage case. Sidhu, while responding to the application had said that application was devoid of any merits and ought to be dismissed.

The incident occurred on December 27, 1988, at a traffic intersection in Patiala, when Navjot Singh Sidhu pulled the man from his vehicle and assaulted him with fist blows over a disagreement about vehicle driving.

In that judgement, Justice Chelameswar had stated: “The material on record leads us to the only possible conclusion that we can reach that the first accused voluntarily caused hurt to Gurnam Singh punishable under Section 323 IPC.”

This was a case that had come up from the Punjab and Haryana High Court which, in 2006, had found him guilty of violating Section 304-II of the Indian Penal Code and sentenced him to three years in prison.