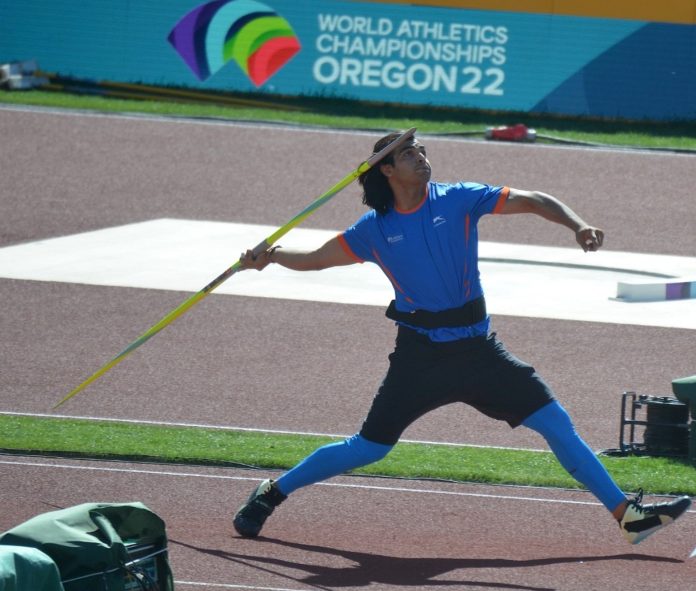 India’s Olympic champion javelin thrower Neeraj Chopra did not disappoint his fans back home, when he threw the spear to a distance of 88.13m (his best try) at the World Athletics Championships in Oregon, USA on July 23. This effort gave him a silver to add to the Olympic gold he already has.

In Oregon Neeraj lost the gold to a deserving winner, Grenada’s Anderson Peters, who whipped the competition with a gold medal throw of 90.54m. This was only one of his three 90m throws in the championship. Peters threw 90.21m in his first attempt and then bettered it in his second at 90.46m.

Neeraj made history with his silver, becoming only the second Indian to win a medal at the world athletics championships. The last winner was long jump Anju Bobby George, who had won bronze at the Paris worlds in 2003.

Neeraj registered his gold on his fourth attempt. He started with a foul throw and then registered 82.39m with his second attempt. He improved with his third attempt, when he threw the javelin 86.37m. He made two fouls in his first attempt and the fifth attempt, but just one good throw was enough to get his name in the record books.

He was still not set for a medal, but he registered a throw of 88.13m with his fourth attempt to shoot up to second place from fourth. His fifth and sixth attempts were foul throws.

The 24-year-old Neeraj had topped the Group A qualification round and qualified for the final at second place behind Peters by sending his spear to 88.39m for his third career-best throw. Peters had topped Group B with an effort of 89.91m.

The other Indian in the fray, Rohit Yadav, finished at 10th with a best throw of 78.72m. Rohit had finished 11th overall in the qualification round with a best throw of 80.42m. The 21-year-old Indian had recorded a season’s and personal best of 82.54m while winning a silver medal at the National Inter-State Championships last month.

A whole set of medals
Neeraj Chopra now has completed the set of major medals. The 24-year-old, who failed to qualify for the final in 2017 World Athletics Championships and missed out in 2019 due to an injury, won his maiden medal at the world meet.

Chopra had won Indian athletics’ maiden gold (87.58m throw) in the Tokyo Olympics last year. He is only the second Indian to have won an individual gold in the Olympics, after shooter Abhinav Bindra, who clinched the yellow metal in 2008 Beijing Games.

In 2015, Chopra broke the previous world record in the junior category, throwing 81.04 m in the 2015 All India Inter-University Athletics meet; this was his first throw of over 80 m.

At the 2016 South Asian Games, Chopra achieved a new personal best during the athletics finals in Guwahati on February 9, winning gold with a throw of 82.23 m, though falling short of the 83 m Olympic qualifying mark.

Chopra won gold in the 2017 Asian Athletics Championships with a throw of 85.23 m.

In May 2018, he again broke the national record at the Doha Diamond League with a throw of 87.43 m. On August 27, he threw a distance of 88.06 m to win gold in the men’s javelin throw at the 2018 Asian Games and bettered his own Indian national record.