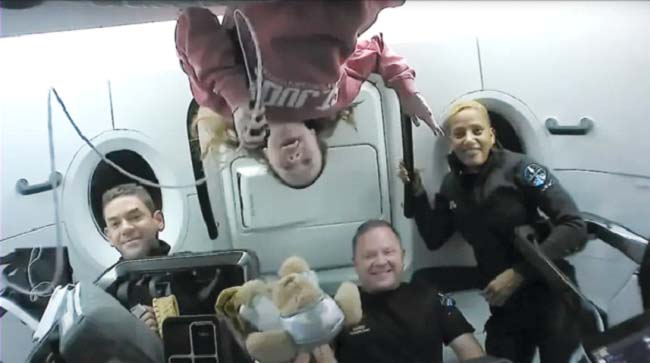 The world’s first-ever private/civilian airspace mission Inspiration4, initiated by SpaceX Founder Elon Musk, has been a success. As the Dragon capsule safely splashed down in the Atlantic near Florida’s coast, following three days in space and following a safely return to Earth orbit, Musk is already looking at adding more spice to his missions of the future.
Creating history – whether it be with mass-produced top of the line electric cars, or the world largest Gigafactory for batteries, or now in space travel and exploration – is par for the court for Musk. Having created history with one of its most ambitious projects scientifically, Inspiration4 also achieved its goal of raising $200 million for St. Jude Children’s Research Hospital. This is a double bonus for Musk, who has often been criticized as being over ambitious and there have been efforts in the past of investors trying to take the company away from him.
And now Musk says that he will top his earlier effort of having sent a pizza and Wi-Fi to its astronauts. As the crew of Inspiration4 had the pizza it was cold. That was not good enough for Musk. Musk apologised and promised that the next Dragon capsule will offer warm food along with free Wi-Fi. “Sorry it was cold! Dragon will have a food warmer & free Wi-Fi next time,” Musk had said.
This is getting interesting and closer to space travel sci-fi movies. We might see one in our lifetimes, if Musk keeps adding special attractions in his future flights.
The Inspiration4 crew, well fed, returned safely. It is being rumoured that they even interacted with Hollywood actor Tom Cruise and shared their space experience over a call while orbiting around the Earth. Now Cruise is planning a movie in space, though it won’t be the only one to be shot on the International Space Station, as the Russian space agency has announced that they aim to launch two missions by the end of this year.
Pizza, one understands. But how will Musk take Wi-Fi to space? He will be using Starlink to provide internet connectivity. “We’d use our Ka parabolics or laser links for Dragon, Starship or other spacecraft as soon as they got above cloud level,” Musk tweeted.
Now, more about the space cuisine offered by Musk. It wasn’t just pizza served inside the Dragon capsule. For the crew there were pizza bagels, sandwich, veggie platter, Mediterranean lamb, pasta, meatballs, roasted edamame, salami, bacon and cheddar pasta bolognese, tortillas, beef and turkey jerky. To wash all that down were tea and coffee. Plus a range of snack items including M&M, pastries, granola bars and olives.
This is space in style, Elon Must style.