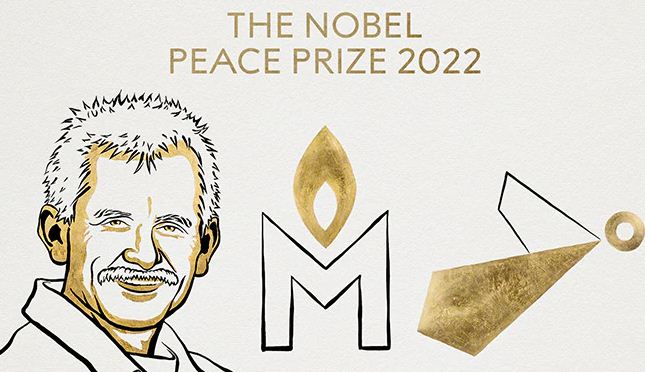 The Norwegian Nobel Committee has decided to award the Nobel Peace Prize for 2022 to one individual and two organisations.

Ales Bialiatski was one of the initiators of the democracy movement that emerged in Belarus in the mid-1980s. He has devoted his life to promoting democracy and peaceful development in his home country. Among other things, he founded the organisation Viasna (Spring) in 1996 in response to the controversial constitutional amendments that gave the president dictatorial powers and that triggered widespread demonstrations. Viasna provided support for the jailed demonstrators and their families. In the years that followed, Viasna evolved into a broad-based human rights organisation that documented and protested against the authorities’ use of torture against political prisoners.

The human rights organisation Memorial was established in 1987 by human rights activists in the former Soviet Union who wanted to ensure that the victims of the communist regime’s oppression would never be forgotten. Nobel Peace Prize laureate Andrei Sakharov and human rights advocate Svetlana Gannushkina were among the founders. Memorial is based on the notion that confronting past crimes is essential in preventing new ones.

The Center for Civil Liberties was founded in Kyiv in 2007 for the purpose of advancing human rights and democracy in Ukraine. The center has taken a stand to strengthen Ukrainian civil society and pressure the authorities to make Ukraine a full-fledged democracy. To develop Ukraine into a state governed by rule of law, Center for Civil Liberties has actively advocated that Ukraine become affiliated with the International Criminal Court.