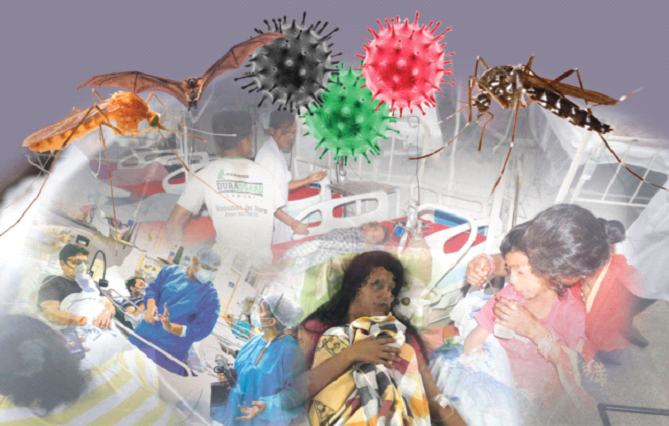 At Even as Coronavirus seemed on recess, other infections have sprouted across the country. And even with a large number of the population vaccinated – many even double vaccinated – the danger of contacting a disease or two remains strong. Over and above, the recess of Covid-19 seems to be over and the third wave, though not officially declared, seems slowly creeping in.

We try to understand the different threats that India face today and what options we have. One has to understand that, for any infectious disease, it will be essential that standard hygiene protocols are maintained, such as wearing masks, extensive use of alcohol-based sanitizers and washing your hands regularly. This is apart from the social distancing.

However, other diseases on the prowl, such as dengue and the Nipah virus and even the resurging avian flu (plus the usual malaria infections) will require even more rigorous control and prevention and this has to be dealt with on a war footing by the government and all allied bodies. Preventive measures, such as the use of mosquito nets, cleaning of stagnant water etc. will have to be undertaken, these being mainly insect borne and aerosol borne diseases.

Re-infection is of primary concern as no permanent cure has been found. Re-infections in Kerala seem to be leading the race on September 5 with 26,501 new cases, as per the Ministry of Health and Family Welfare.

Overall, new cases in India seems to have hit a plateau around the 30-40,000 mark, but even with the incredible pace of vaccination – more than 1 crore vaccines were administered on September 6 alone, taking the total tally of vaccination to 69.68 crore (69,68,96,328) – some states have seen a return of Covid, such as Kerala, after the huge Onam celebrations. A resurgence has been seen in Maharashtra as well, though physical ‘darshan’ during Ganesh chaturthi has been banned and the pujas having gone online.

However, there is a bigger problem waiting in the wings. This is the advent of three other infectious diseases.  They are the Avian flu – which has already passed onto humans in Haryana – the deadly Nipah virus (in which one child has already dies in Kerala) and even the dengue fever which has, traditionally, claimed many lives.
It is time that the health ministry gears up for another distressing season of diseases.

WHO reports that the Nipah virus was first reported on May 19, 2018 from the Kozhikode and Mallapuram districts with 17 deaths out of the 18 cases as of June 1, 2018. It also stated that a multi-disciplinary team led by the Indian government’s National Centre for Disease Control (NCDC) were sent to Kerala in response to the outbreak. WHO provided the technical support to the Government of India team.

The earlier outbreaks in India were in 2001 and 2007, both in West Bengal. A total of 23 cases were identified, including the index case with 18 laboratory-confirmed cases. These outbreaks were managed by the state government and central government and were acknowledged as success stories. The Indian Council of Medical Research (ICMR)-National Institute of Virology conducted a cross-sectional survey to study Nipah Virus (NiV) and its prevalence in the bat population in India. Samples of some species of bats found in a cave in Maharashtra’s Mahabaleshwar in which antibodies against NiV, and all were passed onto WHO in order to aid combat against the virus.

Meanwhile, the boy infected with the Nipah Virus  in Kerala’s Kohzikode was confirmed by the by the National Institute of Virology (NIV) in Pune late on September 4 after tests on the boy’s plasma, serum, and cerebrospinal fluid (CSF) returned positive.

The state health department has sounded an alert for the adjacent districts of Malappuram and Kannur. All districts have been directed to maintain vigil and ensure surveillance for acute encephalitis, which is one of the symptoms of infection with the Nipah virus. The state government has also declared a containment zone with a radius of 3 km around Chathamangalam village where the infection occurred. This also underscores the need to be extra vigilant during the Nipah season.

Dengue
Dengue is the most rapidly spreading vector-borne viral disease globally, with an increasing number of areas at risk. A study of expatriates living in Delhi had a very high incidence of dengue, unmasking substantial dengue transmission that was not reported as such in the local population. A Lancet study estimated that the number of dengue infections among individuals between 5 and 45 years from 30 Indian states in 2017 was 12,991,357 based on constant force of infection models (one type of modelling used in studies).

Given the size of and vast geographical differences within India, it is not unsurprising that seroprevalence (or the pathogen presence in the blood) in India is occurring at a dazzling rate, and hence India is poised to see further upsurges of dengue.

The fact and the figures point to a situation that could easily get out of control. The second wave disaster has yet to be wiped from memory. The thousands of deaths and the overflowing burning ghats are fresh in memory. Nobody wants to be caught in that pathetic situation any more. While the Covid vaccination rate has grown appreciably, the preventive measure for diseases such as dengue have never met expectations in this country. Mosquitoes have not been brought under control and drains have not been cleared. The incidence of quick and intense rains during this fickle monsoon season has spread the danger far and wide. Today it is the fear of a cocktail of five deadly diseases which clearly states that the country is yet to get out of the woods.

RAJASTHAN
Rajasthan also saw a rise in vector-borne diseases, though the graph is still low. Such diseases, including dengue, malaria and chikungunya were up. “…till September 2020, there were 717 dengue cases which are 1,022 so far (same period). No deaths but a health officer said that there is need to stay alert.

MAHARASHTRA
Another report says that in August, Mumbai reported 132 cases of dengue with many hospitalisations. This is as per data collected by the Brihanmumbai Municipal Corporation (BMC). The report was on monsoon-related diseases. This has triggered fear, having come on the heels of the dangers of the Covid
pandemic.

The BMC data also revealed that the number of malaria cases too has gone up in August from July, marginally.
Maximum dengue cases have been reported from FS, B and the HW ward which spans over areas like Bandra, Khar, Santacruz, Parel etc.

Every year, around 5,500 dengue and malaria cases are recorded in Mumbai, the highest being reported between June and August. Last year’s lockdown brought down the number of mosquito-borne diseases as construction activities were halted.

UTTAR PRADESH
In Uttar Pradesh, a mystery fever has killed over 100, including a large number of children, following which the Indian Council of Medical Research is investigating the mystery disease.

Mysterious fever in Koh
Koh is a small village in the Mathura district. The village is near RSS founding member Pandit Deen Dayal Upadhayay’s home village Chandrabhan. Even tough the area has seen a good amount of development, with good roads and a government hospital just 4km from the village (in Farah town), the village people barely referred the incidence of the disease to the hospital, till it was very late. The hospital, however, is poorly staffed and has a reputation of inefficiency which has prompted the villagers to not trust government facilities.

Young men from Koh work in factories in Mathura, an hour away and the women tend to the cows and the fields. There are roughly 350 households, with a total population of 2,126 as per state department figures. Nine children died here and 132 people were infected. So far, as per official estimates, 100 people died across the state through dengue. A central team later classified a majority of the deaths as being from dengue, with the others from scrub typhus and leptospirosis. While Koh is among the worst-affected, but it quickly spread across the region.

According to one official data, among those reported are 177 cases of dengue, 16 cases of malaria, 29 cases of scrub typhus, 45 cases of leptospirosis, and 2 cases of Japanese Encephalitis since August 21.The scare is such that 40 families fled the village due to fear of the fever.

Firozabad
In Firozabad district (less than 100km from Mathura) has seen 105 fresh cases bringing the total to 300. Confirmed death toll due to dengue rose to 51 in just one month according to Chief Medical Officer Dinesh Kumar. There has been a health department team visiting the area providing help and advice.This apart, there has been sharp rise in viral cases of dengue and malaria in Bareilly, Badaun, Moradabad and Pilibhit districts of the Rohilkhand region of Uttar Pradesh, according to official figures.

Badaun
In Badaun (150-off km from Mathura) chief medical superintendent (of the district hospital) estimated Vijay Bahadur Raj has been quoted as saying: “We receive 1,100 to 1,400 out patients every day and most of these patients complain of symptoms resembling viral fever. So far we have around 50 confirmed cases of malaria in the Badaun but no case of dengue so far.”

Bareilly
Here, as per Dr Subodh Sharma, “A 10-year- old child who had very low platelets count was brought to hospital. The child succumbed within hours of admission. He had dengue-like symptoms and we have sent his blood samples for confirmation.”

Moradabad
400 new patients showing symptoms of viral fever were reported here and either dengue or malaria has been confirmed.

Pilibhit
Here, patients with viral fever-like symptoms was 500. Dengue has been confirmed in a 12-year-old boy.

Prayagraj
Even in Prayagraj, 170 children were admitted to Motilal Nehru Hospital with viral fever and many of these patients required oxygen support. Cases of viral fever have also been reported from Varanasi and Basti The government health department officials have said that the spike in cases  of viral fever is a norm post-monsoon, asserting that the situation is under control.