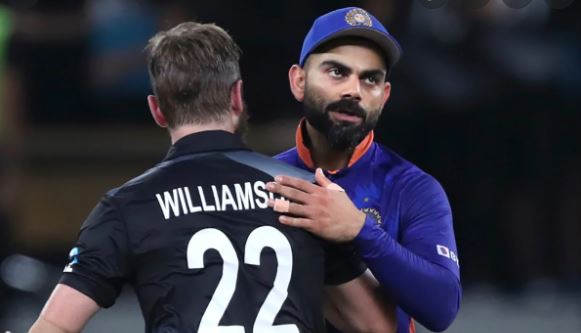 India suffered their second massive shock in the T20 World Cup when they thrashed by eight wickets by New Zealand at the Dubai International Stadium on Sunday. This has put Virat Kohli’s India in a very deep hole, with a very thin chance of staying in the championship.

In their first match of the Cup, India had been hammered by Pakistan by 10 wickets, the first victory for Pakistan over India in any World Cup.

In the Group 2 match, New Zealand, elected to field first. India managed only 110 for seven in their 20 overs, the highest scores coming from Ravindra Jadeja (unbeaten on 26 off 19 deliveries) and Hardik Pandya (23 off 24 deliveries).

New Zealand totted up the 111 for the loss of two wickets in just 14.3 overs, Martin Guptil scoring 20 and Daryl Mitchell contributing a hefty 49 and Kane Williamson remaining unbeaten on 33. Only Jasprit Bumrah (2/19) managed to take wickets for India.

Ish Sodhi was declared Player of the Match.
India are now placed in a piquant position, where India not only have to win their remaining matches with large margins, but will also have to wait for the result of other matches.

Padding up for the polls