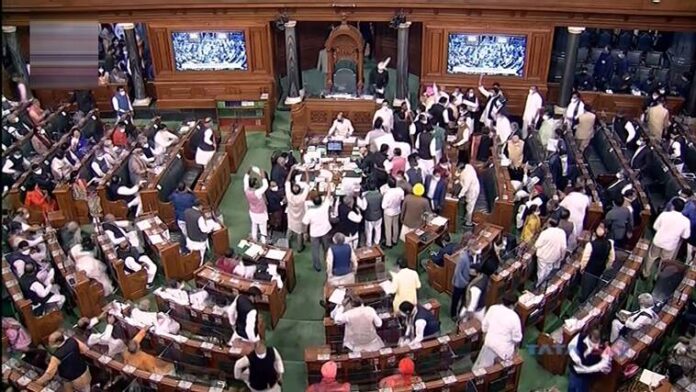 The mahagathbandhan (grand alliance) theory is gaining ground again. Mostly, such hodgepodge political alliances never work in India, unless one of the partners is way stronger than the rest. That was how the Left Front, led by the CPI(M), survived for so long, and that is how the NDA under BJP’s leadership, has existed. Now, with just months to go for assembly elections in seven states (many in February itself) overall, talks for several such alliances are in the air and, then, there are some, such as the Trinamool Congress (TMC), who are moving into new territory with reasonable success. The final objective of all, however, is to unseat the Bharatiya Janata Party (BJP).

Just now the Samajwadi Party (SP) is leading the creation of another such mahagathbandhan, bringing in pretty disparate parties and ideologies, such as the Aam Admi Party (AAP), the Rashtriya Lok Dal (RLD) and the Apna Dal (K), whose chief is Krishna Patel. There have even been reported talks with Aasduddin Owaisi’s All India Majlis-e-Ittehadul Muslimeen (AIMIM), but it is clear that there must be several rounds of parleys to come to a conclusion, if at all.

The overall target is to unseat the Yogi Adityanath led BJP (NDA) dispensation now in power in Uttar Pradesh, and the immediate adrenaline rush was Prime Minister Narendra Modi’s public ‘apology’ and promise that the government will repeal the three farm laws during the Winter Session of Parliament.

Later, the Farm Laws Repeal Bill, 2021 cleared both Houses via voice votes without any discussion. The treasury benches rejected demands of the Opposition, which was keen to target the government over the delay in withdrawal of the laws given that farmer protests began more than a year ago and some demands, including legal guarantee for MSP, are still being raised.

The bill was introduced in Lok Sabha on November 29 by the Minister of Agriculture and Farmers’ Welfare, Narendra Singh Tomar, who also tabled the bill in Rajya Sabha soon after resumption after the temporary adjournment.

While this is generally being considered a ‘defeat’ for Modi, the BJP is actually turning it around to show the PM’s magnanimity. That is the narrative – apart from the price rise, the high price of fuel, the anti-Muslim acts and other issues that drives this mahagathbandhan.

This is how the mix is being generated. As SP chief Akhilesh Yadav met AAP’s Sanjay Singh (AAP’s UP in-charge), they agreed to “work together to oust BJP” in the 2022 elections. Where were the two speaking from? It is being said that Yadav is almost under the impression – and possibly wrongly so – that the BJP’s time in UP is over. He has talked about projected numbers that sound unreal, and over and above that, he had just finished a talk and sealed a sort of ‘alliance’ with the Rashtriya Lok Dal (RLD). So when Yadav was speaking to AAP, he was under the impression that he was already speaking from a position of power. How that poise will hit off with the crafty Arvind Kejriwal will have to seen, but the public statement available so far was that the two parties have agreed on principle that the BJP was the main enemy. Well, didn’t we know that already? There is yet to any finalization on an “alliance”.

There was footnote of a “common agenda”, which talked about ensuring UP’s development. “A strategic discussion was held on the common agenda to make UP corruption-free and get rid of the government under which the law and order collapsed,” Singh said after the meeting. No talk about any alliance.

The point is that this attitude of the SP might not work with the AIMIM and Owaisi. In a televised comment, Owaisi has admitted that his party is willing to come down from its demand of 100 seats in a sharing alliance, but when it was the turn of the SP to comment on this, spokesperson Sunil Singh Sajan said the door is closed for Owaisi. “There is no hope for alliance with him,” he had said. However, Om Prakash Rajbhar, president of the Suheldev Bharatiya Samaj Party, already in alliance with the SP, has said there is still hope only if Owaisi is willing to agree to 5-10 seats. This extreme haggling might either actually have Owaisi agreeing to a mid-ground, or even have Owaisi having tactical alliance with the BJP instead. It was seen prior to the West Bengal elections that Owaisi had made unnatural demands, which Mamata Banerjee had rejected. Owaisi, technically has little ideological inclination and goes more for the numbers.

Uttar Pradesh BJP spokesperson Chandra Mohan has pooh-poohed these talks, saying:  “The opposition is jittery over the BJP’s popularity. So it is making efforts to align with the people instead of parties in the polls. It has seen the fate of such in 2019 polls. The people of the state are with chief minister Yogi Adityanath to build a new Uttar Pradesh.”

On the alliance with Apna Dal (K), Patel has said: “We had a discussion with Akhilesh ji and our alliance has been finalised. We are allying with parties of the same ideology and we will soon be sharing the dais.” She has said that there was a possibility that Apna Dal may contest on 20-25 of the state’s 403 seats.

The Apna Dal (Sonelal) led by Krishna Patel’s daughter Anupriya Patel is already an ally of the ruling BJP.

Earlier, Owaisi had put out a very carefully calibrated comment. He had said: “Our party has decided to contest elections on 100 seats. We are in talks with 1-2 more parties and time will tell if we form an alliance or not.” Later, though, on television, he has accepted that the climb-down from the 100-seat position was possible.

The Meghalaya jolt for Congress
Meanwhile in Meghalaya, 12 of the Congress’ 17 MLAs defected to the TMC. The defectors included former chief minister Mukul Sangma. Sangma, of course, was already marked for defection, but that he was able to take 11 more with him is surprising. What this means that Congress, which once had a good stake in the state, has been reduced to a minor party, while the TMC, which had no presence in the state, suddenly becomes the largest opposition party. The house has 60 members and is ruled by the Meghalaya Democratic Alliance, which is led by the National People’s Party and has BJP as a minor partner.

Sangma’s unhappiness with the Congress is well known, having been sidelined during appointment of Pala to a party post in August and had started skipping Congress events in Meghalaya. Mamata, on the other hand, has now made it amply clear that her party will have no truck with the Congress, Mamata’s parent party. Mamata was in Delhi recently, to meet the PM and she did not even seek an appointment for a meeting with Congress interim president Sonia Gandhi. It seems that even the public pose of a “Hi” or a “Hello” has been thrown out of the window. Congress is not gaining from this.

Also working in TMC’s favour were people moving into the Didi fold. Pavan Varma, an erudite and astute commentator and spokesperson, who had so far been the best rebut expert for the non-Godi media has joined the TMC. The St Stephen’s educated Varma carries with him years of top level experience. He is a former Indian Foreign Service officer and was an adviser to the Chief Minister of Bihar, Nitish Kumar, with cabinet rank. With effect from June 2014, he was a Member of Parliament until July 2016. He was the National General Secretary and National Spokesman of the Janata Dal.

Another rumour that has been doing the rounds is about BJP’s internal critic Subramanian Swamy, who met Mamata during her Delhi visit. This is a daring move by Swamy, who has been a disgruntled member of the BJP for long and has been openly criticising Modi’s policies for a while. He has also been praising several of Mamata’s policies, and has recently commented that Mamata is also a true Hindu, because she is a follower of “Ma Durga”.

Whatever the justification – Swamy has said that during their meeting they discussed the political situation of West Bengal – there is a big risk in letting Swamy in. If Swamy does not get his pound of flesh – which would even end up being several pounds – he could well start criticising Mamata. This is a step Mamata has to carefully take.

Mamata’s setback
Not those things are all hunky dory for Mamata either. Tripura, with a large Bengali-speaking population, seems to have rejected the TMC en masse. In the recent municipal elections of Agartala, BJP earned a landslide victory, winning 329 of the 334 seats.

At the Agartala Municipal Corporation (AMC), which has 51 wards, 13 municipal bodies and six nagar panchayats, the BJP had fielded candidates for all the 334 seats. In 112 places the party’s nominees won uncontested.

In Meghalaya 12 of the Congress’ 17 MLAs defected to the TMC, making the TMC the largest opposition party in the 60-member assembly. At the same time, Tripura completely rejected the TMC at the municipal elections, with the BJP winning in a landslide.

Of course, there have been allegations of vote rigging by the TMC and the communists, but the general perception is that, despite the language parity, TMC may have failed to impress people in the development front. The TMC has nothing to show for development, when its only showcase state is West Bengal. In a recent study, Kolkata has been ranked the worst city as far as job seekers are concerned.

This is one angle Mamata must take note if she has to impress other states. Simply the language parity and an anti-BJP campaign will not make people bend towards Mamata’s party, especially times where the economy sees no signs of recovery. Overall, this is the season for alliances and new forays, again, of ambitions growing beyond home territories.