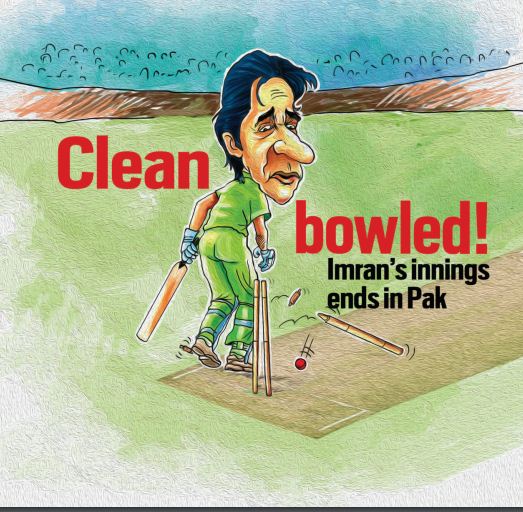 He thought he had offered a straight bat, but the opposition had sent down a yorker, and Imran Khan, Pakistan’s greatest cricket captain and Prime Minister, completely missed the length and line of the delivery and was clean bowled in the last over, as Saturday’s (April 9) parliament session neared midnight. In all 174 members in the 342-strong House – the National Assembly – voted in favour of the resolution to oust him. There were even defectors from Imran’s party Pakistan Tehreek-i-Insaf (PTI) who voted against Imran.

The 69-year-old Imran had said he would fight till the “last ball”, but the match is over and even though PTI took out rallies in several cities of the country on Sunday to protest the ouster of the party chairman, Imran did end up becoming the first Prime Minister of the country to be removed through a no trust vote. However, he kept to the Pakistani tradition, in which no Prime Minister has ever completed a full five-year term.

As Shehbaz Sharif, brother of former PM Nawaz Sharif, took over the Premiership, another political heir, Bilawal Bhutto, is expected to take over as foreign minister when the cabinet is chosen.

That is the state of Pakistan, and it will take a little time for the country to settle down to another corruption-riddled administration. Comments about Shehbaz being more pro-India than Imran was are doing the rounds, but his first comment about a settlement of the Kashmir issue means he seems less inclined to find a decent negotiating point. Pakistan, with its economy already tottering on the brink and its politics in tatters, is unlikely to come out of a complete decadent state of affairs in a hurry.

Hence, it would be premature to comment on the India-Pakistan relationship at this point. Shehbaz, current President of the Pakistan Muslim League-N, has been chief minister of Punjab three times in his political career. However, he has never been prominent in national politics. How he handles Pakistan’s complex national and international issues is to be seen.

More interestingly, if Bilawal Bhutto Zardari, current chairman of the Pakistan Peoples Party and son of former Prime Minister Benazir Bhutto and former President of Pakistan Asif Ali Zardari, becomes foreign minister, then there will be a problem of brawn over brain. If anything, Bilawal has not been known to be smart, and he has on an earlier occasion, claimed that Imran had been bankrolled by India. Also, his comments about Kashmir are as radical as they are immature. So immature in fact, that his MA from Oxford should come under scrutiny.

So India cannot be happy that it is Nawaz Sharif’s brother who is coming into power in Pakistan. Nawaz Sharif, as we all know, had developed a good relation with Prime Minister Narendra Modi and this might continue, if other variables remain unmoved.

As for Imran, he will remain that spanner, always aiming the workings of the government. That will mean that any negotiating point reached through diplomacy may be destroyed. Also Bilawal may not be stable enough a person to lead the foreign policy of a nation as embattled as Pakistan. Maybe Pakistan now needs good foreign policy and a better minister for that post more than ever. Imran’s “foreign hand” allegation may fall flat.

The rise and fall of a fighter
Imran Khan was ousted as Pakistan’s Prime Minster in a late night no trust vote on Saturday (April 9), ending, for the moment, an almost storied political career. He has refused to accept defeat, saying Pakistan’s “fight for freedom” begins now. 100 Members of the National Assembly, belonging to Imran’s party, the PTI, have resigned, which means elections will now have to be held. According to the election commission of the country, this could take six to eight months. That is the situation at the moment.

So, who is Imran Khan?

Imran Ahmed Khan Niazi has been known for different activities, in different stages of his life. Following a good education, he has been a sporting hero, a Casanova, a philanthropist and a politician. He has succeeded in almost all.

He was born into an affluent family in the city of Lahore in 1952. Privileged as he was, he went on to receive a prestigious education, rounded off with a degree in philosophy, politics and economics from Oxford University.

He was a good athlete and cricket was his favourite. He made his debut for Pakistan in 1971 and went on to become one of the best cricketers the country has produced. Not only was he one of the greatest all-rounders of the sport in the world, he proved to be an astute leader as well. It was his innate talent and his leadership that allowed him to pull his country to its only one-day international (ODI) World Cup victory in 1992. That record stands unblemished.

That victory not only brought to the fore his leadership qualities, but also his aggressive nature. He had urged his players to “fight like cornered tigers” in the 1992 World Cup. That is what he will be doing now as well.

Before he hung up his cricketing boots (in 1992) he was also severally known as a Casanova. Not only has he had several interesting affairs and has married thrice, he is said to have illegitimate progenies across the globe as well.

After retirement from cricket, he became a philanthropist, raising $25 million to open a cancer hospital in memory of his mother. The Shaukat Khanum hospital remains the only cancer research hospital in Pakistan.

Thereafter, he started eyeing a political life. He used his superstar popularity to become one of the most formidable politicians of Pakistan. Pakistan is full of corruption. Imran’s fight, purportedly, was against corruption. He founded his own political party in 1996, the Pakistan Tehreek-e-Insaaf (PTI), or the Movement for Justice.

Khan won a seat in parliament in 2002, but his party mostly languished in the political wilderness. In the summer of 2013, with a crop of new voters reared on tales of the magic of Khan, the PTI roared ahead in that year’s general elections, though they were unable to win a majority.

He led thousands of protesters to Islamabad against then Prime Minister Nawaz Sharif, shutting down the capital in August 2014 during a sit-in lasting months that became known as the Azadi march, or freedom movement.

In 2018 General Elections Imran Khan’s Pakistan Tehreek-i-Insaf (PTI) party won 116 of the General Seat (out of 272), 28 Women seats (out of 60) and 5 Non-Muslim Seats (out of 10 seats) of the total 342 National Assembly seats, emerging as the largest political party in the country. The PML-N grabbed 64, 16, 2 of General, Women and Minority seats, respectively, while the PPP was in third place with 43, 9, 2 seats of General, Women and Minority, respectively.

In 2018, after more than two decades of struggle in politics, Khan achieved his long-awaited dream of becoming prime minister, promising a “new Pakistan,” and vowing to eradicate poverty and corruption.

His tenure saw him face numerous hurdles, from rising inflation to a global pandemic. Khan’s government has also dealt with record slumps in foreign exchange reserves, and last year accepted a $6 billion bailout from the International Monetary Fund.

Khan also refused to condemn Russia’s invasion of Ukraine, sparking renewed calls from the opposition for him to step down.

On a state visit last month, Khan met with Russian President Vladimir Putin in Moscow on February 24, the day Russia began its assault on its democratically-governed neighbour.

With detractors citing poor foreign policy decisions and spiralling inflation, Khan won a confidence vote from parliament just over a year ago. That luck ran out late on Saturday.

Shehbaz Sharif, the brand new Pakistani Prime Minster, is little known outside his home country, while pretty well known in Punjab, where he has been chief minister three times. He has had a good administrative record, though never on the national scenario.

Shehbaz is the younger brother of three-time Prime Minister Nawaz Sharif, Shehbaz, 70, and he led the opposition’s bid in parliament to topple Imran.

He entered politics in Punjab, becoming its chief minister for the first time in 1997 before he was caught up in the national political upheaval and was imprisoned following a military coup. He was then sent into exile in Saudi Arabia in 2000.

Shehbaz returned from exile in 2007 to resume his political career, again in Punjab.

He entered the national political scene when he became the chief of the Pakistan Muslim League-Nawaz (PML-N) party after Nawaz was found guilty in 2017 on charges of concealing assets related to the Panama Papers revelations.

Sources say that Shehbaz, unlike Nawaz, enjoys friendly relations with Pakistan’s military, which traditionally controls foreign and defence policy in the nuclear-armed nation of 220 million people.

Shehbaz, part of the wealthy Sharif dynasty, is best known for his direct, “can-do” administrative style, which was on display when, as chief minister of Punjab province, he worked closely with China on Beijing-funded projects.

“I believe fixing the economy is uppermost on my agenda. We need to give confidence to the market to make it stage a comeback. At the same time, there is also the challenge of providing relief to the masses whose lives have been made miserable due to the flawed economic policies of the PTI government,” Shehbaz told Al Jazeera.

As chief minister of Punjab, Pakistan’s most populous province, Shehbaz planned and executed a number of ambitious infrastructure mega-projects, including Pakistan’s first modern mass transport system in his hometown, the eastern city of Lahore.