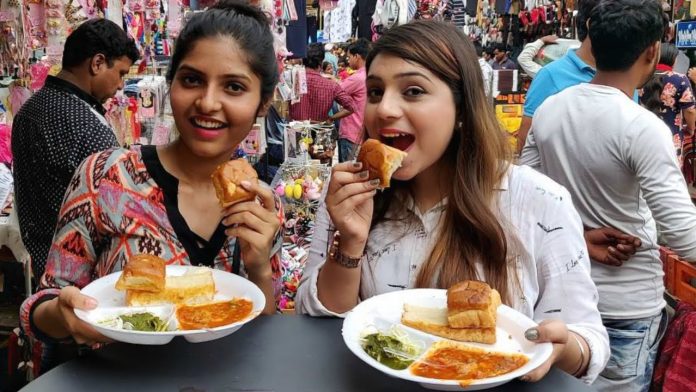 Pav bhaji is a well known fast food dish, originating in Maharashtra. It is available around the country today, but basically it is a dish central to Mumbai, dating back to the 1860s.

Pav bhaji is a spicy preparation with a mixture of vegetables, either whole or mashed, a generous dose of fresh tomatoes, a dollop of butter, optional toppings of cheese and dry fruits and fresh fruits, consumed with warm bread gently or crispy fried in butter – an all-time, anytime favourite with Mumbaikars. It is native to Mumbai and has now become popular in most metropolitan areas in India, especially in those of central and western Indian states such as Gujarat and Karnataka.

Pav means bread. Bhaji in Marathi means vegetable dish. Pav bhaji consists of bhaji (a thick potato-based curry) garnished with coriander, chopped onion and a dash of lemon and lightly toasted pav. The pav is usually buttered on all sides.

Origin of Pav bhaji
The dish was born out of necessity. There are two very similar and very interesting stories about the origin of this tasty dish.

One says that it has its origins during the civil war of America in the 1860s. Because of the civil war, there was a huge demand for cotton. Due to this, the traders at the Bombay cotton exchange used to be very busy, especially during the night, when new cotton rates used to be telegrammed from America. Thus they used to return home late and the angry wives would not serve them food.

To solve this problem the street vendors collected the leftover bread from the Jesuit priests and mixed vegetables, mash them together and used to eat them with the bread and butter. Thus pav (bread) bhaji (vegetables) was born.

The other story traces back the origin to textile mill workers in Mumbai in the 1865s. They had lunch breaks too short for a full meal, and a light lunch was preferred to a heavy one, as the employees had to return to strenuous physical labour after lunch. The dish was invented to fulfil the requirements of lunch for those textile mill workers.

They needed cheap, easy, quick-to-prepare, and light, yet nutritious food. A vendor created this dish using items or parts of other dishes available on the menu. Roti (a bread) or rice was replaced with pav, and the curries that usually go with Indian bread or rice were amalgamated into just one spicy concoction: the “bhaji.” It also became a favourite late-night street food. Since then, it has been neatly absorbed into Indian fast food, soaking up the butter and spicy curry that Indians love.

The popularity
Mumbai’s street food perhaps has the widest range of delicacies that you can possibly sample in 233 sq miles of its area. It’s a culinary universe packed onto a set of little islands. Holding true to its cosmopolitan reputation, the city’s street food, too, has various identities and avatars. Perhaps the most popular street food dish in Mumbai would be Pav Bhaji.

A spicy, soupy, crunchy mixture of vegetables, pan-fried or  tawa fried in a unique mixture of spices, served with two or three portions of the city’s famed ladi pavs, soaked in butter and chaat masala – this combination is a delight for any avid foodie. Nowadays, the humble pav bhaji, which was often served in stalls or small vendors in humble nooks and corners of the city, has now taken on a national and even an international identity, served with toppings ranging from mozzarella cheese to grated paneer to mushrooms. It has even evolved in some places to become pav bhaji pizzas.

Jain pav bhaji
Jain Pav Bhaji is a no onion, no garlic version of the regular pav bhaji made using raw bananas instead of potatoes and mashed peas. This is available in Gujarat and parts of Maharashtra.

Kathiawar
Kathiawar is a region in Gujarat which has its own special cuisine. It is part of the Saurashtra region. Its coastline borders the Gulf of Kutch to the west, the Arabian Sea to the south and the Gulf of Khambhat to the southeast and east. The pav bhaji from this region has local spices added to it, giving it a very distinct taste, and it is usually washed down with a glass of buttermilk.

Kada pav bhaji is the same as regular pav bhaji except that the vegetables in it are not mashed up i.e. the chopped and cooked vegetables are kept intact, whole.

Punjab’s version of pav bhaji
It is loaded with whole spices (garam masala), excess butter and often accompanied by a glass of ‘lassi’.

A variation where red chilli powder is substituted by Kolhapuri kanda lasun chutney to make it a spicier, garlicky version of the pav bhaji.

All-England final: Lakshya blown out of court by Dane Axelsen