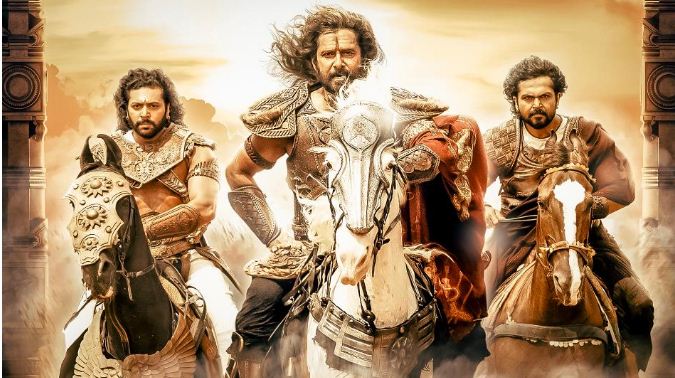 Following countless Bollywood movies on the Mughals and their grand conquests and aspirations, it had naturally become essential that other dynasties from other ages and ages of the country, many of them more powerful and longer lasting than the Moghuls shod also be taken up for highlighting in the motion picture media.

Now one movie, Ponniyin Selvan (part one) intends to portray the greatness of the Chola empire in the south of the country.

The story revolves around Vandiyadevan, a charming, brave and a brilliant young man who sets out to the Chola land to deliver a message to the king and the princess from the crown prince Aditya Karikalan. The story switches between Vandiyadevan’s travels in Chola country and the young Prince Arulmozhi Varman’s travels in Sri Lanka. The narrative deals with attempts by his sister Kundavai to bring back Arulmozhi Varman to establish political peace in a land seemingly beset with unrest and signs of civil war, plotted by vassals and petty chieftains.

Parantaka Chola was succeeded by his second son Gandaraditya as the first son Rajaditya had died in a battle. At the time of Gandaraditya’s death, his son Maduranthaka was a two-year-old child and hence Gandaraditya’s brother Arinjaya ascended the throne. After Arinjaya’s death, his son Parantaka II (Sundara Chola) was crowned. He had two sons, Aditya Karikalan and daughter Kundavai and the younger son Arulmozhi Varman, the later known Rajaraja.

When the story starts, the emperor Sundara Chola is ill and bedridden. Aditya Karikalan is the general of the Northern Command and lived in Kanchi and Arulmozhi Varman (who would be famous later as Raja Raja Chola I) is in Sri Lanka in battle and their sister Kundavai Piratti lived in Chola royal household at Pazhayarai.

The story is set in motion, when rumour starts that there is a conspiracy against Sundara Chola and his sons. One person who gets a glimpse of the Pandya conspirators is a warrior named Vandiyathevan at the palace of his friend Kandhanmaaran.

It is through Vandiyacevan that we meet most of the characters in the novel such as Arulmozhi Varman, the prince whom all the people loved, and Periya Pazhuvettarayar, the chancellor who married Nandhini (the main conspirator), when he was sixty.

During his youth, Aditya Karikalan had fallen in love with Nandhini, but she turned vengeful after Aditya Karikalan killed Veerapandiyan (who was probably her lover. It was a confusion which revolves in the story, some say it was her father) and vowed to destroy the Chola dynasty. We also meet Kundavai Devi, who after hearing the news of the conspiracy sends Vandiyadevan to Sri Lanka to give a message to Arulmozhi Varman to come back immediately.

Besides these, there are other characters like Madurantakam (the man whom the conspirators want to crown king), the son of Gandaraditya and Aniruddha Brahmarayar, Sundara Chola’s Prime Minister and the man who has eyes and ears everywhere. But the most wonderful character in the book is Brahmarayar’s spy Azhwarkadiyan Nambi, who roams around the country challenging debates. He collects information for the Prime Minister and is always around Vandiyadevan, rescuing him during trouble.

There are some lovely and adorable women too, like Vaanathi, Kodumbalur princess (the woman who becomes Arulmozhi’s wife later) who is in love with Arulmozhi; Poonkuzhali, the boat woman who rows the future king to Lanka; Mandakini, the deaf and mute step mother of the original Madurantakar Chola and the aunt of Poonguzhali. Most memorable among these is Nandhini, whose beauty is said to have the power to influence any man. Manimegalai, the sister of Kandhanmaaran (the Kadamboor prince) who helps Nandini without any knowledge that she herself is the conspirator and also he turns against Vandiyadevan, his best friend.

Meanwhile, with Poonguzhali’s help, Vandiyadevan reaches Sri Lanka, meets Arulmozhi Varman, and becomes his close friend. In Lanka, Arulmozhi Varman realizes that his father had spent some time in an island near Lanka and had been with a girl born deaf and mute. He meets her and realizes from her drawing that she and his father have had two children. Who are those children and do they have the right to the throne? Later one day in Thirupurambiyam forest Vandiyadevan sees Nandhini and the Pandya conspirators place a small boy on a throne and take a vow in front of him. Who is this boy and what right does he have to the throne?

While coming back from Lanka, Arulmozhi Varman is caught in a cyclone and goes missing. Rumour spreads that he is dead, but he survives and stays at Choodamani Viharam, a Buddhist monastery in. Then slowly the dispersed family starts assembling. The conspirators, meanwhile, choose one day in which both the king and both of his sons would be assassinated.

Meanwhile, Arulmozhi Varman recovers and returns to Tanjore, where he was forced to crown and he accepts to get the crown initially. Later, he tricks everyone and crowns to his uncle Uthama Chola.

Reviews
Perhaps no Indian film released in 2022 sans RRR and KGF2 has arrived in theatres with the ungodly hype that accompanied Mani Ratnam’s “Ponniyin Selvan I”. Based on the cult 1955 book series by Kalki Krishnamurthy, many icons like MGR and Kamal Hassan have attempted to recreate the magnum opus on screen, but it took a visionary of Mani Ratnam’s calibre to finally bring the project to fruition. With an ensemble cast and an exceptional technical crew backing him, the master director weaves his magic wand to create an immensely enjoyable period spectacle, albeit with its shares of minor bumps and flaws.

Set in the 10th century during the times when the Chola dynasty ruled over most of South India, Karthi stars as “Vallavaraiyan Vandiyadevan”, commander to the crown prince Aditha Karikalan (Vikram), and his journey to fulfil a set of tasks his liege lord sets out for him. Assigned with dismantling a seditious conspiracy brewing within the kingdom, the steadfast Vandiyadevan embarks on an arduous journey, with aid of the princess Kundavai (Trisha) as well as Karikaalan’s younger brother, the titular “Ponniyin Selvan” (meaning Son of the river Ponni, played by Jayam Ravi).

Focusing more on drama elements and political machinations and in setting up the immense world detailed in the books, “Ponniyin Selvan” is devoid of the large canvas action sequences and mass moments of typical masala-period pieces like the Bahubali franchise and RRR. Case in point, one of the most enthralling sequences in the film was the confrontation between Trisha’s “Kundavai” and the primary antagonist, the scheming “Nandini”, played by Aishwarya Rai with each actress oozing menace and gravitas, aided by the excellent dialogues crafter by screenwriters Kumaravel and Jayamohan.

A R Rahman’s music is unfortunately largely pedestrian with only the BGM composed for Trisha’s character creating any real impact. The film also indulges in setting up too many things for its second part and meanders pointlessly for large portions post the interval. The climax showdown which was intended as a brutal skirmish doesn’t come across convincingly, reducing the impact of the immersive politicking and mind games that led up to it. In short, PS-1 scores high in its drama elements while struggling to be convincing during its stunt sequences.

Nevertheless, the painstaking world-building, its clutch of ace performances and the level of political intrigue Mani Ratnam has managed to infuse into the storytelling make PS-1 a recommended watch in theatres. Cannot wait for the second part, set to release in 2023.

Production
Principal photography began on  December 11, 2019 at Krabi, Kanchanaburi and other places in Thailand, where the crew planned its shooting schedule for 40 days. After completing the first schedule in January 2020, the team planned to shoot the second schedule in Chennai, but later moved to Puducherry. The second schedule of shooting took place on  February 3,  2020 in Puducherry, and was completed within six days. Then the team moved to Hyderabad for the next schedule, on February 10, where the entire team planned to shoot at Ramoji Film City. The second schedule was wrapped up on  February 26,  2020. It was reported that, Karthi faced an accident while he was shooting in Hyderabad, where he was thrown up in the air, while riding a horse, however, he faced only minor injuries. As of March 2020, the makers shot the major portion of the film for 90 days before shooting was interrupted due to the COVID-19 pandemic. In January 2020, it was reported that the film would be split into two parts, which was confirmed by Mani Ratnam in April 2020.

Filming resumed in July 2021 at Puducherry. On  September 18 , Mani Ratnam confirmed that the entire shooting of the first part has been wrapped, except for a few sequences in the second part. However, in March 2022 Jayam Ravi, Karthi and Aishwarya Rai Bacchhan wrapped up a small patchwork left which was fully completed in 7 days.