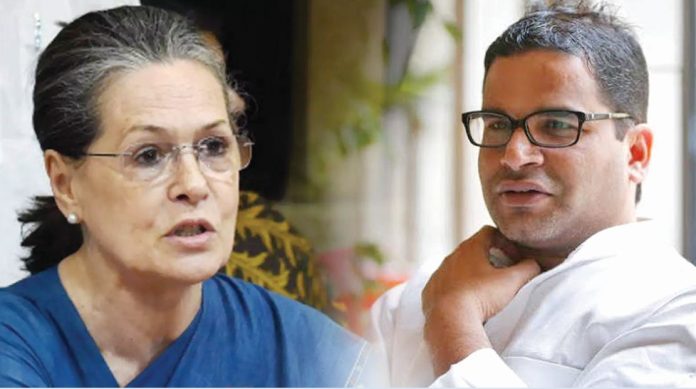 It was an “amicable parting”, we are told, though poll strategist Prashant Kishore says that he declined the Congress offer for a membership of the newly constituted Empowered Action Group 2024, effectively denying him a free hand to introduce disruptive changes. Frankly, PK is a disruptor, and the Congress is the decaying Vindhyas.

Later at a meeting with a name as fancy as ‘Nav Sankalp Chintan Shivir,’ (whatever that means), Congress interim president Sonia Gandhi maintained that there was need for some introspection. We are not sure if this has been the fallout of the meeting with PK, but such shivirs have been common with the Congress and they probably have thought so much, all grey matter has coagulated into mush.

However, at least the realisation that the party needs some organisational reforms may be helpful. She talked about some “‘atma chintan’ about our party organisation..” If that existed in the realm of the weird, she finally made us, the plebs, understand, when she added: “We need to change the way of our work.”

The presentation
PK’s presentation to the Congress starts with a quote from Mahatma Gandhi, taken from Gandhi’s book ‘India of my dreams’ (page 242). The quote says: “the Indian National Congress… cannot be allowed to die, it can only die with the nation”.

However, the Mahatma had not foreseen the incredible desire of the current batch of Congressmen to commit hara-kiri. This inexplicable death wish can only be equated with another common human trait: stupidity. It is not that PK’s disruptive formulae would have certainly revived the Congress. For all practical purposes, his entire plan of mobilising a huge army of field workers, who supposedly would be working for the sheer honour of the nation and no money is patently absurd. The Congress does not have the wherewithal to pay even a small fraction of those workers, if at all such a huge number of committee people can be found.

Thus, while the Congress continues to live in complete denial, running scared at the first signs of change, PK did try to inject a dose of adrenaline. He failed, but more importantly, the Congress failed to even wanting to try. Actually, there was some basic effort made at it. Congress interim president Sonia Gandhi actually met PK for three consecutive days, for almost 20 hours and even chief ministers had been flown in especially for this meeting. Therefore it is clear that there was an effort made from the Gandhis to accommodate at least some of the changes advocated by PK.

The big troublemakers seem to have been the hangers-on, whose jobs and livelihoods would have been in jeopardy in this. Not present was Rahul Gandhi – he again decided to take a visit to a foreign land, possibly to visit his nani in Italy – and it is not clear if his coterie of people appreciated or opposed PK.

Hence it is not just a Gandhi problem that the Congress is afflicted with. It is a disease of the smell of a comfortable rut, of inertia gone obese.

PK, of course, should have constructed his presentation with prior consultation with the party. This is not a corporate presentation and he should have been aware of it. When he suggested that Sonia be made President of the party, but the operational part be kept for a working president, people realised how PK was positioning himself. That was his seat. That would have given him the heft and opportunity to effect the changes he wanted.

Within this prescription, PK had inserted a poison pill, which said that the working committee should be mostly made of people who have come through election processes and the number of nominations should be kept to a minimum. It is the other way around now. The election processes could be the general elections or internal party elections. In his own poison pill, though, PK had faltered. It is one thing to advise a winner, it is a different matter to be that contestant. PK has never won any election – one try he had early in his career had ended in disaster – and under the Congress umbrella it is unlikely he will win anything.

PK should have also understood that Congress may be a crumbling edifice today, but it is a party which had incredible leaders. Past presidents include Womesh Chandra Bonnerjee, Dadabhai Naoroji, Surendranath Banerjee, Gopal Krishna Gokhale, Madan Mohan Malaviya, Lala Lajpat Rai, Mahatma Gandhi, Subhas Chandra Bose and many more. PK, for all his hype, does not quite fit into that list. If anything, he has to earn it.

The deal might have come through had this been a corporate stakeholder meeting. Frankly, a good return on investment is clear from PK’s presentation. But a political party is built on the skeletons of sacrifice and on a plinth of incredible dedication. The current dispensation may be bereft of any value system originally associated with the Grand Old Party, but they too have given time – decades, to be specific – to the cause. This cannot be rejected.

Then there is the issue of PK having just struck a deal with the K. Chandrashekar Rao-led Telangana Rashtra Samithi, which is at odds with the Congress. PK’s deal – now the basic deal is with I-PAC – with the Trinamool Congress is on hold at a basic level and Mamata Banerjee has been bad mouthing Congress for a while. These are pretty large irritants, and do fly in the face of his actually joining the Congress. He also has had deals with the BJP once.

Is PK out on a limb now? As far as his personal political ambitions are concerned, he is now on the bench. His chances of ever making the playing XI looks distant, but he can still return to his I-PAC and play out his dreams in proxy.