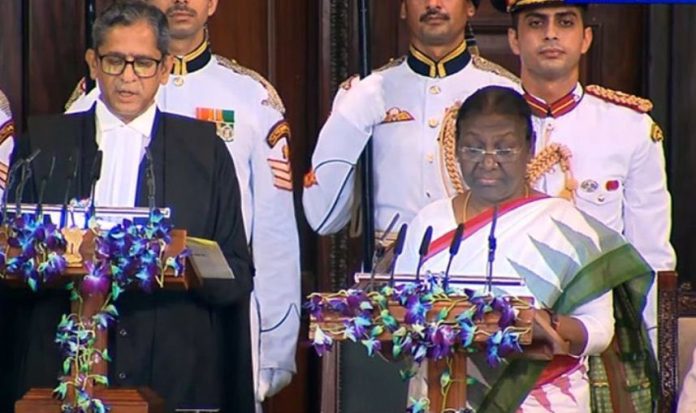 Murmu, the former Governor of Jharkhand, beat Sinha by securing 64.03 per cent of the votes.

Droupadi Murmu got a total of 2824 votes, with a value of 6,76,803, while Yashwant Sinha got a total of 1877 votes of the value of 3,80,177. These figures were declared by PC Mody, Rajya Sabha Secy-Gen and the Returning Officer for Presidential polls

Adivasi origins
Murmu, 64, is the first Adivasi and second woman to become the nation’s First Citizen and the Supreme Commander of India’s Armed Forces. Murmu was elected to two terms in the Odisha Assembly in 2000 and 2004, and served as a Minister from 2000 to 2004 in Chief Minister Naveen Patnaik’s BJD-BJP coalition government. She was sworn in as the first woman Governor of Jharkhand in 2015. That was one reason why Patnaik had his party vote for Murmu, breaking from the Opposition unity mould.

Murmu is also the first President to be born after independence and is the youngest to occupy the top post.

Among the states, Murmu got the maximum votes from Uttar Pradesh, Maharashtra and Andhra Pradesh, while Sinha’s tally was highest in West Bengal and Tamil Nadu. West Bengal was not a surprise, because Sinha had just resigned as vice-President of the party to contest the polls. It has been reported that 17 MPs from opposition parties have cross-voted in her support. All MLAs from Andhra Pradesh and Sikkim voted in Murmu’s favour, while in Arunachal Pradesh she got votes of all legislators except for four and all of all MLA except one in Nagaland.

Sinha did not get a single vote from assemblies in Andhra Pradesh, Nagaland and Sikkim. Murmu got maximum votes of Parliamentarians and least in Kerala where she got only one vote. Officials said the NDA candidate received two-thirds of the votes in all the earlier three rounds of counting.

After the first round of counting, when votes of all members of both Lok Sabha and Rajya Sabha were counted, Murmu was leading with 540 of the 748 votes polled.

With each MP having a vote value of 700 in this presidential election, Murmu had a total vote value of 5,23,600 which is 72.19 per cent of the total valid vote count of MPs polled.

Yashwant Sinha had received 208 votes of MPs after the first round of counting, with a total vote value of 1,45,600, which is 27.81 per cent of the total valid votes polled. Votes of 15 MPs were declared invalid, he said, adding that all the votes of MPs have been counted.

Eight MPs did not vote in the presidential election, Mody said.

THE GENESIS OF A PRESIDENT
Droupadi Murmu was born on June 20, 1958, in Uparbeda village of the Mayurbhanj district of Odisha (then it was called Orissa) in a Santhali tribal family to Biranchi Narayan Tudu. Both her father and grandfather were village heads under the Panchayati Raj Systems.

Droupadi Murmu married Shyam Charan Murmu, a banker who died in 2014. The couple had two sons, both of whom passed away, and a daughter Itishri Murmu.

When Droupadi Murmu had reached her in-laws’ house after getting married, she found a similar house with un-plastered walls and a thatched roof.

Draopadi Murmu has suffered a lot of pain, her loved ones passing quickly. From the year 2010 to 2014 her two sons and her husband had died. The death of the eldest son remains a mystery even today. It is said that his body was found from the room after he had returned home late one evening. The eldest son’s name was Laxman Murmu, who died at the age of just 25.

Her younger son (Biranchi Murmu) died in a road accident. Biranchi was 28 at that time. On October 1, 2014, her husband also left her forever.

Droupadi Murmu started out as a school teacher before entering state politics. She worked as an assistant professor at the Shri Aurobindo Integral Education and Research Institute, Rairangpur, and as a junior assistant at the irrigation department of the government of Odisha.

She also served as minister of state with independent charge for Commerce and Transport and Fisheries and Animal Resources Development. Apart from this, she was also an MLA for 4 years from 2000 to 2004. She got the Nilkantha award for her tremendous work after becoming MLA and she was portrayed as the best party worker and MLA.

Murmu has always kept the tribal community’s interests at the forefront. In 2017, When the Raghubar Das government passed the Chota Nagpur Tenancy Act 1908 and Santhal Parganas Tenancy Act 1949 in the Jharkhand assembly, Murmu withheld her assent. This was because the proposed laws allowed tribal people to go for commercial use of their land even though ownership would remain unchanged. Murmu was of the view that land had a motherly status for the tribal people and could not be traded off.

Awards & Honours
In 2007 Droupadi Murmu received the Nilkantha Award for the best MLA of the Odisha Legislative Assembly.