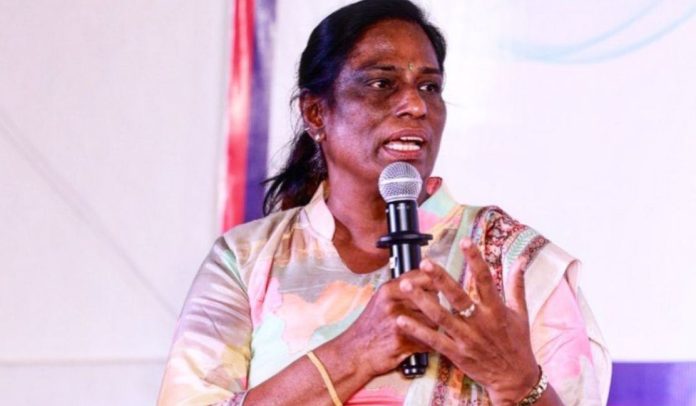 PT Usha, one of India’s best athletes ever, becomes the first woman-athlete chief of the Indian Olympic Association. Her claiming the top post is assured, because, till the end of nomination time on November 27, nobody else had filed any nomination to the post of president of the IOA.

The 58-year-old Usha, a multiple Asian Games gold medallist and a fourth-place finisher in the 1984 Olympics 400m hurdles final, had filed her nomination in time.

The election to the IOA executive council is scheduled to be held on December 10, but with the nominations closing on November 27, she is set to take over one of the most powerful positions in Indian sport.

Usha, known as the Payyoli Express, became the face of Indian track and field in the 80s. She has four gold medals at the Asian Games (1982, 1984) and narrowly missed an Olympic medal in 1984 Los Angeles Games when she finished 4th in 400m hurdles.

“With the warm support of my fellow athletes and National Federations I am humbled and honoured to accept and file for the nomination of the President of the IOA,” Usha tweeted. She put out a picture of her team that filed nominations for various IOA posts on November 27.

Jaguar Land Rover Chief Executive Officer (CEO) Thierry Bolloré has resigned from the company due to personal reasons, Tata Motors announced on November 9. JLR is a wholly-owned subsidiary of Tata Motors. Bolloré resigned due to “personal reasons”. He was appointed as the CEO of JLR in September 2020.

Speaking on his resignation, Bolloré said he was immensely proud of what “we have achieved together at Jaguar Land Rover over the last two years”. The company’s transformation and acceleration towards a sustainable, profitable future as a modern luxury business is underway at a great pace, he said.

Tata Sons Chairman Chandrasekaran thanked Thierry for everything he has done at Jaguar Land Rover. “The foundations for a successful transformation have been laid, leaving the company well poised for the future,” he said.

Adrian Mardell will now take over as interim CEO. Adrian has been part of Jaguar Land Rover for 32 years and a member of the Executive Board for three years.

Ex-India football captain Babu Mani dies at 59
Babu Mani, who was an integral part of the Indian football team in the 1980s, passed away after a prolonged battle with liver-related issues. He was 59. He represented India in 55 international matches and was a part of the first Indian team that qualified for the AFC Asian Cup in 1984.

Mani made his India debut against Argentina in Kolkata during the 1984 Nehru Cup. He was also a part of the first Indian squad to qualify for the Asian Football Confederation (AFC) Asian Cup in 1984 and went on to play in the tournament in Singapore. Mani was also a member of the Indian team which won gold at the 1985 and 1987 editions of the South Asian Games. Mani was also part of the Bengal team which won the Santosh Trophy in 1986 and 1988. He also played for and won various domestic football cups like Federation Cup, IFA Shield, Durand Cup, Rovers Cup trophies for Kolkata’s top three clubs, Mohammedan Sporting, Mohan Bagan and East Bengal.

As Switzerland Tourism’s ‘Friendship Ambassador’, Chopra will share his experiences in the country to showcase it as the ideal destination for outdoors and the best destination for hiking, biking, soft and extreme adventure and of course snow sports, for everyone be it beginners or seasoned pros.

As Switzerland Tourism’s ‘Friendship Ambassador’, Chopra will share his experiences in the country to showcase it as the ideal destination for outdoors and the best destination for hiking, biking, soft and extreme adventure and of course snow sports, for everyone be it beginners or seasoned pros.

“India is a very important long-haul market for us. And it is great to have a friendship ambassador from India representing Switzerland. Neeraj is an Indian icon and a very outdoorsy person, and he will be the perfect person to showcase the sporty and outdoor side of Switzerland as well as allow us to promote lesser-known sides of the country. We look forward to working towards a successful campaign with him,” said Misha Gambetta, Director of India, Switzerland Tourism.