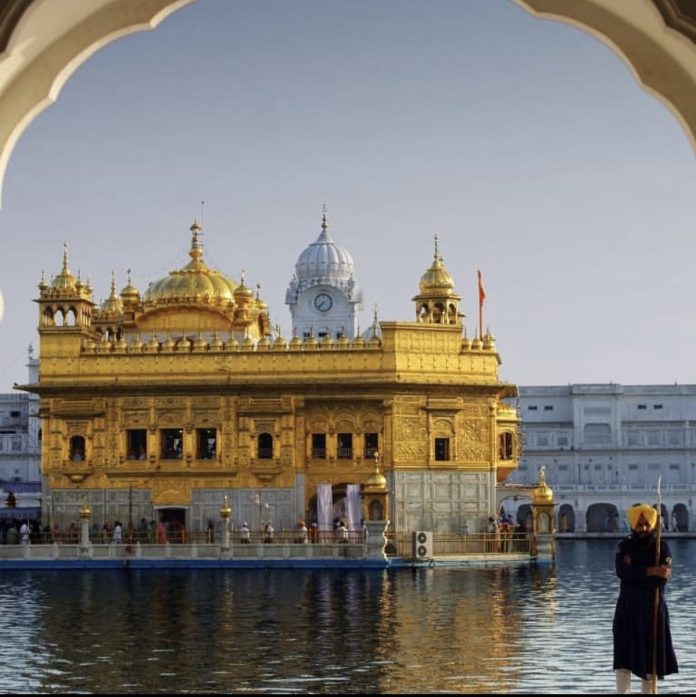 Punjab literally means ‘the land of five rivers’. It is one of the most fertile states of India which is one reason for its immense agricultural prowess. The state has also played a vital role in shaping the history of the country and is known to be the birthplace of one of the youngest religions of the world, Sikhism.

That apart, the state boats unique culture and has several places of natural beauty which makes visiting Punjab a very interesting proposition for tourists.

Another thing that attracts multitudes of tourists to Punjab is the opportunity to visit the old temples and gurudwaras in Punjab. There are some great pilgrim sites scattered across the state that can be visited through some of the most memorable road trips to Punjab.

Here are some of the most prominent pilgrim sites to visit while in Punjab.

Golden Temple, Amritsar
The Golden temple is located in the holy city of the Sikhs, Amritsar. The Golden temple is famous for its full golden dome, and is one of the most sacred pilgrim spots for Sikhs. The Mandir is built on a 67-ft square of marble and is a two storied structure.

Constructed between 1585 and 1604, the Golden Temple, or Harmandir Sahib, is the holiest place for the Sikh community. Maharaja Ranjit Singh had the upper half of the building built with approximately 400 kg of gold leaves.

The fourth Guru of Sikhs, Guru Ram Das, who had initially constructed a pool here, founded Amritsar, which houses the Golden Temple. It said that it is here that Sage Valmiki wrote the epic, Ramayana.

The ‘Guru Ka Langar’ offers free food to around 20,000 people every day. The number shoots up to 100,000 on special occasions. A visitor must cover his / her head before entering the temple premises. The Granth Sahib is kept in the Temple during the day and is kept in the Akal Takht or Eternal Throne in the night. The Akal Takht also houses the ancient weapons used by the Sikh warriors. Guru Hargobind established it.

How to Reach : By Air; Sri Guru Ram Das International airport nearest airport from Golden Temple and distance from the airport is 13 km.

By Train : Amritsar Railway Station is the nearest railway station to the Golden Temple and distance from the station is 2 km.

By Road : Bus Stand Amritsar nearest bus-stop from Golden Temple and distance from the bus-stop is 1.7 km.

Durgiana Temple, Amritsar
This is one of the religious places in Punjab for the Hindu community. It is the Devi Talab Mandir, which is considered to be one of the 51 shakti peethas.

The original temple existed from ages back, but it was built properly and to its present glory in the third decade of the 20th Century, echoing not only the traditional Hindu temple architecture but that of the Golden Temple. Quite like the way the Golden Temple has been constructed, this temple, too, rises from within a tank and has canopies and the central dome in the style of the Sikh temple.

It is believed that Devi’s right breast fell here. The temple is dedicated to the goddess Kali who is worshipped here. Lately, the old Devi Talab was renovated and in the centre, the new temple was built.

You will also find a masonry 200-year-old tank in the temple, which is sacred for the Hindu community. One of the greatest reformers and political leaders of resurgent India, Pandit Madan Mohan Malviya, laid its foundation stone. It is a well-known repository of Hindu scriptures.

How to Reach
By Air: Sri Guru Ram Das International airport nearest airport from Durgiana Temple and distance from the airport is 11 km.

By Train: Amritsar Railway Station is the nearest railway station from Durgiana Temple, at distance of 700 m.

By Road : Bus Stand Amritsar nearest bus-stop from Durgiana Temple and distance from bus-stop is 1.5 km.

Panch Mandir Kapurthala
Panch Mandir is one of the religious and tourist attractions in Kapurthala now. Several Hindu gods and goddesses are worshipped in this temple. The temple has gained a lot of attention because of its architecture and design, and it looks pristine during moonlit nights.

Panch Mandir of Kapurthala is a place of reverence for all faiths. This temple is home to five small temples. Built during the reign of Sardar Fateh Singh, an extraordinary feature of this temple is that from the entry door, one can view all the five idols and pay obeisance to all.

Nearby places to visit: Jagatjit Palace

How to Reach
By Air: Kapurthala does not have an airport of its own, with the nearest airport being the Raja Sani Airport at Amritsar, which is at a distance of 75 km.

By Train : Kapurthala falls on the Jalandhar- Ferozepur railway line.

By Road: Kapurthala falls on the Jalandhar-Ferozepur road.

The mosque’s architectural design is based on the Grand Kutubiyya Mosque in the city Marrakesh of the Kingdom of Morocco.

The Moorish Mosque, commissioned by the Maharaja, was completed in 1930. French architect, Monsieur M Manteaux who designed the mosque had also designed the Jagatjit Palace in the city. The masjid is reminiscent of similar structures in Morocco and Alhambra, with colour schemes and design elements that seem more like in Seville in Spain, than in Punjab.

The cost of building the mosque was Rs 600,000 at that time. The mosque was inaugurated by Nawab Sadiq Mohammed Khan Bahadur, the Nawab of Bhawalpur. An inscription on the mosque states that it was built in a period of four years.

The calm and peaceful atmosphere is truly a tribute to the character of the mosque.

A minbar (also pronounced mimbar) is a pulpit in mosques from where the imam stands to deliver sermons (khutbah). The minbar of this mosque looks grand.

How to Reach
By Air: nearest airport is the Raja Sani Airport at Amritsar,  which is at a distance of 75 km.

By Road : Kapurthala falls on the Jalandhar-Ferozepur road.

Sri Rauza Sharif Fatehgarh Sahib
On the Sirhind-Bassi Pathana Road, near Gurudwara Fatehgarh Sahib is the magnificent Rauza or dargah of Shaikh Ahmad Faruqi Sirhindi, popularly known as Mujaddid, Alf-Isfani who lived in the times of Akbar and Jahangir from 1563 to 1624. The Shaikh is held in high esteem and is considered by Sunni Muslims to be second to prophet Mohammed.

For this reason, this mausoleum is regarded as a second Macca by the Sunni Muslims. Every year, thousands of pilgrims from various parts of the world visit this place to participate in the celebrations, known as Urs of Shaikh Ahmad Sirhindi. The date of annual celebrations vary from year to year. Every year, these celebrations precede ten days more than the previous year.

How to Reach
By Air: The nearest airport is International Airport Mohali/Chandigarh about 50 km from Fatehgarh Sahib.

By Train: The district has Sirhind junction railway station on the Delhi-Amritsar section.

By Road : By road Fatehgarh Sahib is 250 km from Delhi.

Gurdwara Dera Baba Nanak Gurdaspur
Dera Baba Nanak is a small city located in the Gurdaspur district of Punjab, India. The city lies at a distance of about 1 km from the India-Pakistan border. Considered one of the most sacred cities of the Sikhs, it is situated on the banks of the river Ravi. Gurdwara Kartarpur Sahib can be seen from the Border with naked eyes at a distance of about 4-5 km.

The town has a number of gurudwaras. Pilgrims come to this holy town in large numbers. Dera Baba Nanak was made the headquarters of the newly created Tehsil of Dera Baba Nanak. Dera Baba Nanak is a historical town and has many lanes and houses that have been preserved since the time of Guru Nanak. Also from this town, pilgrims can see across the border into Pakistan and see the Gurdwara Darbar Sahib at Kartarpur.

Gurudwara Sri Darbar Sahib was built in commemoration of Guru Nanak. He came here after his first Udasi (tour) during December 1515 AD to see members of his family. His wife Mata Sulakkhani and his two sons Sri Chand and Lakhmi Chand had come to stay here in their maternal home at Pakho-Ke-Randhawa near Dera Baba Nanak, where Lala Mool Raj, father–in–law of Guru Nanak, was working as a Patwari.

Mukteshwar Mahadev Temple
Mukteshwar Mahadev Temple is one of the highly revered temples among Lord Shiva devotees. It is a cave temple that lies at the base of a mountain located on the shores of the Ravi river. The entire temple is made from a single hill. According to the legends, Pandavashad spent a few days at this temple during their exile. The temple provides a mesmerizing sight to devotees.

It is highly popular for its white marble Shivalinga, the idols of Lord Hanuman, Goddess Parvati, Lord Brahma, Lord Vishnu, and Lord Ganesha. When you enter this idol, you will find all these idols in the compound of this temple. Looking at these beautifully adorned idols with garlands, jewels, and colourful clothes, and a serene environment fills people with joy and ecstasy.

It was named “Golaknath Memorial Church” in memory of Rev. Golak Nath, who was the first Indian missionary in Doaba belt of Punjab. He rendered his selfless Christian ser-vices for 44 years in Jalandhar and surrounding region with great missionary zeal and devotion.

It is a grand old English country style church with a high slanting roof. The entrance is through a beautiful arch shaped porch. The doors and windows are made of the best quality of wood having the same attractive arch shape on their top.

The main entry door of the church has exquisite engravings, lending a touch of class to the building. Comfortable, strong and tastefully made wooden benches are provided for a congregation of approximately 250 persons.

How to reach
By Train: Nearest Railway Station is Jalandhar cantt approx 3km.

Gurudwara Achal Sahib, Jalandhar
This gurudwara is visited by devotees and tourists from across the country. It is believed that Guru Nanak Dev Ji stopped here during one of his travels. He discussed with Jogi Bangar Nath, after which Jogi Bangar Nath bowed his head to Guru Nanak Dev Ji. This gurudwara was also visited by Shri Guru Hargobind Singh Ji, and he even got eight cornered wells dug in front of the gurdwara.

How to reach
By road: situated on the Batala-Jalandhar road. It is only 7-8 km from Batala Distt Gurdaspur.

Akal Takht, the highest temporal seat of Sikhism was founded by the Sixth Sikh master Guru Har Gobind Sahib Ji in the year 1609, assisted by Baba Budha Ji and Bhai Gurdas. Guru named it Akal Takhat (The throne of Almighty). Guru Hargobind Sahib used to hold his court, and listened to the woes of the needy.

Akal Takht has its own traditions i.e. the priest will recite the evening prayer (Rehras Sahib) and Ardas, with a naked sword in hand.

Some rare weapons pertaining to the Sikh Gurus and Sikh warriors are displayed during the day in Golden Palanquin and explained to the visitors every evening.

Backwaters of beauty and peace

The little beauty of Sikkim