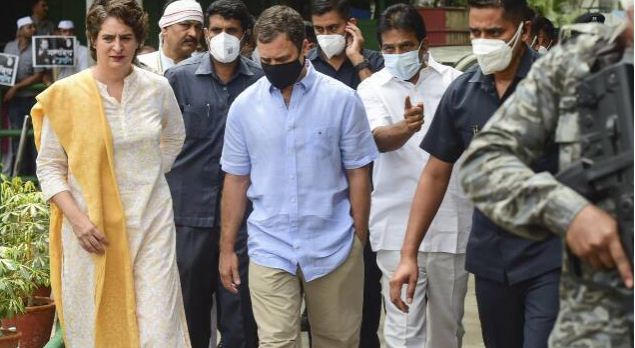 Rahul Gandhi was today (June 13) grilled for three hours by the ED in a money laundering allegation. He left the ED office for lunch and will be back later for further questioning.

Congress leaders took to the streets on Monday as Rahul Gandhi appeared before the ED for questioning in a money laundering case, with the police heavily barricading central Delhi areas and detaining party leaders for violating prohibitory orders.

Rahul Gandhi arrived at the probe agency in central Delhi around 11 am after he started from the Congress office on Akbar Road accompanied by a large convoy of party leaders including Priyanka Gandhi Vadra, Rajasthan Chief Minister Ashok Gehlot and Baghel. In view of the barricading, Gandhi took a detour to reach the probe agency’s office.

This is the first time that Gandhi has appeared before a central probe agency for questioning in a case. Congress MPs and workers had assembled at the AICC headquarters where Surjewala announced they would march peacefully towards the ED office and if they were stopped, they would be arrested.

Raising slogans in support of Gandhi, Congress workers started a march towards the ED office but were stopped by the police which had put up barricades all around the AICC office. Some Congress workers also mounted barricades. A large number of workers were taken into preventive custody for violating the provisions of Section 144 CrPC banning assembly of more than four persons, which was imposed in central Delhi.