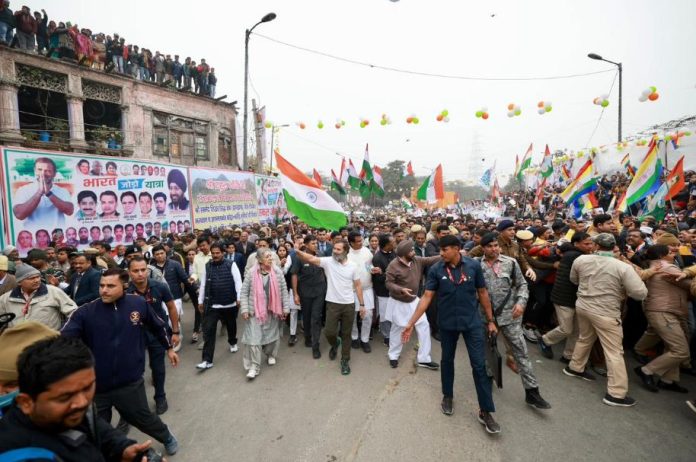 Following a nine-day rest, Congress’ Bharat Jodo Yatra, led by Rahul Gandhi, started off again, on the cold morning of January 3, from Hanuman Mandir, at Kashmiri Gate of New Delhi. The Yatra entered Uttar Pradesh on this leg of its journey, having already completed over 3,000 km across many states of the country.

While there seems to have been a small setback in Samajwadi Party leader Akhilesh Yadav declaring that he will not be part of the Yatra, but it did not quite show in the huge gathering that was with Rahul, singing patriotic songs and chanting the ‘Bharat Jodo’ slogan. Akhilesh, though, has thanked Rahul for inviting him to be part of the Yatra and wished Rahul success.

Akhilesh, in a letter, said: “India is a feeling which is beyond geographical expansion, where there is love, non-violence, emotions, co-operation and bonhomie — the positive elements, which unite India. Hope that this yatra achieves its aim of conserving this inclusive culture.”

A large number of Congress leaders gathered to see of Rahul on the next leg of his Yatra, many to participate as well. The Yatra will move through Uttar Pradesh for two days before entering Haryana’s Panipat. That will be by December 5.

Mayawati tweeted on Monday and thanked Rahul for his invite to join the Bharat Jodo Yatra. “I extend my wishes to the ‘Bharat Jodo Yatra’ and thank Shri Rahul Gandhi for inviting me,” said Mayawati

The Yatra entered Delhi on December 24 morning and was accorded a warm welcome at the Badarpur border. A large number of workers from Delhi Congress-led by Delhi unit chief Anil Chaudhary welcomed Gandhi and the Yatris at the Delhi border in Badarpur. The yatra entered Delhi from the Faridabad side in Haryana.

In view of the yatra, the Delhi Traffic Police on Monday issued a travel advisory for the yatra which will start from the central part of the city.

Important points for this Yatra