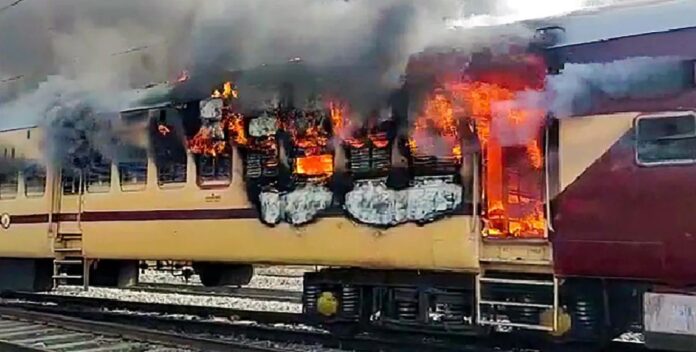 Even  as protests against the Railway Recruitment Board (RRB) Non-Technical Popular Categories (NTPC) competitive examinations continued, the agitating students on Republic Day set on fire train compartments in Gaya. The protesters also allegedly pelted stones at the police in Jehanabad and tried to obstruct the movement of trains in Bhagalpur.

In Gaya, as cops tried to disperse the protesters, some of them set a train on fire. The train was stationary and empty at that time, and no injuries were reported from the incident. This was the second instance. The day before, students had set fire to the engine of the Ara-Sasaram passenger. The inside of the engine completely burnt.

The loco pilot of the train jumped to save his life and somehow managed to control the fire due to which the fire did not spread to the bogie of the train.

Railway Minister Ashwini Vaishnaw has urged students who are protesting RRB NTPC exam in Bihar to calm down and submit their demands formally. The Union minister urged the aspirants to not indulge in violence. “I request students that the railway is your property, please do not destroy it. We will solve your problems.The Railway Ministry later suspended the Non-Technical Popular Categories (NTPC) and Level 1 exams . We will solve your problems.

He was India’s longest-serving four-star General

He was India’s longest-serving four-star General. General Rawat’s wife Madhulika Rawat and twelve other defence force personnel had also died in the helicopter crash. Former UP Chief Minister Kalyan Singh, who died on August 21, was also awarded the Padma Vibhushan.

FORMER West Bengal Chief Minister Buddhadeb Bhattacharya has refused to accept the Padma Bhushan award, as per tradition of the country’s communists. Bhattacharya, who is ailing, said he was not aware that he had been named for the Padma Bhushan and he would reject it if it were so. Instances of individuals refusing the Padma awards have been very rare.

Bhattacharya’s statement was published in the state CPI (M)’s social media pages. Reports say that the Union Home Secretary had spoken with his wife about the award this morning. A staunch critic of Prime Minister Narendra Modi’s government, the 77-yearold has been suffering from age-related ailments along with heart and lung conditions for quite some time and has largely retracted himself from public appearance.

40 year old Devendra Jhajharia, who impressed with his performance at the Tokyo Paralympics, has been awarded the Padma Bhushan. He said: “Main aaj bahut khush hun. And first and foremost I want to thank Prime Minister Modi ji for honouring the first ever para-athlete with a Padma Bhushan in the history of India. This will have a very encouraging ripple effect on all young and aspiring para-athletes!”

Jhajharia completes 20 years as a para-athlete this year. “My dream was always to win a medal for my country. I never thought or dreamt of getting a Padma Bhushan award nor was my focus on anything other than serving my nation. I feel overwhelmed and motivated to win this award,” Jhajharia said.

3 Navy personnel killed in explosion on board INS Ranvir

Three Navy personnel were killed and 11 injured in an explosion aboard the destroyer INS Ranvir at the Naval Dockyard in Mumbai recently. A statement issued by the Navy said: “In an unfortunate incident at Naval Dockyard Mumbai, three naval personnel succumbed to injuries caused by an explosion in an internal compartment on-board INS Ranvir.” The ship’s crew responded immediately and brought the situation under control quickly, the statement said. “No major material damage has been reported.”

The ship’s crew responded immediately and brought the situation under control quickly.

The incident took place at 4.30 pm on January 25 on NS Ranvir, which had been on cross-coast operational deployment from the Eastern Naval Command since November 2021 and was due to return to the base port shortly. A board of inquiry has been ordered.