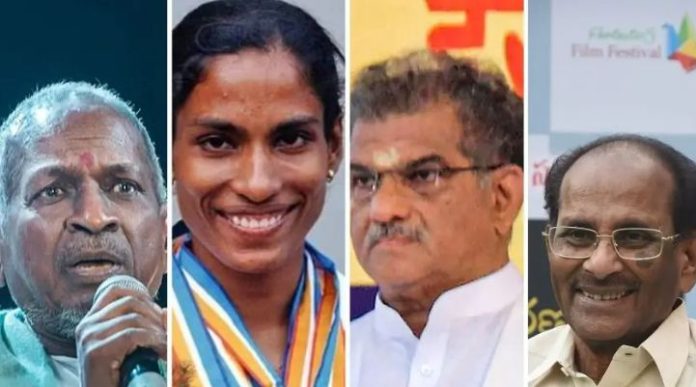 The nominations, done by President Ram nath Kovind on the advice of the Union Cabinet, are in line with the Bharatiya Janata Party’s concerted effort to expand its footprint in the south of the country as all four nominees are from as many southern states. While PT Usha is from Kerala, Ilaiyaraaja is from Tamil Nadu, Heggade from Karnataka and Prasad from Andhra Pradesh.

PT Usha
Popularly known as the ‘Payyoli Express’, PT Usha is one of India’s most iconic sportspersons. She has represented the country and won medals at various international sporting events, including the Olympics, World Junior Invitational Meet, Asia Championships, and Asian Games.

Born on June 27, 1964 in in Kuttali, Kozhikode, Kerala, she has been associated with Indian athletics since 1979. She has won 4 Asian gold medals and 7 silver medals.

Her best was at the 1984 Los Angeles Olympics. At the Olympic trials in Delhi, she beat Asian Champion M. D. Valsamma to qualify for the Games in the 400m hurdles. At another pre-Olympics trials, she clocked 55.7 seconds beating American top sprinter Judi Brown. At the Games, she clocked 56.81 s in the heats and 55.54 s in the semi-final, setting a new Commonwealth record as she entered the final.

At the final, she came fourth, at 55.42 seconds, falling behind the eventual bronze medalist by 1/100th of a second. This followed after one of her competitors had a false start, which was said to have “broken her rhythm” as “she got off the blocks a bit slower at the restart.”

Ilaiyaraaja
Born in a Dalit household in a village in the Madurai district of Tamil Nadu, Ilaiyaraaja is regarded as one of India’s greatest music composers.

Padding up for the polls