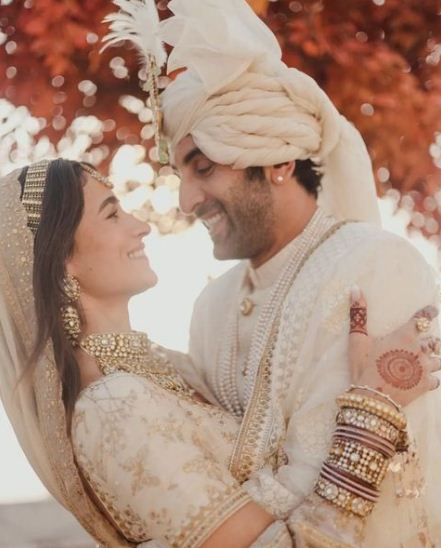 Ranbir Kapoor and Alia Bhatt ‘walked down the aisle’ on April 14 in his house, Vastu. Their private ceremony was attended by their family and close friends. A mehendi was held the day before. Alia Bhatt and Ranbir Kapoor met on the sets of Ayan Mukerji’s Brahmastra and fell in love.

Ranbir Kapoor and Alia Bhatt’s wedding brought a lot of attention to Bollywood. The actress had once confessed that she has had a crush on RK (Ranbir Kapoor) since she was 11 years old. This leaves many wondering about the age gap between the two. Well, Ranbir Kapoor is 10 years older than Alia Bhatt. The Raazi actress is 29 years old while Ranbir Kapoor has turned 39. But this is not the first time that an actress has chosen a partner who is older than her.

After getting married, Alia Bhatt shared dreamy photos from her wedding. She had captioned them as “Today, surrounded by our family and friends, at home … in our favourite spot – the balcony we’ve spent the last 5 years of our relationship – we got married. With so much already behind us, we can’t wait to build more memories together .. memories that are full of love, laughter, comfortable silences, movie nights, silly fights, wine delights, and Chinese bites. Thank you for all the love and light during this very momentous time in our lives. It has made this moment all the more special. Love, Ranbir and Alia.”

Lieutenant General Manoj Pande has been appointed the new Chief of Army Staff. He succeeds General M M Naravane. Manoj Pandey will be the first engineer of the country, who will be given the command of Army Chief.

In a Twitter post, the Indian Army said: “General MM Naravane #COAS & All Ranks of #IndianArmy congratulate Lieutenant General Manoj Pande #VCOAS on being appointed as the 29th Chief of the Army Staff #COAS of the #IndianArmy. Lt Gen Manoj Pande will assume the appointment of #COAS on 01 May 2022.”

He has been Vice Chief of Army Staff since February 1 this year. He is an alumnus of the National Defence Academy and was commissioned in the Corps of Engineers (Bombay Sappers) in December 1982.

According to the Army, he was part of Operation Parakram, the 2001-02 India-Pakistan stand-off in the wake of the Parliament attack. The standoff saw massing of thousands of troops on either side of the border and along the Line of Control in J&K.

“The General Officer has commanded 117 Engineer Regiment during Operation Parakram in the sensitive Pallanwala Sector of Jammu and Kashmir, along the Line of Control,” the Army said.

Tanzania’s Samia Suluhu Hassan made history when she was sworn in as the country’s first female president after the sudden death of John Magufuli from an illness shrouded in mystery. Hassan, 61, a soft-spoken Muslim woman from the island of Zanzibar and vice president since 2015, will finish Magufuli’s second five-year term, set to run until 2025.

Since ascending to power in March last year, Hassan has positioned herself as a unifying national figure willing to challenge the establishment and bent on bringing her country in from the cold after five years of isolationism under Magufuli, who rarely travelled abroad.

Tanzania, a nation of 60 million people that borders eight other countries in eastern, central and southern Africa, was long seen as a bulwark of stability in a region torn by ethnic strife and civil war.

Foreign secretary Harsh Vardhan Shringla will take over next month as G20 chief coordinator, the government officially announced. The appointment is significant as India will assume the G20 presidency on December 1, 2022, from Indonesia, and will convene the G20 Leaders Summit for the first time in India in 2023.

The G20 Summit will be the biggest multilateral event hosted by India in recent years and will entail all P5 (US-Russia-China-UK-France) delegations simultaneously in India.

Shringla during the past two years, while cultivating ties with all major powers and neighbours, has led from the front in the efforts to evacuate Indians stranded abroad during Covid as well as from Afghanistan and Ukraine.

Manoj Soni is chairman of UPSC

Manoj Soni shares close ties with the Bharatiya Janata Party and the Rashtriya Swayamsevak Sangh, and is also linked to a religious sect in Gujarat.