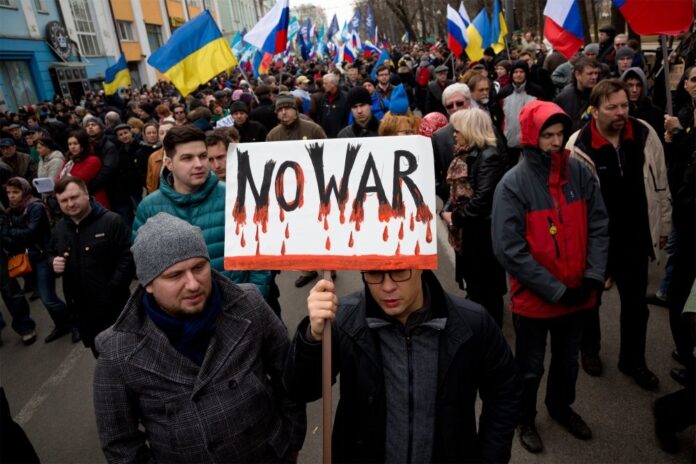 The Russian army has entered Ukraine, and it has wreaked havoc, killing over 350 civilians in the first five days, and creating over half a million refugees and counting. That was almost expected. What was not expected was the West’s almost total refusal to get involved, other than issuing blood-curling, yet somewhat impotent threats.

They knew that their condemnation motion in the UN Security Council would not pass, with February’s president and permanent member Russia having a veto power, yet they went ahead. Was it just to record their feelings? This was a shame.

Putin’s decision to subdue unrelenting Ukrainian Volodymyr Zelensky was not as sudden as has been made out to be by the US and the rest of Europe. It was no secret that from March 2014, following the Ukrainian revolution and the Euromaidan movement, protests by pro-Russian, anti-government separatist groups happened in the Donetsk and Luhansk oblasts of Ukraine, collectively called the Donbas region. This is common knowledge.

Also, everybody realised the UN Security Council’s bias when, in February and March 2014, Russia invaded and subsequently annexed the Crimean Peninsula, tearing it off Ukraine. The signs were clear for a long, long time. Yet, the so-called free world refused to act. Were they expecting a change of heart of Vladimir Putin?

As for the NATO’s absurd claims of ‘protecting’ people, let it be known that it will not put a single boot in regions that do not pay it. Zelensky has been trying from 2014 to get into NATO and now it seems that there must have been a more sinister reason for existing nations not allowing Ukraine into its fold. A lot is rotten in the state of Denmark.

The media, also as expected, is sharply partitioned along the divide. The so-called free-world media never saw anything wrong in the US invasion of Iraq or the merciless killings in Syria by the Bashar al-Assad’s regime, as long as it suited the West.

In 2014 – that year keeps popping up – President Barack Obama came close to bombing a group of rebels. This group was identified as the extremist Muslim Brotherhood, but in this case, they were driving to fight Assad. What was the reason for world media’s inaction?

The US, led by George Bush, attacked Iraq after it fooled the world by saying that Saddam Hussein had accumulated Weapons of Mass Destruction. Nothing was found, except that Saddam was dragged out of a hole and hanged.

We all know the chaotic aftermath. So what was the problem? The US and its allies were protecting democracy in Iraq, weren’t they? Saddam was collateral damage.

This was not the end. When Libyan ruler Muammar al-Qaddafi was killed, the media applauded. When the refugees from Syria and Libya trudged along to other nations for refuge, they were sent right back. Thousands perished.

If a few hundreds were given refuge by a developed nation, the leader of that nation was accorded high praise by the world media.

It continues. If there is a refugee exodus from Ukraine (this has now started), Western powers will curry favour from everybody it can for a few crumbs given to the refugees. But how can they be wrong? They are protecting democracy.

This concept, that the US and a few countries in Europe comprise the high table of the world’s democratic values, is a complete fib. So is the UN.

War is the last thing that should happen, anywhere in the world. Humanity should be the final word in any political dictionary. If Putin is in the wrong, so are the self-appointed preachers of peace from the West.

To top it all, the Russia Today site, the only international English news channel that may have placed before the world a Russian viewpoint, was hacked. It was, for long hours, out of reach, and people got to know what went on inside Ukraine only from biased western media. That is not a very good state of affairs.

Somewhere, there has to be a neutral power, a neutral news source, a neutral viewpoint. As of now, there is complete polarisation.