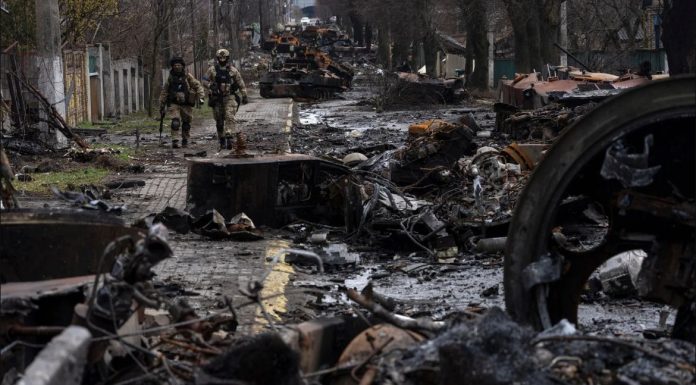 Yes, the Russia-Ukraine war is still on. sad that it is, it is getting as tedious as the Covid-19 pandemic. But lives are being lost, the West is still issuing strong messages against Russia and against Vladimir Putin and Ukrainian President Volodymyr Zelenskyy is still growing as the Avenger-in-Chief.

Here is a timeline, since we last reported on the war:

TIMELINE
April 1: The governor of Ukraine’s southern port of Odessa says air defences thwart an attempted attack on “critical infrastructure facilities, the destruction of which could be dangerous for the civilian population”.

Reports say that Russia is using proxy groups in Syria to recruit fighters for Ukraine.

April 2: As Russian troops withdraw from Bucha, a town northwest of Kyiv, dozens of corpses in civilian clothes are found on the streets. Bucha’s Deputy Mayor Taras Sapravskyi says there are 300 corpses, of which 50 have been summarily executed. Mayor Anatoly Fedoruk says 280 bodies have been buried in a mass grave in Bucha.

April 3: Human Rights Watch says it has verified and documented war crimes by Russian occupying forces in the areas of Kyiv, Kharkiv and Chernihiv, in northern Ukraine. Local residents told reporters the dead lying on the streets of Bucha were their civilian neighbours and had been killed by Russian forces.

April 4: US President Joe Biden calls for Putin to stand a war crimes tribunal for the alleged Russian killings of civilians in Bucha. Jake Sullivan, US national security adviser, says the killings were part of a premeditated plan to imprison or kill dissidents.

April 5: The UN International Organisation for Migration says the number of internally displaced people in Ukraine has reached 7.1 million, a 10 percent increase since March 16.

April 6: The UN’s humanitarian chief, Martin Griffiths, has said he is not optimistic about securing a ceasefire to halt the fighting in Ukraine following high-level talks in Moscow and Kyiv. US plans to starve Russia’s ‘war machine’

More than 100 attacks on healthcare in Ukraine: WHO