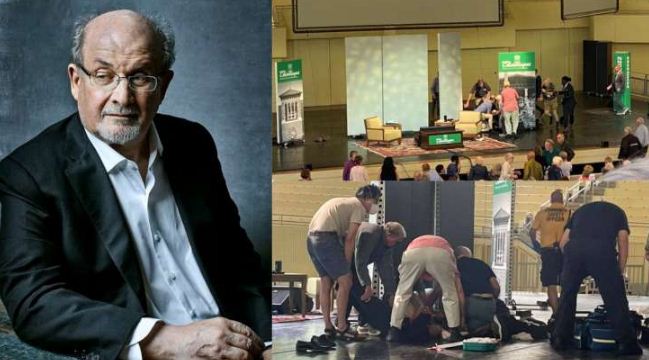 A literary gathering at the Chautauqua Institution in New York on August 12 turned out to be shocker. Booker Prize-winning author Salman Rushdie, who had been there to deliver a lecture, was attacked on stage. The 75-year-old author was stabbed 15 times by the suspect, identified as Hadi Matar, 24, of Fairview, New Jersey.

Rushdie was later airlifted to a hospital, where he was put on ventilator support for roughly a day. A day after the attack, his agent Andrew Wylie confirmed that Rushdie was taken off the ventilator and he was talking.

Rushdie had written ‘The Satanic Verses’ in 1988, roughly 34 years ago after which he suffered death threats for several years for writing the book.

New York police said a state trooper assigned to the event took a suspect into custody after the attack. According to New York State Police Major Eugene Staniszewski, the Mujahidin of Islam group claimed responsibility for the attack. Al Qaeda also put him on its hit list along with several literary and media figures it claimed insulted Islam.

The Indian-born novelist catapulted to fame with Midnight’s Children in 1981, which went on to sell over one million copies in the UK alone.

Rushdie, who had received death threats from Iran for his late eighties book ‘The Satanic Verses’, was “stabbed” at least once in the neck and once in the abdomen onstage.

The surrealist, post-modern novel sparked outrage among some Muslims, who considered its content to be blasphemous, and was banned in some countries.

A year after the book’s release, Iran’s Supreme Leader Ayatollah Khomeini called for Rushdie’s execution. He offered a $3m (£2.5m) reward in a fatwa – a legal decree issued by an Islamic religious leader.

The bounty over Rushdie’s head remains active, and although Iran’s government has distanced itself from Khomeini’s decree, a quasi-official Iranian religious foundation added a further $500,000 to the reward in 2012.

Iran has denied carrying out other operations abroad against dissidents in the years since the country’s 1979 Islamic Revolution, though prosecutors and Western governments have attributed such attacks to Tehran.

The Satanic Verses was banned first in India, and then several other countries before Iran’s Ayatollah Khomeini issued his infamous fatwa.

Salman Rushdie has faced death threats for more than 30 years since the publication of The Satanic Verses. Rushdie said the main thrust of his novel was to examine the immigrant experience, but some Muslims were offended by portrayals of the Prophet Muhammed and the questioning of the nature of the revelation of the Quran as the word of God.

Rushdie went underground with British government protection for several years and moved to the US in 2000 and has since been in public. Several literary events attended by Rushdie have been subject to threats and boycotts – but he continues to write. His next novel, Victory City, is due to be published in February 2023.