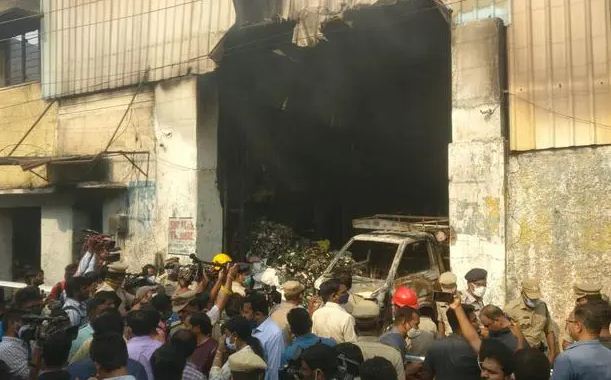 A massive fire in a timber depot-cum-scrap godown at Bhoiguda, Secunderabad, early on Wednesday (March 23) has killed at least 11. At least 15 workers had been sleeping at the site at the time of the accident. While two people escaped to safety, 13 were stuck inside.

Rescue officials have retrieved 11 bodies and shifted them to Gandhi Hospital morgue for autopsy.

According to a senior police official the workers were “sleeping in two rooms on the floor of the godown when the fire broke out. We suspect they were trapped and inhaled smoke, before they were burnt to death.”

Nine fire tenders struggled to bring the fire under control. The suspicion was of a short circuit, though this has not been confirmed.

The bodies were charred beyond recognition and DNA tests will be conducted before the bodies are handed over to their families. Only one person was rescued alive.

Animal Husbandry Minister Talasani Srinivas Yadav too visited the site and interacted with the locals. Talking to reporters, Yadav said an enquiry has been ordered into the incident. He promised to provide assistance to the victims of the families from the state government. Chief Minister K. Chandrasekhar Rao condoled the death of the 11 migrant workers and announced Rs5 lakh ex-gratia payment to the families of each victim.