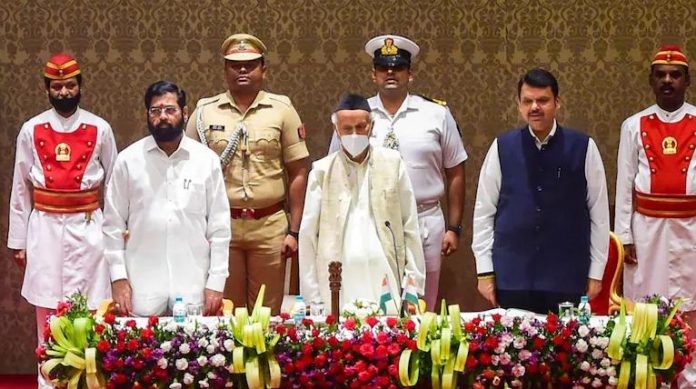 As the Supreme Court, late on June 29, refused to stay a floor test order of the Maharashtra governor, Chief Minister Uddhav Thackeray realised that the game had been taken away from his hands. He knew he did not have the numbers, and resigned. With that, the basic structure of the Maha Vikas Aghadi, formed in 2019, fell apart. In a strange turn of events later, Udddhav’s nemesis in the show, Eknath Shinde, was named Chief Minster, with former chief Minister, Devendra Fadnavis of the BJP, ordered by the Sangh to take a demotion and be Shinde’s deputy. With this the BJP is back in action in the financial capital of the country. No floor test was needed.

This was the culmination of 10 days of incredible drama, where Shiv Sena rebel leader Eknath Shinde led a group of rebel MLAs, first flying them off to Ahmedabad, then to Guwahati within a flood-hit Assam and then to Goa, always staying in plush resorts/hotels and then finally back to Mumbai when the path had been paved. The final numbers (see box) indicated that horse trading was intense and prices of hotel rooms and flight prices etc (even the food) made one realise that there were powerful and well endowed (financially) forces at play in this move. The Uddhav-led faction fought tooth and nail, but in the end had to give up.

Uddhav resigned through a Facebook live broadcast. He also resigned from his membership to the upper house of the state assembly. He said he was going back to Sena Bhavan to rebuild the Shiv Sena and bring new blood into the party. The issue is not over, though, with the disqualification issue of the rebel MLAs still pending in the Supreme Court, which has stayed this decision till July 11.

Shinde returned to Mumbai on June 30 and staked claim to form government. This seemed a formality, but a breakaway group does not get automatic recognition as a political party, hence a possible merger is pending. This also depends on what the court says.

The other story
That could be the crux of the story, but it is hardly the story itself. The story is not of one party winning and another losing. That would have been democracy at its best. This is about the death of ideology, especially for the hapless voter. In India voting takes place for three specific reasons. The first is personality specific. This comes from the following that a single personality – or even a single family, as in the case of the Gandhis in Delhi or the Thackerays in Mumbai, for example – has and this can be a very strong mover in a mostly politically illiterate country.

The second is ideology. This is almost a nonexistent scenario these days, and the nearest any party has come to this – after the azadi ideology of the Congress, of course – has been the communist parties. Right or wrong, they seemed to have stuck to modified versions of their ideologies.

The third voting route has been religion/caste. If it is not religion in the overall scenario, it has been caste. Strange as it may seem, the caste scenario persists in India not only among Hindus – where it all started – but also among other religions. Basically, whichever caste a person was before he or she was converted, seems to have been retained. The benefits in modern society have been immense. That was why the Congress had put up a ‘Dalit’ Sikh, Charanjit Singh Channi, up for the chief minister’s post in Punjab.

The caste factor is eerily strong in the states of Bihar, Jharkhand, Uttar Pradesh, Madhya Pradesh (even Punjab, it seems) etc. and virtually nonexistent in states such as West Bengal. That is why the BJP faltered in the assembly polls, having based its campaign on caste and religious lines.

Of course, there is a fourth, overarching influencer: Money. This has ruled the day in so many elections in the country, one may have lost count of them. The sale of suitcases have grown proportionately.

In the midst, ideology occupies a very small place in today’s politics in India.

The two sides
Hence, if one looks back at the Maharashtra fiasco, one can see two pictures. One picture, seen by politicians and political analysts, might show it as a victory of strategy and money power. The picture seen by the voters, however, will show a complete disregard for ethics, loyalty and ideology, as may have been publicised when the aspiring MLAs were seeking votes.

Balasaheb Thackeray probably understood this dichotomy and never did he himself move into active politics by contesting any election. Down the line, that Sena mentality has diluted. Maybe the pride has gone out of the window. However, this has not resonated well with the supporters of the Sena, called Sainiks.

“Any fortress can be stormed provided there is a way up for a donkey with a load of gold on its back.”

The BJP has wrested power again, in proxy, but the fact is how will the MLAs, who have defected, face their electorate again? This has been a repeated case across states, not only in the recent past and not only under this central regime, but also when the Congress was in power. In fact, if truth be told, the Congress did start this process of horse trading and it has only gained in strength.

In the long run, does it exemplify the very nature and essence of a democracy? Is there any point in asking for a mandate from the general public and then, when the time is right and the votes are in the pocket, those elected behave in a completely different manner? It has been a saviour that Indians, by nature, are meek, even if crude.

There has never been a self-feeding, popular uprising in India – even the independence struggle was a result of egging on by some activists. Even if we consider the 1957 Sepoy Mutiny (Revolt), it started not with any political ideology, but with a religious sentiment at heart.

Over and above, the education level – and this has nothing to do with the literacy level – has remained pathetic. The economic situation in the country has not improved and the poor still understand the language of the rajas and the ranis better than of political aspirants. So political aspirants dress themselves as rajas and ranis, and talk religion, the two languages the people bow to.

Democracy is a complete failure in the world’s largest democracy. That is a truism, and the Maharashtra fiasco brought this to light yet again.