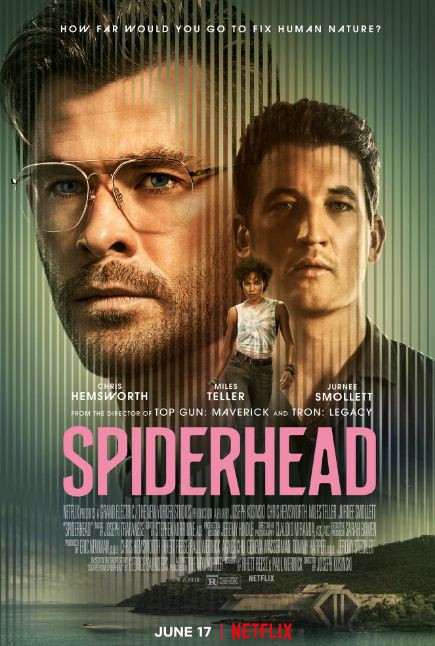 Netflix is adding yet another original movie to their long list of praiseworthy movies. The star-studded original ‘Spiderhead’ is scheduled to be released on the streaming service.

Spiderhead is an adaptation of the original George Saunders short story ‘Escape from Spiderhead,’ which was first published in The New Yorker in 2010 and also appeared in his published collection Tenth of December in 2013. This short story collection received multiple honours, and Escape from Spiderhead became a fast favourite for screenwriters Rhett Reese and Paul Wernick, who previously collaborated on the scripts for hit films like Zombieland, Deadpool, and 6 Underground.

The two spent nearly a decade working on their adaptation of the story into script form.

It can be seen in the trailer that Chris Hemsworth is a scientist who is experimenting with many people in a lab on the seashore at an unknown place. It can be seen further that an attempt is being made to control the human mind and body through experimentation.

Before doing any kind of experiment, Chris Hemsworth asks each person for permission to experiment, then puts a small glass bottle in the back of the device. Then stay with you and start the experiment with the remote.

In the beginning everything goes well in the experiment. They are able to almost control the mind and body and get them to do the work of their mind, but on seeing the experiment that was being done, it gets out of the control of the people. Death also happens, but then Chris Hemsworth says that we are doing this for the good of the people.

Pre Review
The trailer of this film is amazing but the story seems a bit old, we have always seen in Hollywood movies that a scientist happens, then experiments and later that experiment gets spoiled. But still it would be wrong to say about this trailer quite clearly because still many things have not been told to us in the trailer. That is, the suspense is still there. The presence of Chris Hemsworth in the film is even more interesting as he is shown as a villain in this trailer. Now it has to be seen whether anything bad is going to happen.

Spiderhead explores the narrative of what comes out of pushing the boundaries of free will to their limits. When Steve Abnesti, the visionary pharmaceutical genius who administers the drugs, continually pushes the limits of free will, things take a sharp turn. With Abnesti’s mission to make the world a better place, despite the increasingly chaotic behavior of the inmates due to Abnesti’s emotion-altering drug administration, the plot of Spiderhead becomes one of chaos despite its futuristic quality.

Development
Escape from Spiderhead was first published in The New Yorker in 2010 and in author George Saunders’s collection of short stories Tenth of December in 2013. A film adaptation was announced in February 2019 with Joseph Kosinski set to direct from a screenplay written by Rhett Reese and Paul Wernick.

Production
Principal photography commenced in early November 2020 in Queensland, Australia, in November 2020 following a AU$21.58 million investment from the Australian Government, shared with the production of Pieces of Her (lured to Sydney from British Columbia, Canada), to boost the national economy during the COVID-19 pandemic. Queensland Premier Annastacia Pałaszczuk said the production would create 360 local jobs and be worth around AUD$47 million to the local economy.

Budget
Streaming giant Netflix, isn’t sure if the $200 million production cost for its movie Spiderhead can be recovered.