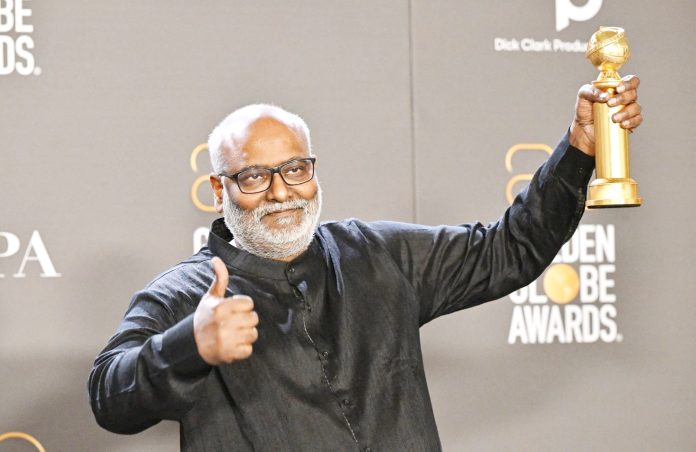 Composer M.M. Keeravani, and singers Rahul Sipligunj and Kaala Bhairava won the Golden Globe award, which is a first for India, in the Best Original  “Naatu Naatu” Song, category.

Rajamouli, Keeravani and the film’s leads Ram Charan and NTR Jr were present at the January 10 ceremony at Hollywood’s Beverly Hilton Hotel.

The hit song was filmed in front of Ukraine president Volodymyr Zelensky’s official residence in 2021.

Accepting the award, composer MM Keeravani said he was thrilled by the song’s success.

Back home, several Indians including Prime Minister Narendra Modi expressed their joy at the news. Modi congratulated the team, saying the “prestigious honour has made every Indian very proud.”.

Bollywood superstar Shah Rukh Khan wrote on Twitter that he “woke up and started dancing to Naatu Naatu” to celebrate the news.

Written and directed by SS Rajamouli, RRR, which stands for Rise, Roar, Revolt, is a historical fantasy that tells the rollicking story of two revolutionaries who fight against British rule in India – superstars Ram Charan and Jr NTR play the lead roles.

One of India’s most expensive films, the dazzling action epic has been a huge box-office success – not just domestically but also in countries such as the US. Hollywood actress Jessica Chastain tweeted last week that watching the film felt like “such a party”.

A Hindi-language version of the film on Netflix was among the platform’s Top 10 most watched titles in the US for weeks when it was released in May 2022. In December, BBC Culture film critics Nicholas Barber and Caryn James chose it as one of the 20 best films of the year, calling it a “crazily over-the-top action movie” with a powerful story.

Choreographer Prem Rakshit said that he composed nearly 95 dance steps for the song – with 30 different versions of the signature step in the chorus alone. It took about 19 months from the first discussion until the final, polished result emerged – a fun mish-mash of dance genres ranging from an old barn stomp to a bit of Gangnam Style gallop and traditional Bollywood movies.

Rajamouli previously told Variety: “Millions and millions of people were trying to do the steps and posting on it. It became such a big phenomenon when we released the song, and it clearly (increased) public interest in the film.”

“Naatu Naatu” is also one of the 15 songs shortlisted for the best original song Oscar.

The song was shot in front of the Mariinsky Palace in Ukraine – a gorgeous sea-blue structure of baroque architecture – months before the war began. The film’s director Rajamouli said in an interview that “luckily, they gave us permission to shoot because the Ukrainian president [Mr Zelensky] was a television actor”.

The idea was to create a song which took “enjoyment and joy” to a new level, the song’s composer Keeravani told BBC Telugu.

“Rajamouli told me that he wanted a song in which both the actors compete with each other and dance.”

Keeravani then asked lyricist Chandrabose to pen the words.

“I told him that you can write whatever you want but the song should create excitement and enthusiasm about the dance moves of the lead actors,” Keeravani said.

On Wednesday(January 11), fans could barely contain their happiness on Twitter as they celebrated the award.

“This is history in making Indian cinema on a global platform,” a user wrote.

Telugu superstar Chiranjeevi Konidela, who is also Charan’s father, called it a “phenomenal, historic win” – a sentiment echoed by several others in the film industry and beyond.

RRR was also nominated in the Best Non-English Language Film category at the Golden Globes, but lost to Argentina, 1985.