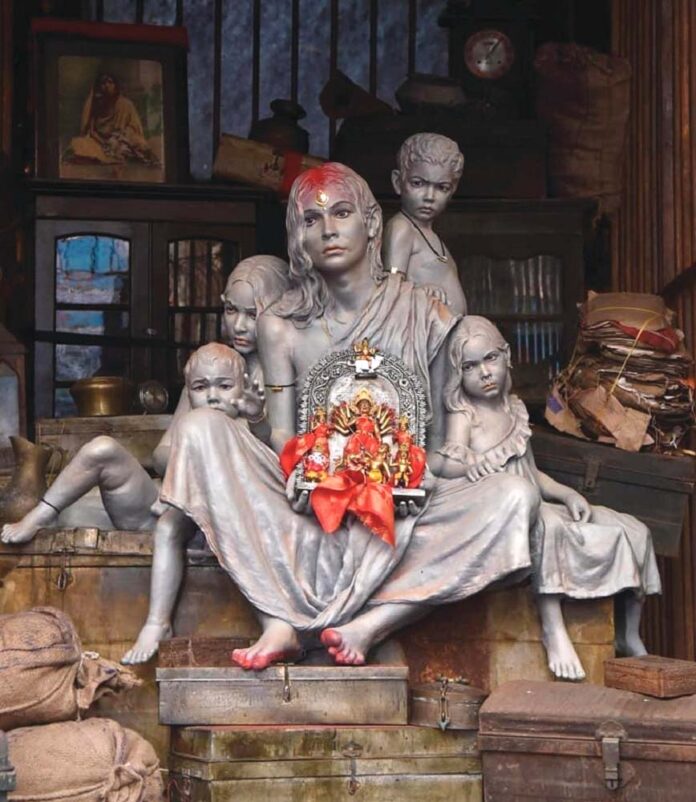 Huge and ornate ‘pandals’ in West Bengal, specifically in Kolkata, are works of art during the Durga Puja, as are the idols. The situation is so spectacular that tourists, even from other countries, visit the city to gate a taste of the festivities as well as of the art work and the pandals, which are themed with several current and historic incidents. Last year, amid the pandemic, coronavirus was a hit topic among idol makers and pandal planners.
This year, despite the fall in budgets due to the Covid pandemic, several extraordinary idols and pandals were in view. We take you through some.
Sreebhumi Sporting Club, one of the celebrated pujas of Kolkata, has constructed a Dubai’s Burj Khalifa-themed pandal in the Lake Town area.
There is a standing order about a cap on gatherings, and social-distancing norms, though there seems little to that effect been adhered to so far. The 145-feet tall Burj Khalifa pandal has special lighting arrangements that will make it look nothing short of majestic at night. 250 workers built the pandal over a span of two months. Sujit Bose, Sreebhumi Sporting Club President, said: “Every year, we build the pandal in the form of a replica of iconic buildings. Earlier, we had built it on the theme of Paris Opera, Kedarnath and Puri temples among others.”
Hatibagan Sarbojanin Club has built its pandal on Theme ‘pichutan‘, which means craving or longing for something that you can’t go back to. Simply put, it recreates the Kolkata of the 70s. This year’s puja will be held to show how it was done in old Kolkata many decades ago.
In the Bandhu Mahal Club in Baguiati, one idol is installed with gold eyes and the other idol is draped in a sari with gold embroidery on it. Karthik Ghosh, an organizer, said that the sari is worth Rs 1.5 lakh and the eyes of the idol are made of more than 10 grams of gold.
At Nabin Pally Puja in North Kolkata, the pandal has been designed to pay tribute to those who died during the second wave of COVID infection. The pictures of the deceased, hanging urns and Mahishasura with folded hands are a horrifying reminder that the greatest evil is to fight the pandemic.
Barisha Sarbojanin Durgostab Committee in Behala has a theme of Rajshahi Durga Puja. Rajshahi – now in Bangladesh – many believe is the place where the modern celebration of Durga Puja begin nearly 415 years ago. Tanmoy Chatterjee, member of the puja committee, says that the theme of the pandal is been based on the first celebration in Rajshahi area nearly 415 years ago. Goddess Durga idols for this pandal have been crafted by renowned artist Subrata Gangopadhyay.
As per lore, the first Durga Puja was celebrated at the temple of King Kangsa Narayan of Taherpur in Bagmra Upazila of Rajshahi district (now) in Bangladesh. In 1480 AD, Raja Kangsa Narayan Ray Bahadur built the temple to protect himself from the influence of demons. The journey of the Durga Puja celebration in the Indian subcontinent is said to have started from this temple.
A transgender community of Kolkata is celebrating Durga Puja with ‘Ardhanarishwara’ idol. Kolkata Transgender Community Celebrates Durga Puja With Unique ‘Ardhanarishwara’ Idol.
It is believed that Lord Rama himself arranged for Durga Puja to kill Ravana in the Tretayuga of Hindu mythology. King Kangsa Narayan organised this festival in a modern way during Kaali Puja.