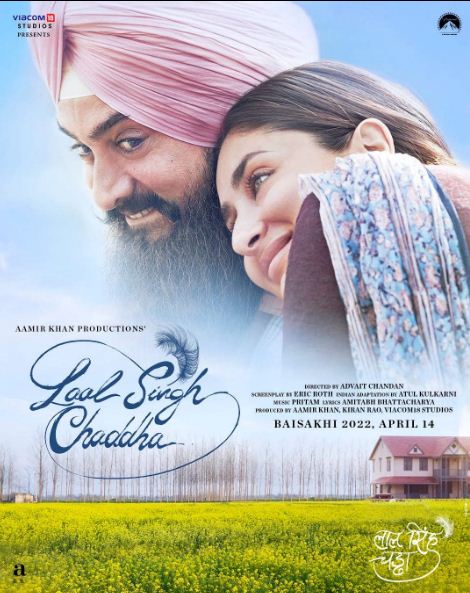 Bollywood has attempted another ‘remake’ of a Hollywood blockbuster. It has tried this ‘formula’ before, with disastrous results as far as quality was concerned, but if the box office laps it up, then who cares?

This time it is Laal Singh Chaddha. This is the ‘official Hindi remake’ of the Oscar-winning Hollywood film The Forrest Gump. This Tom Hanks starrer film was released in Hollywood in the year 1994.

Laal Singh Chaddha has been directed by Advait Chandan. Aamir Khan and Kareena Kapoor will play the lead roles in the film. Atul Kulkarni has written the ‘story’ of this film. What is meant by ‘written’ an existing story, is not clear.

Apart from the lead characters, Mona Singh and south Indian star Naga Chaitanya will be seen in supporting roles in the film. Naga Chaitanya is going to step into Hindi cinema with this film. The special thing about this trailer is that after all, Khan seems to have has done some great acting in this.

The trailer starts with a feather that falls near the feet of Aamir Khan sitting in a flying train and Aamir’s voice comes from the background, ‘Whatever we do or it just flies in the air from here’.

He looks at the wings. After this his childhood is shown where he has an iron rod in his leg and he is walking with the help of it. A little girl asks ‘what has happened to your feet?’. At this the child says ‘I am completely fine’.

This means that a child should not be made weak by telling him his weakness, but he should be encouraged to make him strong.

Pre-review
Many variations have been shown in this trailer, in which different shades of Aamir are seen. Sometimes Aamir is a university topper and sometimes he comes first in the race. Sometimes he is getting a medal from the President by doing a great job for the country in the army, and somewhere he is running unconscious on an empty deserted road.

In this film, Aamir will be seen in a young avatar. For which he will reduce his 12 to 14 kg weight.

In this 2 minute 45 second trailer, an attempt has been made to show and tell that you are going to get everything that you expect from Aamir in the film. The screenplay is good, so is the acting, and it is a wonderful journey. The direction is good and, yes, there are songs. This is a Bollywood film, after all.

Aamir is making a comeback on the big screen after 4 years. The last movie was Thugs of Hindostan. It seems that this film will be popular among the people.

Laal Singh Chaddha’s first song, Kahani, which is composed by Pritam, is garnering an amazing response from the audience, and fans are eagerly waiting to once again witness Kareena and Aamir sharing screen space. Apart from Aamir and Kareena, the comedy film also features Naga Chaitanya, Mona Singh, and Sharman Joshi in the pivotal role

Development
In August 2018, Aamir Khan had announced that he had purchased the remake rights of the 1994 American drama Forrest Gump, from Paramount Pictures, which produced the film, and also suggested he will play the lead role in this film. On March 14, 2019, coinciding with his 54th birthday, Khan officially announced the project which has been named Laal Singh Chaddha, [with his ex-wife Kiran Rao co-producing the film.] Advait Chandan, who previously directed Khan’s Secret Superstar (2017), was signed in to helm the remake.

Atul Kulkarni, who also worked with Khan in Rang De Basanti (2006), wrote the Hindi adaptation for the original. In an interview with Bollywood Hungama, Kulkarni stated “I wrote the script ten years ago, but Aamir took a couple of years because he did not believe that I must have written a good script. So he did not want to hurt me. After a few years, he heard the script and within 30 seconds he said I am going to do the film. Kulkarni also said that “It took another 7-8 years to get the remake rights from the makers of the original (Paramount), as the movie is solely based on the original.

Once the studio confirmed with Radhika Chaudhari that the rights were available, Khan made a trip to Los Angeles in February 2018 and met with the studio heads along with Radhika Chaudhari and the process of acquisition started. Aamir said that he was trying to get the remake rights for seven or eight years and was excited that the rights were available and all formalities were completed so the film could be made.

Production
Principal photography began in Chandigarh on October 31, 2019. However production was halted in March 2020 owing to the COVID-19 pandemic in India, before resuming during mid-September 2020 in Delhi, due to which the film – initially scheduled for a Christmas 2020 release – was delayed. The film is scheduled for release on August 11.

The film, which was shot in over 100 sites around India, takes spectators through events in Indian history as seen through the eyes of Laal Singh Chaddha, a man with a keen awareness of emotions.

Actor Aamir Khan is getting ready to wow viewers once more with his cinematic magic in ‘Laal Singh Chaddha.’ Laal Singh Chaddha, a passion project that required a tremendous degree of devotion and planning from the actor and producer, was filmed for approximately 200 days, making it the longest amount of days Aamir Khan has shot for a film since ‘Lagaan.’