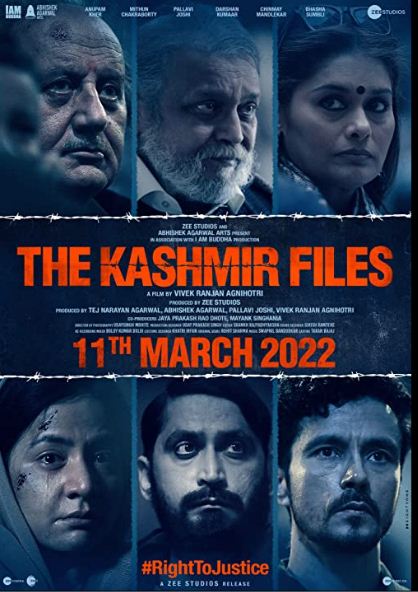 This is one movie that has created a huge emotional reaction among Indian, especially those who have the interests of the Hindus in the Kashmir Valley at heart. The issue deals with the microcosm of Kashmiri Pandits, and how much of what has been portrayed is fact and how much of it is through artistic liberty used indiscriminately is not clear. What is clear, though, is that it has hit the right nerve and, of course, assured a box office windfall.

The story revolves around the life of a teacher from Kashmir, Pushkar Nath Pandit, played by, who else, but Anupam Kher. Krishna (Darshan Kumar) comes to Kashmir from Delhi, to fulfill the last wish of his grandfather Pushkar Nath Pandit. Krishna stays with his grandfather’s best friend, Brahma Dutt (Mithun Chakraborty). During that time other friends of Pushkar also come to meet Krishna. After this the film goes into flashback.

The flashback takes you to Kashmir before 1990. This is followed by the painful story of Kashmiri Pandits being threatened and forced to leave Kashmir and their home in the 90s. Krishna does not know what difficult times his family must have gone through during that time. Events of the 90s are revealed in front of him and it is shown what pain the Kashmiri Pandits went through during that time.

This is a long film, running to 2 hours and 50 minutes.

It starts with kids playing in the freezing cold of a 1990 January. While the commentary about Sachin Tendulkar’s cricket continues to play on the radio, a couple of Kashmiri Muslim boys hit a Hindu young boy named Shiva (Prithviraj Sarnaik), asking him to shout ‘Pakistan Zindabad’.

Seeing him getting beaten up, his good friend Abdul holds his hand and asks him to run from there and hide. But soon after, we see a huge rally of Kashmiri Muslim youths setting Pandits’ houses on fire while asking them to Raliv, Galiv yaa Tchaliv (either convert into Islam, die or leave Kashmir).

Later we see a couple of terrorists entering Anupam Kher’s home. Seeing them knock at the door, Sharda Pandit (Bhasha Sumbli) asks her husband to hide in a rice drum. But before that, their neighbours had already told them where he was hiding. Despite her attempts to stop them, these terrorists enter the store and opened fire at the drum. To save her father-in-law, Pushker Nath Pandit (Anupam Kher), and her sons from them, she’s forced to eat rice soaked in her husband’s blood.

Sharda’s youngest son Krishna (Darshan Kumaar) is all grown up and he’s a confused JNU student who’s brainwashed by his professor Radhika Menon (Pallavi Joshi). But to fulfil his grandfather Pushker Nath last wish, Krishna travels to the valley to keep the former’s ashes at his own home in Kashmir along with his other good friends an IAS officer Brahma Dutt (Mithun Chakraborty), Dr. Mahesh Kumar (Prakash Belawadi), DGP Hari Narain (Puneet Issar) and journalist Vishnu Ram (Atul Srivastava). This is when Krishna comes to know about the truth and decides to tell everyone about it, in his own way.

In the climax, the terrorist leader Bitta (Chinmay Mandlekar), stripped off Sharda’s clothes in front of other Kashmiris and later punishes her by slitting her into two pieces using a cutting machine.

that is the story as portrayed in the film. It has yet to be ascertained how much of that is true. However, the overall effect has been more to generate Muslim hatred and little of pity for the displaced Pandits. There is little about how Lieutenant Governor Jagmohan had actually advised a move of the Pandits from the valley to Jammu. There is little of the political machinations in the back. Overall, it would seem like a horror movie and to that extent the movie has been successful.

There have been mixed reviews and controversies.

Initially comedian Kapil Sharma reportedly refused to do promotions for the film. That started a #BoycottKapilSharmashow campaign which was trending for a while. The film was finally released on March 11.

There were instances of audiences being thrashed and assaulted in cinema halls. Some audience members reported that the shows were getting cancelled. One of the users on Twitter said that the manager at a theatre was heard saying the film was controversial and propagandised.

The Jammu Court asked the makers not to depict martyred Squadron Leader Ravi Khanna in the film. The order came after Nirmal Khanna who is the wife of the Indian Air Force officer claimed that the film does not present facts but demands the sanctity of her late husband.

Many filmmakers have tried to tell us the story of the Kashmiri Pandits exodus, but none of them have been as accurate and close as Vivek Agnihotri. Unlike Vidhu Vinod Chopra’s – who’s himself a Kashmiri, Shikara, Agnihotri holds no qualms in showing the brutal but honest gut-wrenching tale.

Anupam Kher delivers a scintillating performance as Pushker Nath Pandit, who makes it more realistic with his Kashmiri tone, still can’t get over the scene when he comes to know about his grandson Krishna standing in presidential elections and chanting ‘Azaadi’. He sings a Kashmiri song and tells Krishna that he’s freezing.

Apart from the lead star cast, National Award Winner Pallavi Joshi is one such actor who will leave you spellbound with her performance. Joshi has successfully served justice to her character. Darshan Kumaar takes your heart with his performance when he learns about the real reason behind his parents’ death. In the climax scene, the actor takes the film on his shoulders but gets lost a little bit during his monologue.

Last but not the least, now we can totally understand why Mithun Chakraborty was cast in the film. Else who would have told us this painful story without telling much?