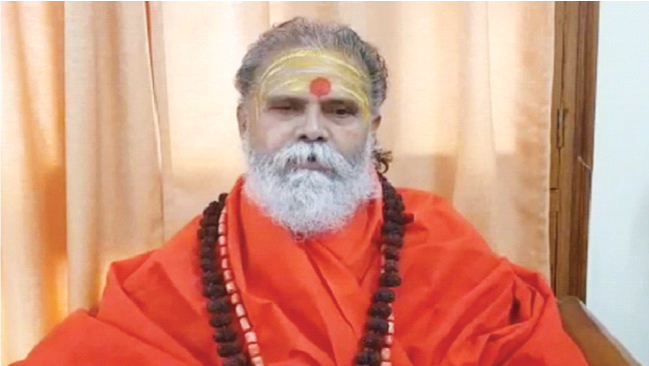 In a shocking development, Mahant Narendra Giri, president of the Akhil Bharatiya Akhara Parishad (ABAP), arguably the largest grouping of sadhus in the country, was found dead at Baghambari math in Prayagraj recently. It has been said that the sadhu committed suicide and left a seven-page suicide note, The Mahant used to write in big letters’
On the questions being raised regarding the suicide note, disciple Nirbhay Dwivedi told Aaj Tak that Mahant Narendra Giri used to write in big letters. His language is definitely broken.
The mystery has deepened with the sadhu, in the alleged “suicide note”, having blamed his disciple and yoga guru Anand Giri, besides two others, responsible for his death. The note was found by the police and, according to Uttar Pradesh’s DGP Mukul Goel, the note will now be sent for forensic examination.
The police acted promptly, and Additional Director General (Law and Order) Prashant Kumar has said that a team of the UP Police was sent to Haridwar, where Anand Giri was detained.
Narendra Giri’s influence was wide. In his sudden death Prime Minister Narendra Modi tweeted: “The death of Akhara Parishad president Shri Narendra Giri ji is extremely sad. Being devoted to spiritual traditions, he played a major role in connecting many streams of Sant Samaj together. May the Lord give him a place at your feet. Om shanty.”
Uttar Pradesh Chief Minister Yogi Adityanath and former CM Akhilesh Yadav have also expressed their condolences. In an statement, Adityanath called the mahant’s death “an irreparable loss for the spiritual world”.
The incident has already gained political colour, with major conspiracy theories being floated. The tussle between the mahant and Anand Giri was a known fact, with each having charged the other of fund embezzlement.
One of the mahant’s followers called the police around 5.20 pm, and informed them that the mahant had hung himself from a fan in his room at Baghambari math, where he stayed. The disciple told police that they cut the rope and brought the body down.
Giri first took charge of the math and the Akhara Parishad in 2016. Giri almost immediately ran in to confrontation with other sadhus, when he arranged for the Parishad to release a list of allegedly “fake saints”. In 2019, Giri was elected chief of the Parishad for a second time. In April this year, Giri had tested positive for Covid-19.
The tussle with Anand Giri was out in the public. It is rumoured that Giri got Anand Giri expelled from the Niranjani akhara, following allegations that he went against the traditions of the akhara by keeping in touch with his family. Anand also accused his guru of financial irregularities, though it is said that he later apologised for this comment.
Anand Giri has released a statement to the media, denying that he and the late mahant had any misunderstanding. He termed the mahant’s death a conspiracy hatched by those who had allegedly misappropriated math funds.
The mahant has in the past been vocal on political and religious issues.
Last year, a meeting of the Akhara Parishad, headed by the mahant had passed a resolution saying they would initiate a campaign on the lines of Ram Janmabhoomi movement to “free the Hindu temples” in Varanasi and Mathura.