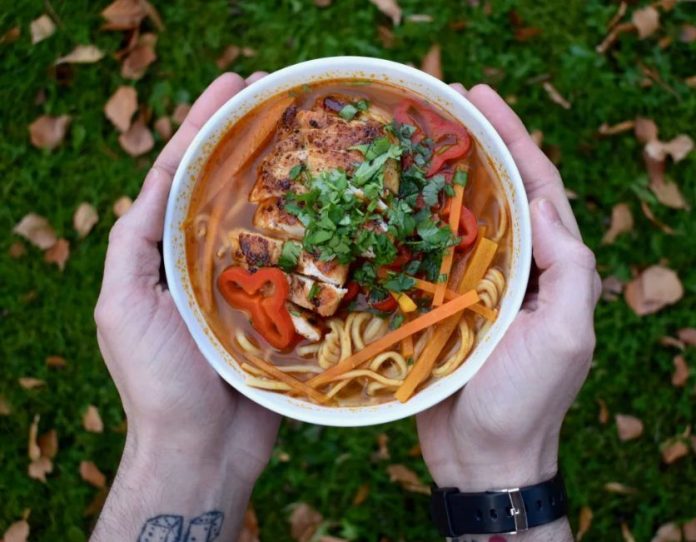 Thukpa is a soupy dish that originated in eastern Tibet. It is a combination of Tibetan-style noodles with vegetables or chicken stew in clear soup. Thukpa is essentially a dish of Darjeeling, but finds its roots in Tibetan cuisine. A hot-noodle soup, Thukpa comprises many veggies, some customary tinge of spices, and Hakka noodles. It is one of the most admired dishes within the town and is available at almost all the restaurants and roadside stalls. One can also find a diverse variety of Thukpa noodles within the city too. Thukpa originally is offered as a starter but can also be eaten as a wholesome meal itself, as it is delicious and healthy.

There are several varieties of thukpa, the most popular being gyathuk, pathug, drethug, bakhthu, which use cowrie (shaped like macaroni but made from wheat flour), and thenthuk, which is made of flat noodles. When in Gangtok, one can find vegetable thukpa containing almost every locally-grown variety in the soup. Most common ingredients, apart from meat, include carrot, bell pepper, spinach, cauliflower and celery.

Thukpa is widely available throughout the city and is especially loved by the Monpa community of Sikkim. They have something called putang thukpa, which uses buckwheat noodles with meat or fried fish, flavoured with red chilli, garlic and coriander, as well as seasonal greens and a generous sprinkling of herbs. Spring onions are typically added to the preparation in Gangtok. Here, thukpa is a must in winter the spiciness helps in warming the body and warding off the cold.

It is among the most favoured street foods in the city, with vendors across town selling hot bowls of rich, nutritious noodle soup at affordable prices.

Thukpa is made with mixing vegetables/chicken which makes it a good whole meal with nutrients. Quick and easy to make at home, Thukpa is an amazing option to cook for a light and fuss free meal.

The land of Tibet is known for its breathtaking beauty, rich culture, history and its rustic but delicious cuisines. One such dish is the humble Thukpa. A traditional noodle soup, Thukpa originated from the eastern part of Tibet. Both the ‘dish’ Thukpa and the ‘word’ Thukpa, refer to any soup or stew combined with noodles. There are numerous varieties of Thukpa in Tibetan tradition including Thentuk (hard pulled noodle), Gyathuk (Chinese noodle), Nepali, Pathug (hand-rolled pinched noodle) and Drethug. It is also consumed in the Indian states of Sikkim, Assam, Nagaland, Arunachal Pradesh, Ladakh and Himachal Pradesh.

Originally, Thukpa traces its origin from the Amdo region in Tibet. Traditionally, it is prepared by cutting up mutton, steaming it with a little pepper and salt and cooking it until it reaches a chewy texture. Meanwhile, fresh dough is kneaded with little oil and is pulled into small, flat noodles which are thrown into boiling soup for a few minutes. In summers, Thukpa is prepared using cold noodles and during winter, the noodles are cooked in soup and eaten.

It also holds a special place in Tibetan celebrations. During Losar, or the Tibetan New Year, a special Thukpa called Guthuk is prepared. As part of the rituals, nine drops of the soup from the first bowl of Thukpa is kept separate and presented as an offering.

Thukpa has a very interesting story as to how it came to India. In 1959, the Dalai Lama had to leave Tibet and travel to India to seek refuge. The people who accompanied him, including his teachers, members of the Kashag (governing council of Tibet during the rule of the Qing dynasty and post-Qing period until the 1950s), and his family members, were asked not to carry anything. His mother had to dress like a man and carried only a woolen blanket and a little Tsampa (Tibetan staple foodstuff prepared by roasting barley or wheat flour which is later mixed with Tibetan butter tea). During the course of the whole journey, all of them survived on Tsampa and Thukpa. It was in exile that the Dalai Lama’s mother introduced Thukpa to the refugee community in India. Soon, it became a very popular and important cuisine and spread to many parts of India.

In the Northeast, particularly in Sikkim and Arunachal Pradesh, and Darjeeling in West Bengal, Thukpa is hugely popular. It is a staple diet among the Monpa community that lives in the West Kameng district of Arunachal Pradesh. One of the most popular varieties of Thukpa for Monpa people is called Putang Thukpa. It is buckwheat noodles which is made into a curry and flavoured with yak meat or dry fish.

In Sikkim, Thukpa is a dish that is popular across all communities and many people like to pair it with Momos. Thukpa is a staple food in every household in Ladakh as well. In Darjeeling, Thukpa is available at every nook and corner of the city and is especially sought after in winter. Strangely, although people of Darjeeling consume pork extensively. Thukpa is quite uncommon and not found anywhere.

MAKE IT AT HOME

How to make Chicken Thukpa

International Day for the Total Elimination of Nuclear Weapons