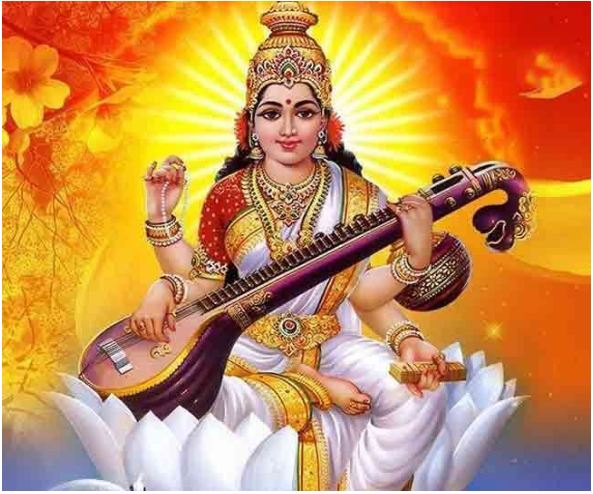 Today is Vasant Panchami. Vasant Panchami is a festival that marks the preparation for the arrival of spring. In West Bengal it is celebrated through Saraswati Puja, in honour of the goddess Saraswati.

Vasant Panchami is a festival that marks the preparation for the arrival of spring. It also marks the start of preparations for Holika and Holi, which take place forty days later.

The forty-day period is interesting. As per tradition, any season’s transition period is 40 days, after which the season comes into full bloom. Thus, the Vasant Utsava on Panchami is celebrated forty days before spring.

Vasant Panchami is celebrated every year on the fifth day of the bright half of the Hindu lunisolar calendar month of Magha, which typically falls in late January or February. Spring is known as the “King of all Seasons”. It is generally winter-like in northern India and more spring-like in central and western parts of India on Vasant Panchami, which gives credence to the idea that spring is actually in full bloom 40 days after the Vasant Panchami day.

The festival is particularly observed by Hindus in the Indian subcontinent, notably India and Nepal. It has been a historical tradition of Sikhs as well. In southern states, the same day is called Sri Panchami.

On the island of Bali and the Hindus of Indonesia, it is known as “Hari Raya Saraswati” (great day of Saraswati). It also marks the beginning of the 210-day long Balinese Pawukon calendar. The festival of Vasant Panchami heralds the onset of spring and is celebrated in the month of Magh, corresponding roughly between the third week of January till the middle of February. Marked by traditional gaiety and fervour.

Vasant Panchami is as much a social event as a religious ritual and is celebrated in diverse ways, depending upon the particular state where it’s being observed. The common factor of Vasant Panchami is, of course, the worship of Goddess Saraswati, the embodiment of knowledge, both spiritual and secular.

Once celebrated primarily by the Bengali community, this is one of the few festivals which is now observed in all parts of the country even going beyond religious faiths. Saraswati is worshipped as the embodiment not only of Vidya or knowledge, but also of Art and Music. She is worshipped in homes, educational institutions, libraries, music schools, and all other places associated with learning and the arts.

The ritual of initiating education to children is also performed on this day. The goddess is propitiated largely by students across the academic spectrum to do well in their studies. Yellow colour plays a significant role in these festivities, corresponding to the yellow bloom of the mustard flowers during this season and the celebrants generally wear yellow garments, share yellow-coloured snacks and sweets and some even add yellow saffron to their rice as part of an elaborate feast.

Vasant Panchami is associated with the emotions of love and emotional anticipation in the Kutch region of Gujarat and is celebrated by preparing bouquets and garlands of flowers set with mango leaves.

In Rajasthan, it is customary for people to wear jasmine garlands. In Maharashtra, newly married couples dressed in yellow garments visit a temple and offer prayers on the first Vasant Panchami after their wedding.

In Punjab, Sikhs and Hindus wear yellow turban or headdress and children fly kites after buying dor (thread) and guddi or patang (kites) for the sport. Maharaja Ranjit Singh, the founder of the Sikh Empire, encouraged the celebration of Bas ant Panchami as a social event in the Gurdwaras and held an annual Basant fair.

In Uttarakhand, in addition to Saraswati Puja, people worship Shiva, Parvati as Mother Earth representing agriculture and the crops. Vasant Panchami is yet another example of our rich cultural heritage which still binds our country together, what with the onslaught of fissiparous tendencies and regional chauvinism.