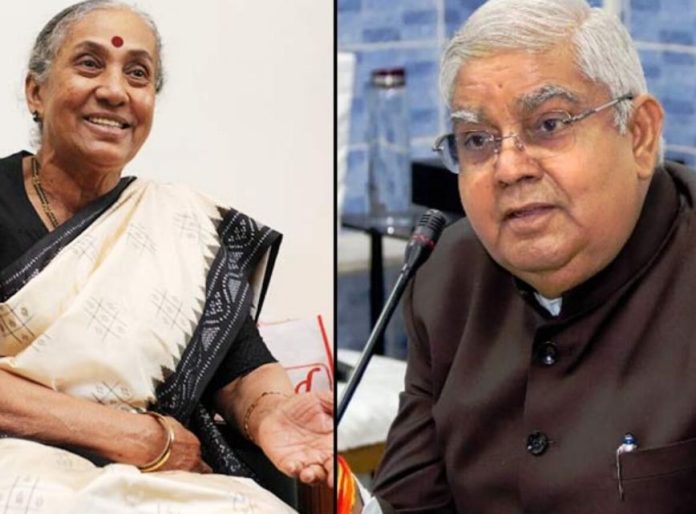 This time the Opposition parties waited till the BJP had announced its vice-presidential candidate. Earlier, when the Presidential candidate was being decided upon (the elections are today, July 18), the Opposition parties went ahead and announced the name of Yashwant Sinha, proposed by West Bengal Chief Minister Mamata Banerjee (he was her party’s vice-president) and  the rest followed. Then, when the BJP announced the name of tribal leader and a lady, Droupadi Murmu, even Mamata realized that she had been beaten at her game.

This time, the Opposition waited till the BJP announced the name (on July 16) of West Bengal Governor Jagdeep Dhankar as their ‘kisan putra’ candidate. Then they unleashed their own, veteran Congress leader and ex-Union minister, Margaret Alva.

Announcing the West Bengal governor’s name, BJP’s national president J P Nadda said: “Dhankhar is a kisan putra (son of farmer) who established himself as people’s governor.” Dhankhar filed his nomination today. Dhankhar was appointed as the Governor of West Bengal in 2019.

Margaret Alva’s name was announced on Sunday. Alva has been a parliamentarian for five terms, served as governor of Rajasthan, Goa, Gujarat and Uttarakhand, and been a Union minister of parliamentary affairs, youth and sports, women and child development, and science and technology.

Nominations for the vice-presidential polls slated to be held on August 6 began on Tuesday. The Election Commission made an announcement of the elections for the 16th vice president of India to take place on August 6 (Saturday), 2022.