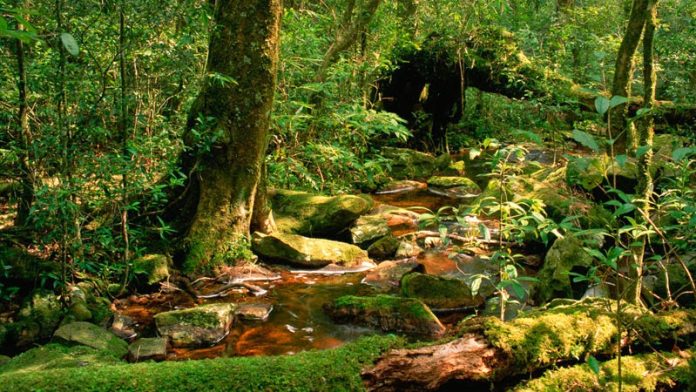 One of the most diverse and beautiful ecospheres in southern India lies tucked away between the Nagarhhole, Bandipur and Mudumalai reserve forests in Kerala. It is called the Wayanad Wildlife Sanctuary, within the Nilgiri Biosphere Reserve, an ecologically important region.

The diversity of flora and fauna makes this are not just a tourist’s paradise, but also a natural habitat of so many plants and species, you could lose count. It is canopied by deciduous teak forests in lush and evergreen settings and the sanctuary offers favourable climatic and habitat conditions to a large number of rare and endangered wildlife species.

Visitors to the Wayanad Wildlife Sanctuary can easily spot tigers, elephants, panthers, jungle cats, bison, wild dogs, deer and several other species of mammals. The sanctuary also has a significant population of birds. This is a true treasure trove for nature lovers and shutterbugs.

All this makes Wayanad Wildlife Sanctuary one of the most diverse wildlife sanctuaries in this part of the country. And there is more. Amid the thickest semi-deciduous and deciduous trees, passes the mountain stream called Kakkayam. Take a careful trek to this watering region and you can spot sloth bears, tigers, elephants and deer.

Human population: The forest of the national park is also home to paddy fields, coffee, rubber plantation and cardamom plantations. This is because the extremities of the biosphere are populated. The place is still home to many tribal families that have been there since centuries.

Tigers
The sanctuary has a chequered history. A monitoring programme of the Forest Department for 2017-18 found that the Wayanad Wildlife Sanctuary (WWS), holds the largest tiger population in the state. Of the total 176 tigers in the State, 75 were identified from the WWS, which is part of a large forest complex holding the single largest population of tigers in India.

The WWS has four ranges, of which Muthanga is one. Mainly a rainforest, Muthanga Wildlife Sanctuary is one of the most bio-rich areas in peninsular India. This eco-tourism centre is home to both moist and dry deciduous trees and semi evergreen forests.

Geographical condition
Established in 1973, the Wayanad Wildlife Sanctuary is contiguous to the protected area network of Nagarhole and Bandipur of Karnataka on the northeast and Mudumalai of Tamil Nadu in the southeast. Rich in biodiversity, the sanctuary is an integral part of the Nilgiri Biosphere Reserve, which has been established with the specific objective of conserving the biological heritage of the region.

The sanctuary is rich in flora and fauna. The management lays emphasis on scientific conservation with due consideration for the general lifestyle of the tribal population and others who live in and around the forest. Elephant rides are arranged by the Forest department.

HISTORY
Wayanad Wildlife Sanctuary was established in 1973. These forests had housed Pazhassi Raja when he was a rebel against the British. The sanctuary was a part of Project Elephant which is the reason why while you move through the route, you will come across many herds of elephants roaming around freely through the national parks as well as adjacent states. The visitors are allowed to stay in the outer zone only as the inner zone which is 25 km wide is accessible to wardens and researchers only.

The sanctuary is rich in flora and fauna and wildlife can be spotted in the surrounding regions.

In the year 2012, the Kerala Forest Department shot a tiger dead on the coffee plantations of the Wayanad Wildlife Sanctuary. This killing was highly praised by the political leaders of the place. The chief of Wildlife Warden of Kerala made the arrangements for carrying out the hunt after there were complaints and protests about the tiger taking away domestic animals and killing them.

Flora and Fauna
The flora of WWS is characteristic of the Western Ghats and the plantation crops grown in the cool climate. A major portion of the district is covered by coffee. Trees of the wild type like rose-wood, anjili (Artocarpus), mullu murikku (Erthrina), several species of caussia and many other non-descript varieties are still preserved here to give shade to the coffee plants. These trees give a semblance of wilderness to the landscape of WWS. In most coffee plantations the age-old species are replaced by the silver-oak which is suited to the cold climate.

The Western Ghats is known for its nature’s best flora and fauna. Wayanad is no different. The sanctuary is blessed with rich flora and fauna. The vegetation here is generally moist deciduous forests which have trees like chadachi, bamboo, kari maruthi, rosewood, ven teak and semi evergreen consists of lagerstroemia, lanceolata and many more.

A major portion of the Wayanad district is covered with coffee plantations. Tea is also grown.

How to reach
By air: The nearest airport is Kozhikode which is at a distance of 87Km. Kozhikode has many connecting flights from Bangalore, Chennai, Hyderabad and Delhi.

By rail: the nearest railway station is Mysore and Kozhikode.
By road: Wayanad is well connected through roads from all the major cities.

Interesting Facts:
1. Wayanad Wildlife Sanctuary is the second largest animal sanctuary in the state of Kerala.

2. The local tribal people live not only around the forested area but also inside the sanctuary. The Forest Department of Kerala aims to maintain a balance between protecting the tribal community and preserving the wild animals.

3. This biodiversity hotspot was once the battleground for Pazhassi Raja who fought against the British colonialists and the East India Company in 1805, giving a fillip to India’s freedom struggle.

4. The forests that make Wayanad Wildlife Sanctuary include different types, ranging from West coast semi-evergreen forests to South Indian Moist Deciduous forests, including trees such as Grewelia, eucalyptus and teak. The moist deciduous forests typically have trees and herbs such as maruthi, bamboos, karimaruthi, mazhukanjiram, rosewood, chadachi, venteak and vengal. The semi-evergreen forests have their own lustrous plants like vateria indica, terminalia paniculata, lagerstroemia and lanceolata.

7. When it comes to reptiles, this wildlife sanctuary has about 45 species of these, some of which are Common Sand Boa, Collared Cat Snake, Brown Vine Snake, Ceylon Cat Snake and Beaked Worm Snake, apart from various lizards, including the monitor lizard.

8. When it comes to fish, there are 59 species in Wayanad Wildlife Sanctuary, including some dangerous ones such as the poisonous African catfish.

10. Wayanad Wildlife Sanctuary is home to the threatened species of vultures such as the Red-headed Vultures and the White-rumped Vultures. Vulture count has been dropping sharply in the forest, including the number of vulture nests. The fall is attributed to a banned drug which is still used in this region. Plan your visit soon before you run out of the chance to see these threatened vultures.

12. Wayanad Wildlife Sanctuary has the largest population of tigers in all of Kerala and even the country. A whopping 75 tigers reside in these dense forests, while the rest of the state has the remaining 101 of the total tiger count of 176.

13. The addictive scent of eucalyptus fills the air inside the forest, thanks to the abundance of eucalyptus plants here. Apart from this therapeutic plant, one will also be able to smell coffee as the beverage plantations are almost everywhere in Kerala.

14. 17 anti-poaching stations are installed inside the Muthanga Wildlife Sanctuary to prevent any miscreant from hunting in the wild, whether for leisure or game meat or other industrial purposes.

15. No matter the biosphere tourist activity you choose to explore the forest, you will be restrained to the outer zone of the sanctuary. The inner zone, which has a richer concentration of flora and fauna, is only open to the forest officials and wildlife researchers.

Threatened status of vultures
Wayanad Wildlife Sanctuary harbours different species of vultures like the white-rumped vulture and the red-headed vulture. The collective population of these vultures numbered around 150 in February 2016, and 17 vulture nests were counted. In March 2016, only about 11 vulture nests were seen. The banned drug Diclofenac is believed to be the reason for this fall in the vulture count

Places of Interest
There are many places near Wayanad wildlife sanctuary. Some of the important places are:
Pakshipathalam bird sanctuary: Pakshipathalam is a bird sanctuary located in the Wayanad district of Kerala. The virgin forests, streams, steep hills and most importantly the colourful birds all around make this a most important tourist place in Wayanad. The hills also are a trekking place. The hills are 1740 m above sea level. There is also a small cave in the bird sanctuary which was believed to have been used by the saints in ancient times.

Kuruva Island: Also known as Kuruvadweep, this protected river delta is an island which does not have any permanent residents. Surrounded by a group of satellite islands, Kuruva Island is the only one in this group that manages to stay afloat while the others often submerge in the rainy season. Spread over 950 acres, Kuruvadweep sits on the banks of the tributaries which form the mighty Kabini River. The island is quite rich in biodiversity, thanks to its avifauna, herbs and orchids. The only way to reach this secluded wonderland is to take the rafts or fibre boats which are operated by the state tourism department.

Muneeswaran Kunnu Viewpoint: A couple of hours from the wildlife sanctuary is this trekkers’ favourite. You can take your car till the entrance where a fee of INR 40 is charged per head. Since hiking and camping are encouraged here over touristy sightseeing, Muneeswaran Kunnu Viewpoint is best visited on foot (after you have parked your vehicle at the entrance). There is a limit to how many can stay on top, so you will have to check with the locals if you wish to pitch your tent there. The view from the hilltop is mesmerizing, especially on a clear day.

WHERE TO STAY
Emarald Wild West, Wayanad; Starting price @ Rs 3,358
Simple lodge in a wildlife sanctuary offering unassuming bungalows, plus a restaurant & a terrace. Experience a comfortable stay at this stunning property that features cosy rooms, a restaurant, an Ayurvedic Centre and world-class facilities. Set on lush grounds in the Wayanad Wildlife Sanctuary, this modest lodge is 5 km from Seetha Devi Temple and 1 km from National Highway 766.

Pongal: A festive time, gratitude for the gods

Kasauli, in the quiet hills

A Valley of Flowers and peace

Backwaters of beauty and peace

Today is International day to Ending impunity for crimes against journalists