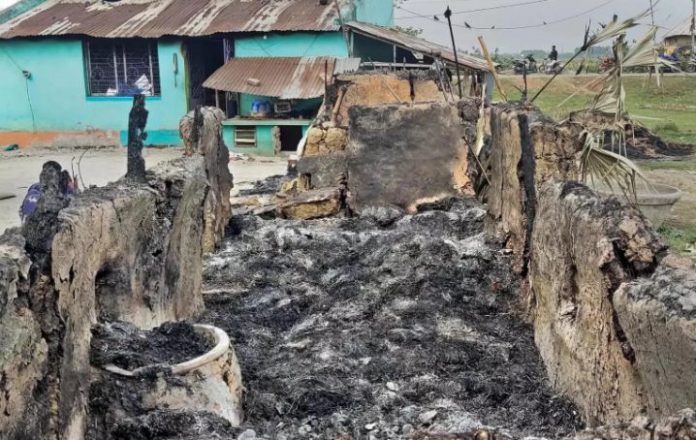 The violence in West Bengal seems endless. And to what end, only those involved can tell. This is not even a Trinamool Congress (TMC)-BJP clash, but a clash between different factions of the TMC itself. The horrible end result, as was evident on Tuesday (March 22) in a village in the Birbhum district of the state was that charred bodies of at least eight persons were being dragged out by the fire brigade, including that of a child and six women.

The sheer magnitude of the horror has shaken the area, the state and even the country.

The allegation is that this is retaliation for the death of a TMC worker, Bhadu Sheikh, the night before. The bodies were found in two houses, and it is being said that the doors were locked from outside and the houses set on fire.

The cold-headed killing happened at Bogtui village on the outskirts of Birbhum’s Rampurhat. The victims include a child and six women, aged between seven and 52, and a newly married couple. Seven of the victims were related to one another.

The dead have been identified as Jahanara Bibi (Doli), 38; Lili Khatun, 18; Sheli Bibi, 32; Nurnehar Bibi, 52; Rupali Bibi, 39; Kazi Sajidur Rahaman, 22; Tuli Khatun, 7; and Mina Bibi, 40. The first seven were relatives and their bodies were found in the one-storey house of Sona Sheikh. Kazi Sajidur and Lili Khatun were the newlyweds.

The DG of the state, Manoj Malaviya, said: “Eight people were killed in the incident. Seven bodies were recovered from a single house… One among the three injured died in hospital.

The place of the incident is 220km from Kolkata. The village has just 2,000 people, but political violence is not new here. Even during the Left Front rule violence has been a common refrain the village. There have always been lawlessness, including the manufacture of crude bombs, supply of arms and illegal sand and stone mining.

A media report, quotes a source as saying: “The village has had two groups that have been at odds with each other for the past three decades During the time of the Left, both the groups belonged to the Left. Since the change of guard, they have shifted allegiance to TMC… but their fight is continuing.”

This is the first such massacre in the reign of Mamata Banerjee’s TMC. The opposition, led by the BJP, has cried for the imposition of President’s rule and Governor Jagdeep Dhankar, who has always been at odds with the state government, has also launched into the incident. Mamata has written a letter to the governor saying this was a larger plan to malign Bengal.

A special investigation team has been set up by the government to take prompt action. Action will also be taken against some policemen.

DGP Malaviya told a news conference that the killings did not seem to have any political connection. This comment of Malaviya, even before the SIT has begun its probe, drew sharp criticism from the Opposition parties.

Anubrata Mondal, the controversial Birbhum Trinamul chief, added fuel to the fire by claiming “TV burst and tar theke agun (the fire was ignited by a TV that exploded).”