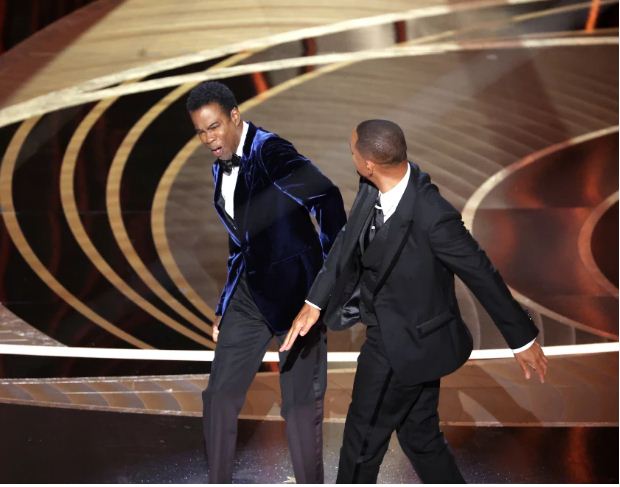 A slap has done Will Smith in. The great actor has been banned from the Oscars gala and other Academy events for 10 years. Smith had slapped comic Chris Rock at the ceremony.

In a statement, the Academy said the 94th Oscars had been “overshadowed by the unacceptable and harmful behaviour we saw Mr Smith exhibit on stage”.

Smith has apologised for his actions and resigned from the Academy. The actor hit Rock for joking about his wife’s shaved head, a result of the hair-loss condition alopecia.

Less than an hour later, he was awarded the best actor award for his role in King Richard, where he played the father of tennis stars Venus and Serena Williams.

Beyond the Academy’s actions, at least two studios – Sony and Netflix – are pausing their projects with Smith.

As curfew was imposed after incidents of arson and vandalism on April 2 in the wake of stone-pelting at a bike rally on the occasion of Nav Samvatsar (Hindu new year), one police constable, Netresh Sharma, risked his life to save lives of four trapped in a burning house.

As the rally was passing through a Muslim-dominated area in Karauli, Rajasthan, trouble broke out.

The rally was taken out by right-wing organisations, including the Vishva Hindu Parishad (VHP), the Rashtriya Swayamsevak Sangh (RSS) and the Bajrang Dal, police said.

Around 35 people were injured in the violence, they said.
During the riots and arson in Karauli houses and shops were set on fire. Three women and a child were trapped in one of the houses. They had lost hope of surviving the arson, but were rescued by the brave police constable. Rajasthan Chief Minister Ashok Gehlot congratulated Constable Netresh Sharma (31) of the Karauli Kotwali police station for saving four people from a burning house on April 2. Gehlot announced that he would be promoted to head constable.

An incensed TV reporter’s invective over ‘Urdu’ writing on a Haldiram’s snack packet directed at a store manager has set off a fierce debate on social media, adding to the siege of the national discourse hijacked by objections to halal meat, the hijab and the Azaan.

The video shows the store manager telling the reporter: “You can do whatever ma’am; Haldiram’s will not entertain such tantrums,” even as t he reporter thrust her mike at her, ranting about “Urdu writing” and “betraying Hindus who fast during Navratri.”

The episode drew widespread condemnation on social media with some suggesting the writing on the packet is Arabic and is there because it is exported to the Middle East while others supplied examples of everything from Indian Railways signages to currency notes using Urdu text.

West Africa is facing its worst food crisis in a decade due to increasing conflicts, droughts, floods and the war in Ukraine. This was reported by nearly a dozen international organisations in a report. The number of West Africans needing emergency food assistance has nearly quadrupled from 7 million in 2015 to 27 million this year in nations including Burkina Faso, Niger, Chad, Mali and Nigeria, where thousands have also been displaced because of rising Islamic extremist violence, the report said.

The number could jump to 38 million by June if action isn’t taken soon to help people in the Sahel, the sweeping region south of the Sahara Desert, the groups warned. “Cereal production in some parts of the Sahel has dropped by about a third compared to last year. Family food supplies are running out,” according to Assalama Dawalack Sidi, Oxfam’s regional director for West and Central Africa.