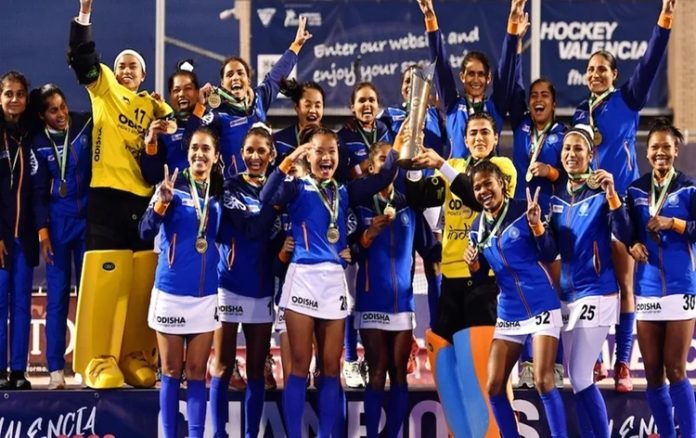 In the super celebration of the FIFA World Cup, what we all forgot was the great victory that Indian women brought home. in hockey, Indian women defeated Spain 1-0 in the final to win the FIH Women’s Nations Cup 2022 in Valencia, Spain on December 18, exactly the day Argentina beat France to win the World Cup in Doha, Qatar.

Indian remained undefeated during the tournament and also got promoted to the 2023-24 FIH Hockey Women’s Pro League. This was the inaugural season of the Women’s FIH Nations Cup, with a promotion to next year’s Women’s Pro League hockey up for grabs for the winner.

Gurjit Kaur scored the all-important goal in the sixth minute from the penalty corner as the Commonwealth Games bronze medallists ended the eight-nation tournament with five wins on the trot.

The home side failed to find the back of the net as Savita stood tall in front of the goal. India were 1-0 up at the end of half time.

Spain began the second half aggressively in search of an equaliser and Savita came off the lines to make a fine save.

India got a chance to score their second goal of the match after they earned a PC but the Spanish goalkeeper was alert and dived to the right of the goalpost to keep her team in the game.

Hockey India has announced Rs 2 Lakh for each player and Rs 1 lakh for each support staff of the Indian Women’s Hockey Team that won the FIH Women’s Nations Cup 2022.

By virtue of winning the Nations Cup, the Indian team has been promoted to the 2023-24 FIH Hockey Women’s Pro League, a key event ahead of next year’s Asian Games and 2024 Paris Olympics.