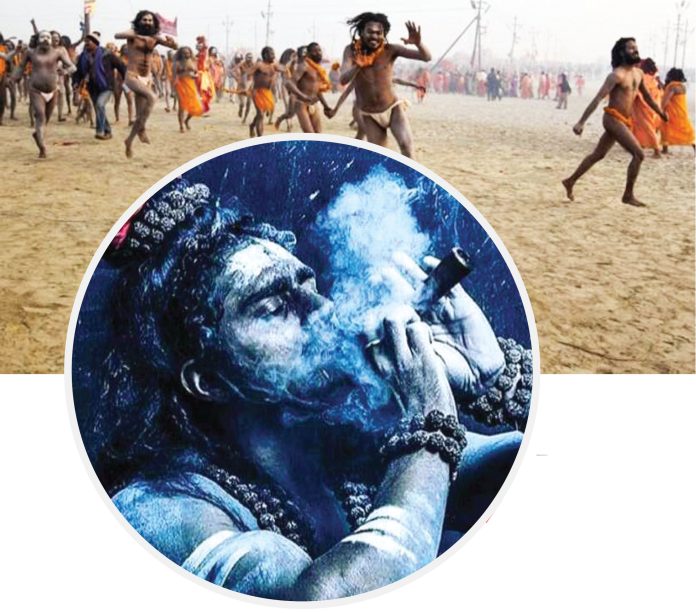 The executives of the World Anti-Doping Agency (WADA) have proved beyond doubt that myths in ancient Indian epics are true. Ancient Indian sadhus, or monks, not only had long lives, they could also run faster than cheetahs, travel longer distances than elephants, were stronger than lions and generally were performing like supermen on steroids.

Their super performance was not due to any magic potion that some hoary-haired druid produced in a special village. All that power came from an ancient Indian herb: in India it is called ganja, internationally known today as marijuana or cannabis.

But, hey, isn’t ganja or cannabis a chaser? Does it not give a real cooling effect, a Nirvana-type stupor? No, it is not. The next time you want to take on the best athlete in your university on the track, just smoke a chillum of this delicious stuff. You’ll fly. Just remember to keep a good lookout for guys in white aprons chasing you later for some urine and blood sample for a dope test.

Dope test for what? Well, you just flew, with all the burgers and deep-fried chicken in your belly, remember? You just beat the field hands down. Doesn’t look good in the public eye, looks worse in the eyes of the World Anti Doping Agency (WADA).

Yeah, we know, the obvious question pops up. Wouldn’t cannabis slow you down instead, make you fly in your mind while your body lies in Samadhi, a sort of self induced coma/stupor? That is the ancient tradition. Well, WADA does not think so. WADA believes cannabis actually enhances performance; that is why it left cannabis in the banned list in its second executive committee meeting held in Sydney on September 22, where the prohibited list for 2023 was finalised.

The executive committee updates each year the List of Prohibited Substances and Methods. These are substances that are prohibited under the World Anti-Doping Code (Code). The new list comes into effect January 1, 2023.

The THC factor
Cannabis comes second on this new list. The banned substance is what cannabis contains – delta9-tetrahydrocannabinol, or THC. The report says that the executive committee has recommended that the “status of THC on the List should remain unchanged.”

Before going into the magical qualities of THC, it needs to be mentioned that there, actually, was an appeal before the executives in September 2021, to drop this from the list. This plea, as per the report, had come from a “small number of stakeholders.”

Cannabis is prohibited in competition only. The report says that a group of “independent, experts in pharmacology, forensic toxicology, substances of abuse, analytical science, pharmacy, sports medicine, chemistry, endocrinology, internal medicine, regulatory affairs, peptides and growth factors, and haematology, from nine countries around the world, embarked on a full and thorough review of the status in sport of THC, the main psychoactive component of cannabis.” The experts are referred to as the List Expert Advisory Group (LiEAG).

That was a big deal, and WADA says: “This review focused on the three criteria set forth by the Code for inclusion of any substance or method on the List, namely:

1.     It has the potential to enhance sport performance;

2.     It represents a health risk to the athlete; and

According to the Code, a substance or method must meet at least two of these criteria to be considered for inclusion in the List.

Within the review, even testimonials from athletes who were/are cannabis users, and published surveys from around the world were considered. As usual, so-called “world-renowned” experts were consulted, yet again.

Then came an interesting paragraph of the report, which said: “With respect to the spirit of sport criterion, the LiEAG consulted with WADA’s Ethics Expert Advisory Group, which continues to consider cannabis use, at this time, to be against the spirit of sport across a range of areas as listed in the Code.”

Ethics is a different ball game, especially when top sponsors of the Olympic movement may want to adhere to the extreme conservatism of the US of A, where most of their offices and businesses are located. If you anger the moneybags, that’s a bad idea.

Hence THC, or in the enlargement of definition cannabis, just cannot be allowed.

However, the WADA explanation is vague. In its report WADA Director General Olivier Niggli said: “The question of how THC should be dealt with in a sporting context is not straightforward. WADA is aware of the diversity of opinions and perceptions related to this substance around the world, and even within certain countries. WADA is also mindful that the few requests for THC’s removal from the Prohibited List are not supported by the experts’ thorough review. We are also conscious that the laws of many countries – as well as broad international regulatory laws and policies – support maintaining cannabis on the List at this time.”

What medics say
It is pertinent here to refer to the medical world in general and not to a select band of “experts” that WADA has accumulated over the years.

The Mayo Clinic, consistently ranked in the US News & World Report rankings of top hospitals and acknowledged among the very best in the US as specialists in cancer, cardiology and heart surgery does not seem to believe Cannabis or marijuana is a known performance enhancer.

Here are some interesting findings of Mayo Clinic. On its website, the clinic says: “Evidence has shown that marijuana can effectively treat chemotherapy-induced nausea. It might also reduce muscle spasms associated with multiple sclerosis and decrease the intensity of neuropathic pain.

“However, marijuana use can cause cognitive impairment and should be used with caution if you have a mental health condition. In many places marijuana use is considered illegal for any purpose.”

What is marijuana, or cannabis?
Marijuana is made from the dried leaves and buds of the Cannabis sativa plant. While the Food and Drug Administration (FDA) of the USA hasn’t approved the use of the marijuana plant as medicine, many states have legalized marijuana use.

Then comes the WADA report killer. It says

Drowsiness and fatigue are surely signs of performance enhancement. Stabilising or even mending muscle fatigue just cannot be tolerated.

Mayo goes on to add: “Long-term marijuana use can worsen respiratory conditions.”

It all boils down to…
In the end it all boils down to two of the three inclusion criteria. “a) it poses a health risk to athletes and c) it violates the spirit of sport.” The essential part, which is item b) “it has the potential to enhance performance” can be jettisoned, yet keeping the ban intact, because two criteria which should not be under the purview of WADA at all, have been considered.

Of course cannabis poses a health risk to athletes; so does smoking. Athletes, especially on the football field, have been known to smoke off the pitch. Brazil’s great footballer Sócrates was a smoker. A visit to McDonald’s will also harm an athlete. Will WADA or the IOC ban them?

That leaves us with the “spirit of sport” concept. What is that? According to WADA itself: “It is the essence of Olympism, the pursuit of human excellence through the dedicated perfection of each person’s talents. It is how we play true. The spirit of sport is the celebration of the human spirit, body and mind, and is reflected in values we find in and through sport, including Ethics, fairplay and honesty; health; excellence in performance; character and education; fun and joy; teamwork; dedication and commitment; respect for rules and laws; respect for self and other Participants; courage; community and solidarity.”

Sounds like a spirited speech at a political rally. Basically, it means that we are subhuman, if we do not adhere to most or at least a couple of those orders from superior minds. “Ethics”, for example, used to mean those who were amateurs only, in the Olympic movement once. That was till the moneybags put pressure on the IOC.

More openly speaking, cannabis is not banned off competition. That means I could be smoking joints all day, but should not light up one on or near the track. Is that honesty?

And about ethics, who is the WADA to define it? In India, the justice system once took a serious view of adultery. Today it is out of the criminal justice system’s purview. Abortion is unethical (even illegal today) in the US, but not in India and a huge number of other countries. Does the US decide? Do the IOC and WADA decide, because they are being forced to deliver certain sermons by major corporations who, in turn are pressured by the government?

The freedom of human choice cannot be hindered unless it harms somebody else. Ganja or cannabis may harm the athlete, but it is barely unethical.