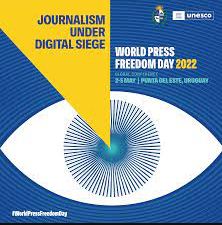 At a time when media is fast losing its freedom, being shackled around the world by profit seeking management ahead of news, and being pummeled into subservience by politics, it becomes important to cautiously celebrate another World Press Freedom Day.

This day is observed every May 3 and in 2022 is expected to bring together stakeholders who could study and suggest ways to beat the continuous hammering against the very values which gave rise to the media.

This year, stakeholders, such as policymakers, journalists, media representatives, activists, cyber security managers and legal experts are expected to put their heads together to explore these issues and develop concrete solutions to address the threats posed by increased surveillance to press freedom and privacy.

UNESCO and the Republic of Uruguay will host the annual World Press Freedom Day Global Conference in a hybrid format in Punta Del Este, Uruguay. Under the theme “Journalism under Digital Siege”, the digital era’s impact on freedom of expression, the safety of journalists, access to information and privacy will be discussed.

Every year, May 3, is a date which celebrates the fundamental principles of press freedom, to evaluate press freedom around the world, to defend the media from attacks on their independence and to pay tribute to journalists who have lost their lives in the exercise of their profession. World Press Freedom Day was proclaimed by the UN General Assembly in 1993 following a Recommendation adopted at the twenty-sixth session of UNESCO’s General Conference in 1991. This in turn was a response to a call by African journalists who in 1991 produced the landmark Windhoek Declaration(link is external) sur le pluralisme on media pluralism and independence.