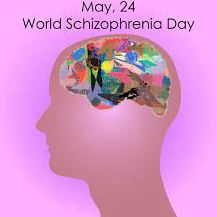 Schizophrenia is a serious mental illness affecting more than 21 million people worldwide according to the World Health Organization. The purpose of this day is to spread awareness about this illness, eradicate the myths and superstitions around mental illnesses in general.

A common myth surrounding schizophrenia is that people suffering from it have a split personality. However, this is completely untrue. Schizophrenia patients have just one personality, just like everyone else. Common symptoms of schizophrenia include confused thinking, delusions and hallucinations.

The term ‘schizophrenia’ literally means “a splitting of the mind” and was coined in 1910 by Swiss psychiatrist Dr Paul Eugen Bleuler.

Schizophrenia starts in early adulthood or late adolescence, typically between the ages of 15 to 28.

Men also have a higher risk of suffering from the illness than women. Men have an earlier onset age than women. They also tend to suffer from a more severe form of the disease with more negative symptoms, less chance of a full recovery and a worse outcome.