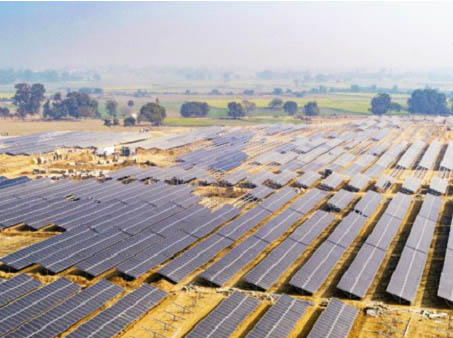 Uttar Pradesh’s blueprint to catch the green energy revolution is on course. The Yogi Adityanath government’s Solar Energy Policy 2017 had shown double benefits, the first being that of reaching non-fossil fuel goals of the state and the second being the great employment that it has generated.
How has this been achieved?

This is a village-oriented project, supplementing the existing electricity grid, thereby making availability of power more steady even in distant centres.

What has the government said about this? In the last few years solar power projects of a total capacity of 1,370 MW have been commissioned. Furthermore, another 417 MW of capacity is under construction (see picture).
To this end, the state has been able to attract big investments. A government spokesman has been quoted as saying: “The government has set a target to achieve 10,700 MW capacity solar power generation by the year 2022, and is working on plans for setting up a solar park and an ultra-mega solar park in the state.”
That is a big target, but the way the state is progressing, this seems reachable.

However, another big story, along with the developmental side, is the permanent employment generated for thousands of people in these projects. Together these have added to the benefit of villages and the rural society in general, even adding to the cleansing of the environment in the process. These type of renewable energy projects have been the cornerstone of the Bharatiya Janata Party administration across the country and in UP this has borne fruit early.

The Solar Energy Policy 2017 provides open access to companies for the establishment of solar park and third-party sale of solar energy. As per this policy, 100 per cent stamp duty exemption and 100 per cent exemption in electricity duty for 10 years is being given to investors through online single window clearance system.

This has led to 11 private companies in solar energy sector set up their plants in seven districts of the state, namely Bundelkhand, Banda, Chitrakoot, Hamirpur, Mahoba, Jalaun, Jhansi and Lalitpur to date. The solar power units are generating more than 550 MW of electricity daily.

Besides, the REC Power Distribution Company is setting up a 50 MW solar power plant in Kanpur (Dehat) and 75 MW solar plant in Jalaun.

Furthermore, 19,579 solar pumps have been installed to benefit farmers.