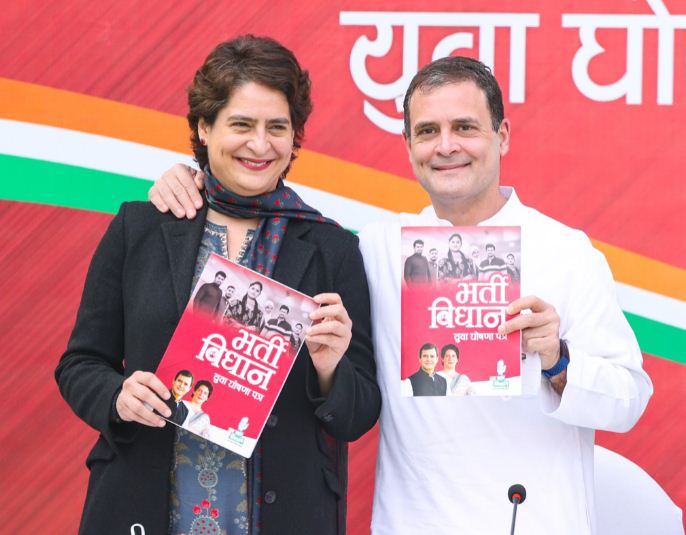 We are on a series of elections and have come a long way. But we have missed something. At one time, Congress meant politics and politics meant Congress. Today the scenario has totally changed. Today we say the same thing for Bharatiya Janata Party (BJP).

In the upcoming elections in the state starting February 10 not many are talking about the Congress. Priyanka Gandhi Vadra was releasing the party’s youth manifesto in New Delhi, with Rahul Gandhi (picture above) recently, when journalists asked who is the Congress’ chief minister face in UP. To that Priyanka said with a smile: “Are you seeing any other face from the Congress? Then? (Dikh toh raha hai na sab jaga mera chehra).”

How can it be possible that we discuss elections, and miss the Congress? This is not our fault. The fault is of the Congress itself. The party has been away from active politics in the state for too long a time. Many young people today do not even know when the Congress was in power in Uttar Pradesh.

Uttar Pradesh was formed in January 1950. Before January 26, 1950, Uttar Pradesh was a part of the United Province. Today it is the state with the largest population in India. The first Chief Minister of Gobind Ballabh Panth. He was in the chair from January 1950 to December 1954. He was a Congressman.

Pant was a freedom fighter and close to the Nehru-Gandhi family. He hailed from Almora, and was given the Bharat Ratna in 1957.

The Congress CM of UP was Narayan Dutt Tiwari, an erudite and seasoned politician and son of a freedom fighter from Kumaon. He was also India’s foreign minister in the Rajiv Gandhi cabinet. He was in power till December 1989, after which the most charismatic leader of the state, ex wrestler Mulayam Singh Yadav, became the first Yadav CM of the state. He was from the Janta Dal and formed his own Samajwadi Party later.

Mulayam rang in the end of the Congress era in UP. That was 5 December 1989, when Mulayam became chief minister. It has been over 32 years now that the Congress party has been sleeping its way through several elections.

If her comment is any indication that Priyanka Gandhi might be contesting the polls, there has been no comment so far from any Congress corner. If she does, it will be a tough contest for her, as well as for her rival.

Let us see what happens.