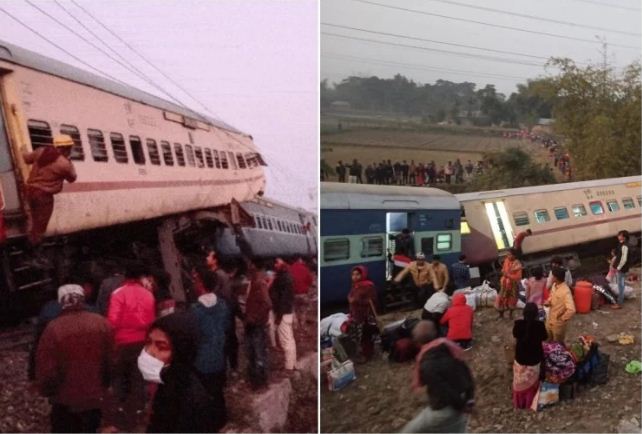 Nine  people died in the Bikaner-Guwahati Express train derailment near Moynaguri, in West Bengal’s Jalpaiguri district. The accident happened on January 13, for reasons yet to be confirmed. 42 people were hospitalized after being injured. While areas in other parts of the country have been foggy, this may not have been one of the reasons here. Also, the accident did not happen at night. Plus, news reporters, who have interviewed rescued passengers, have said that the train was not travelling fast at the time of the derailment.

Railways Minister Ashwini Vaishnaw was personally monitoring the situation and apprised PM Narendra Modi about the rescue operations. Of the injured, 28 were admitted to Jalpaiguri district hospital and 7 were sent to Moynaguri government hospital. Seven critical passengers were shifted to the North Bengal Medical College in Siliguri.

An ex gratia payment of Rs 5 lakh has been announced for the kin of the deceased, Rs 1 lakh for those who receive grievous injuries and Rs 25,000 for those who suffered simple injuries.

World’s  No 1 tennis player Novak Djokovic was forced to leave Australia, without playing in the Australian Open, when the government deported him. Djokovic is one of non-believers in vaccination and he refused to abide by the Covid norms of the country. While the Serb did get supporters in Australia for his unusual stand, the courts and the government refused to allow him to play.

This ended his hopes of defending his Australian Open title. His lawyers had argued in an Australian court on Sunday that he should be allowed to stay in the country and compete in the tournament under a medical exemption due to a coronavirus infection last month.

Djokovic is the best men’s tennis player on the planet today. He has won nine Australian Open titles, including three in-a-row, and a total of 20 Grand Slam singles trophies, tied with rivals Roger Federer and Rafael Nadal for the most in the history of men’s tennis. Federer is not playing while recovering from injury, and Nadal is the only former Australian Open men’s champion in the tournament that began Monday.

It has to be added that Nadal, too, is not in best physical condition and the entire glamour of the Open depended on Djokovic’s presence.

Serbian President Aleksandar Vucic has accused the Australian government of “harassing” the top-ranked tennis star and urged him to return where he would be welcomed. Djokovic had tested positive with coronavirus in Belgrade on December 16. This, he used as an argument to enter Australia, but his visa was initially cancelled on January 6 by a border official who decided he didn’t qualify for a medical exemption from Australia’s rules for unvaccinated visitors.

Covid  is back with a vengeance across the county, and it is time again for schools to shut its doors on its hapless students. In Madhya Pradesh, the government ordered shut all government and private schools from class 1 to 12. This order takes effect on January 15, and will be in force till January 31.

The government has also banned all political and religious gatherings and fairs.

Parents and other organizations had been clamouring for the closure of schools for a while, as parents were being continuously being infected. Finally, in his meeting with the Crisis Management Committee, Chief Minister Shivraj Singh Chouhan said that cases will increase more rapidly in the third wave of Corona. In view of the rapid increase in daily cases, it has been decided to keep the schools closed for 15 days, he said. He, however, said that there is no ban on ‘snan’ on Makar Sankranti.

This  is the season of gains for the Tata group. Following the purchase of Air India, now the group has laid its hands on another great product of the country: The IPL. The Tata group has replaced Chinese smart-phone maker Vivo as the title sponsor of the Indian Premier League.

The Tata group, with a market cap of nearly $300 billion, is one of India’s largest business conglomerates. It will, as of now, take over the sponsorship for the last two years of the tenure for which Vivo had a contract. Vivo ends its contract before due time. This decision was taken by the IPL’s governing council in a meeting on January 11. The decision was announced by IPL chairman Brijesh Patel.

Vivo’s deal was worth Rs 2,200 crore for title sponsorship rights from2018 to 2022, but after the 2020 Galwan Valley military face-off between the Indian and Chinese soldiers, the brand took a break for a year with Dream11 replacing it. Vivo returned as title sponsor in 2021, but they were looking to transfer the rights to a suitable bidder and the BCCI approved the move.

The  budget session of Parliament will commence on January 31. While Union Finance Minister Nirmala Sitharaman is scheduled to present the Union Budget on February 1, assembly elections 9 days later will present her a problem on how she handles the model code of conduct of the Election Commission, which is in force.

Covid, however, will present a problem. Recently more than 400 staff members of Parliament had tested positive for Covid-19. Even Congress’ Mallikarjun Kharge, Leader of the Opposition in the Rajya Sabha, is now down with Covid. He is expected to recover by then, though.