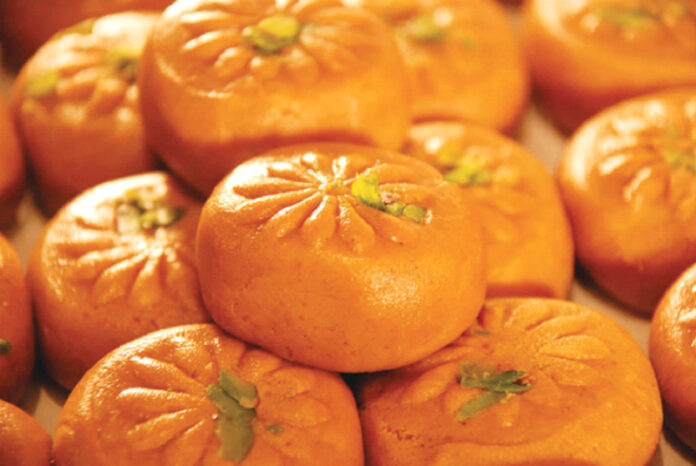 Varanasi’s Lal Peda
This is a very special sweet, special to Varanasi. It is known as lal peda (or red peda). The most famous lal peda shop in a Varanasi is Vijay Jalpan Grih and Uday Shri Mishthann Bhandar where the sweet is made by fourth generation of sweetmakers. A kg of this amazingly delicious sweet will cost you around Rs 350. Vanaransi is famous for its traditional flavours and this is a must eat dish for sweet junkies.

Mathura Peda
Residents of Mathura claim that the peda originated in this ancient city. Generally, Mathura in Uttar Pradesh, also called Braj Bhoomi, is famous for its culinary delicacies as it is for its temples. Mathura peda traces its roots to ancient times when pedas were almost indispensable at religious festivals and ceremonies. These sweets were commonly offered as Prasad, following offerings to God. This practice continues at the famous temples. Several sweet shops around temple premises will sell these pedas, but there are some special shops which are known far and wide, which are the genuine conservators of tradition.

This, almost ubiquitous, sweet is essential during Krishna Janmashtami festivities. The ingredients are similar to the Varanasi lal peda, but an addition here is saffron. Since saffron is very expensive, that ingredient may be available in only a handful of shops. The general peda available will not have that.

Some of the famous shops: Brijwasi Sweets at Chowk Bazar and Radhika sweets, Krishna Nagar.

Dharwad peda(Karnataka)
this is a later addition to the peda tradition of India. Yet, this has become almost as famous as Mathura pedas. Actually, Mathura pedas reached such legendary status, that the cuisine was replicated south of the Vindhyas too by an Unnao (near Lucknow) sweet maker.

Even though it is recent Dharwad peda, mainly from Dharwad city in North Karnataka has a history of no less than 175 years. The makers of the peda here, as well as the government of the state had applied for a GI tag for this product and on January 24, 2007, they were awarded the tag. The tag went to Thakur’s Dharwad Pedha Manufacturers’ Welfare Trust, No. 482. The trust is at Thakur’s building (Near Sri Rama Temple), Line Bazaar, Dharwad 580001, Karnataka. The category is ‘Food Stuff’.

So, even though Mathura has a longer history, the GI tag is held by Karnataka.

The history behind this is interesting and dates back to the early 19th century, when Uttar Pradesh in the grips of a deadly plague. A few members from a Thakur family migrated from Unnao to Dharwad. Shri Ram Ratan Singh Thakur started making pedas to make ends meet, while his grandson Babu Singh Thakur elevated the humble sweet to a sensation. The pedas sold at Babu Singh’s shop in Line Bazaar soon became famous as Dharwad pedas.

The sweet seems simple to make, but it is the dedication of some of the best in the business that adds that special and delicate flavour and texture to it.

Dharwad pedas look deceptively simple. It is not like its flat versions of the north of the country, but its shape is irregular. Somewhat elliptical, and has a grainy texture and a veneer of semolina.

The ingredients are, of course, same, and it is the difference in the way they are made that makes it famous.

Babadham (Baidyanath) peda:Deogarh, Jharkhand
Pedas from Baidyanath Dham and Deogarh have been famous for ages. It ranks as high as the wide variety of roses at the nearby 52-bigha nursery. People from Deogarh and Baidyanath Dham will swear by its delicate taste – the sweet is so balanced, it will never leave any unsatisfactory aftertaste — and its superiority over all pedas available in any part of India.

Being an ultra holy place, where Lord Shiva has ruled supreme, pedas have mingled intricately with the ethos of the place. The place, is one of the 12 Jyotirlingam and one of the 51 Shaktipeeths, so receives millions of visitors each year. The popularity of the pedas here spread quickly.

Now, the Babadham peda of the temple town Deoghar might also get a Geographical Indicator (GI) tag. Not too long back, Deoghar’s Deputy Commissioner Kamleswar Prasad Singh had said that for branding and marketing of Babadham peda, the district administration has decided to apply for GI tag.

Originally, this peda had a big difference vis-a-vis ingredients, from the other pedas. Instead of cow’s milk, Babadham pedas used camel’s milk (now often used in the powdered form). Hence the khoya is also different, so is the taste.

Satara Kandi Peda: Maharashtra
This is an interesting addition to the peda history of India. It is nearly a 200-year old story, in early British rule. It has been said that the British regiment was also stationed at Chhatrapati’s Sansthan in Satara. They had a habit of eating sweets and would always be in search of different sweets.

It is said that somebody boiled the milk in a pan and added sugar or jaggery. As the mixture thickened, they were made into small balls, filled in a canister and presented to British authorities. The British loved this dessert. They called it by a generic name “candy”, but essentially it was a peda.

It is also said that the ninth descendant of Chhatrapati Shivaji Maharaj had brought a family of confectioners from the village of Khadkalat on the Maharashtra-Karnataka border to Satara. The candy they made became popular. Later he came to be known as Latkar.

The secret recipe of Kandi Pedha of Satara is that these pedas are double roasted.
You can buy these at Kalyani Sweets at Shivaji Circle in Powai and also at Latkar Sweets at Sadar Bazar.